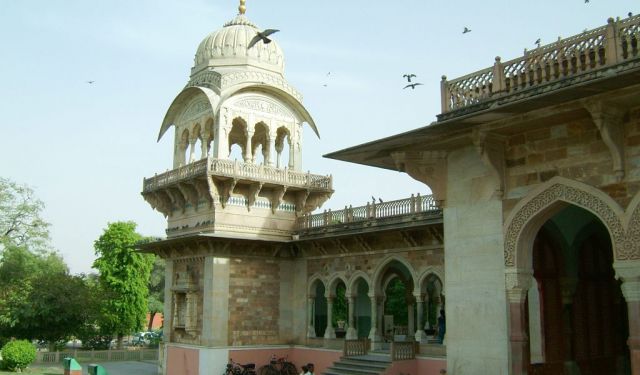 Image by Acred99 on Wikimedia under Creative Commons License.

The picturesque city of Jaipur, capital of the Rajasthan state, boasts a rich culture and heritage. Visitors can experience this culture through the city’s many great art galleries, museums and palaces in which they are set. Take our walking tour to see the most interesting cultural attractions in Jaipur.
How it works: Download the app "GPSmyCity: Walks in 1K+ Cities" from iTunes App Store or Google Play to your mobile phone or tablet. The app turns your mobile device into a personal tour guide and its built-in GPS navigation functions guide you from one tour stop to next. The app works offline, so no data plan is needed when traveling abroad.

City Palace, Jaipur, which includes the Chandra Mahal and Mubarak Mahal palaces and other buildings, is a palace complex in the capital of the Rajasthan state. It was the seat of the Maharaja of Jaipur, the head of the Kachwaha Rajput clan. The Chandra Mahal palace now houses a museum but the greatest part of it is still a royal residence. The palace complex, which is located northeast of the centre of the grid patterned Jaipur city, incorporates an impressive and vast array of courtyards, gardens and buildings.

The palace was built between 1729 and 1732, initially by Sawai Jai Singh II, the ruler of Amber. He planned and built the outer walls, and later additions were made by successive rulers right up to the 20th century. The credit for the urban layout of the city and its structures is attributed to two architects namely, Vidyadar Bhattacharya, the chief architect in the royal court and Sir Samuel Swinton Jacob, apart from the Sawai himself who was a keen architectural enthusiast. The architects achieved a fusion of the Shilpa Shastra of Indian architecture with Rajput, Mughal and European styles of architecture.

Image by Sandeep sharma on Wikimedia under Creative Commons License.
Sight description based on wikipedia
2

Image by Citypeek on Wikimedia under Creative Commons License.
Sight description based on wikipedia
3

The Gem Palace is the perfect place to buy exceptional jewelry. Celebrities, such as Hollywood stars and princesses have shopped here. Founded in 1852, the palace also holds a number of interesting antique pieces with precious stones that are not for sale, but can be seen and admired.
Image by Luis García on Wikimedia under Creative Commons License.
5

Established in 2003, the Samanvai Art Gallery is a modern facility that houses both traditional and contemporary art. Located in Ganpati Plaza, this large art museum has various exhibitions and workshops that attract art lovers from all over Jaipur. Its works include beautiful paintings by famous artists from all over India.