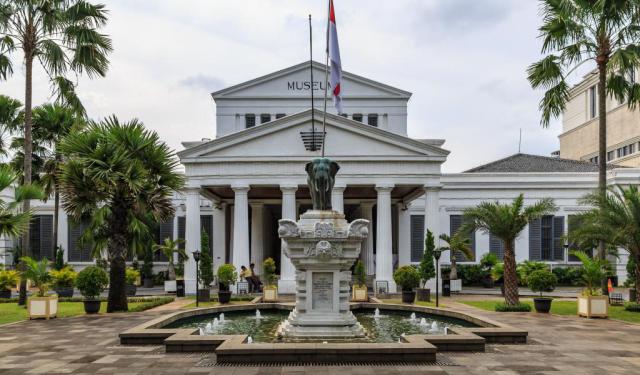 Jakarta is an old city that has seen a lot of change over the course of its 1,700-year history. Today you can see a lot of fascinating buildings and other sites that show the imprint history had on the city, particularly by British and Dutch colonization. Historic places of worship also pay testament to the popularity of Buddhism and Confucianism over the course of time. Take our two-part tour to discover the most important historic sites in Jakarta.
How it works: Download the app "GPSmyCity: Walks in 1K+ Cities" from iTunes App Store or Google Play to your mobile phone or tablet. The app turns your mobile device into a personal tour guide and its built-in GPS navigation functions guide you from one tour stop to next. The app works offline, so no data plan is needed when traveling abroad.

The building’s exterior can be admired from the Merdeka Square, while the inside of the building can be visited under strict rules of security. Special checking will be performed and only persons dressed decently will be allowed inside. Women wearing trousers are not granted access into the building.

Image by MichaelJLowe on Wikimedia under Creative Commons License.
2

Located opposite the Merdeka Palace and facing the Ciliwung River, in an exquisite neighborhood of old Batavia, Istana Negara or State Palace is a neoclassic building originally featuring two stories. The Negara Palace was built in 1796 and served as accommodation for J. A. van Braam, a Dutch businessman. In 1820 the building was sold to the Dutch authorities and became the official residence of the General-Governor during his stay in Batavia.

In 1848, the second story was demolished and the ground floor was enlarged so as to make the building more suitable for formal events and diplomatic meetings.

Nowadays Istana Negara serves as a venue for official meetings, presidential visits and state affairs. Banquets and formal events are also held inside the Negara Palace.

Visitors are allowed only after a thorough check. Women wearing trousers are not granted access into the palace.

Image by Tropenmuseum, part of the National Museum of World Cultures on Wikimedia under Creative Commons License.
3

Visitors can admire the marble-covered exterior from different parts of the city, but can also take a tour of the Mosque. Non-Muslim visitors are not allowed inside the main praying hall, though.
Image by MichaelJLowe on Wikimedia under Creative Commons License.
4

The building is divided into two stories: the ground floor is dedicated to masses and religious events, while the second floor, originally designed to hold the choir, hosts a small religious museum. Visitors can admire here robes, religious books and relics of the Catholic rituals. In the back of the church there is a small candle factory which can also be visited.
Image by monica.renata on Flickr under Creative Commons License.
5

Irian Jaya is a very important monument for the people of Indonesia that was built to mark the liberation of Irian Jaya (New Guinea) from the Dutch in 1963. The monument depicts a man breaking free from a chain and shackle with wide open hands. It was erected by Soekarno, Indonesia’s first president.
Image by Davidelit on Wikimedia under Creative Commons License.
6

The Ex-Mahkamah Agung, which has witnessed some of the most important justice resolutions, has functioned as Supreme Court during Dutch colonization as well as after the proclamation of Indonesia’s Independence. Nowadays, the Supreme Court has moved in the Freedom Square, next to the National Monument. Still, visitors can enjoy the elegant silhouette of the Ex-Mahkamah Agung, with its white columns and stylish architecture featuring European elements. A visit inside the building is possible and it is free of charge. However, a written notice is required three days in advance.
Image by Tropenmuseum, part of the National Museum of World Cultures on Wikimedia under Creative Commons License.