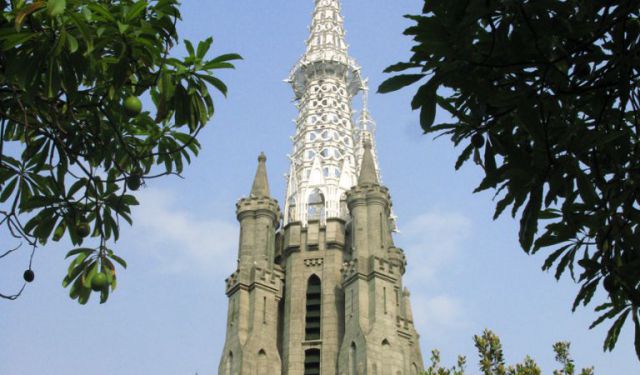 Image by monica.renata on Flickr under Creative Commons License.

Indonesia has six official religions: Catholicism, Protestantism, Islam, Confucianism, Hinduism, and Buddhism. Most of these faiths began here during the country’s colonial times. Thanks to the city’s religious diversity, Jakarta is home to a large number of wonderful churches, temples and mosques that a visitor can admire on this tour.
How it works: Download the app "GPSmyCity: Walks in 1K+ Cities" from iTunes App Store or Google Play to your mobile phone or tablet. The app turns your mobile device into a personal tour guide and its built-in GPS navigation functions guide you from one tour stop to next. The app works offline, so no data plan is needed when traveling abroad.

The Klenteng Sentiong is a beautiful temple that combines Dutch and Indonesian styles across its two floors. Attended by both Buddhists and Hindus, the temple has many statues from both faiths.
Image by lkmal on Flickr under Creative Commons License.
2

Vihara Maha Vira Graha is a richly decorated Buddhist temple with many sculptures, pictures and other religious pieces inside. Many locals come here to pray and meditate. The temple also has a library and clinic open to all.
Image by cassandrajowett on Flickr under Creative Commons License.
3

The Vihara Tri Ratna is a 300-year-old Buddhist temple. Dedicated to the deities Thi Cong Wong Pho Sat and Kuan Yin, it is designed to symbolize the three dimensions of past, present, and future. Many locals come to visit the special prayer room here.
Image by williamcho on Flickr under Creative Commons License.
4

The Pniel Gereja Ayam is a Dutch Protestant Church designed by architects Cuypers and Hulswit. Established in 1915, it was first known locally as the New Church before being dubbed the Chicken Church after the figure on its roof.
Image by Esteban Chiner on Flickr under Creative Commons License.
5

The building is divided into two stories: the ground floor is dedicated to masses and religious events, while the second floor, originally designed to hold the choir, hosts a small religious museum. Visitors can admire here robes, religious books and relics of the Catholic rituals. In the back of the church there is a small candle factory which can also be visited.

Image by monica.renata on Flickr under Creative Commons License.
6

Visitors can admire the marble-covered exterior from different parts of the city, but can also take a tour of the Mosque. Non-Muslim visitors are not allowed inside the main praying hall, though.

Image by MichaelJLowe on Wikimedia under Creative Commons License.