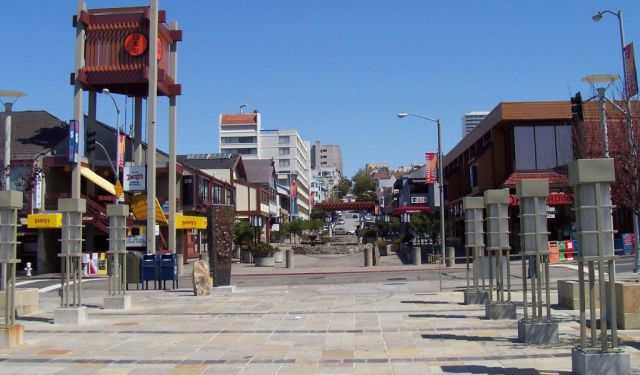 Image by Christopher Beland on Wikimedia under Creative Commons License.

Japantown in San Francisco is the oldest Japanese community in the continental United States. The first Japanese immigrants came to San Francisco in the 1860s. Located in the heart of San Francisco, this six block area is a colorful, friendly community, that is home to some of the best Japanese cultural, eating and entertainment venues in the United States. Take this tour to explore most visited tourist sights of Japantown.
How it works: Download the app "GPSmyCity: Walks in 1K+ Cities" from iTunes App Store or Google Play to your mobile phone or tablet. The app turns your mobile device into a personal tour guide and its built-in GPS navigation functions guide you from one tour stop to next. The app works offline, so no data plan is needed when traveling abroad.

Konko-Kyo is a relatively new religion that is attracting a lot of adherents these days, especially in the United States. This religion originated in Japan a mere 150 years ago but it has taken firm root in many Japanese communities, both, at home and across the world. The Konko-Kyo faith has its origins in Japanese Shintoism but it is considered by its followers to be an entirely different religion. The Konko-Kyo Church of San Francisco which was founded in 1930 is fast becoming very important to the Japanese community in the city.

The Konko-Kyo Church of San Francisco opens its doors to people from all faiths because one of the beliefs of this religion is that it is important to respect other religions and the paths taken by people towards spiritual fulfilment. There are many more admirable tenets that this faith has. One of the most important ones is that the believers have to live their faith in service to one another and to the entire world. As a result, this Church has always been at the forefront of community activity. This has been easily observed when Japan or any other country has been hit by tragedies and the people needed succour. The Konko-Kyo Church of San Francisco has always been very visible in its service to humanity.

Service is held every Sunday morning but the Church is open every day from 8 am until 6 pm. People can visit the church during these times for worship or have a talk with the Minister.

Image by Austin Otaku on Flickr under Creative Commons License.
2

The Christ United Presbyterian Church is the oldest church of Japanese Christians in the United States. Established in 1885, it was called the First Presbyterian Church of San Francisco. Dr Ernest Sturge became the Superintendent of the Japanese Missions in 1886 and worked with the church in its evangelistic reforms and setting up of the local Christian community.

The Church then became the Japanese Federation Church of Christ in the year 1916 and relocated to 1500 Post Street in the area called Japantown within the city. By the late 1930s, the Nisei or the second generation of the Japanese born in the US had become older. Born and brought up in America, the community had now become bilingual and the Church started its services in English.

The Executive Order 9066 during the Second World War forcefully sent people of Japanese origin to concentration camps. Upon their return in 1945, the Church served as a shelter for the homeless people of the community. The community then spent the next decade rebuilding itself by participating in society reforms. In 1975, the city’s Redevelopment Agency forced the Church to relocate once again to its current location, 1700 Sutter Street.

The Church caters to Christians of multiple ethnicities and hosts activities for children, youths and adults and special summer camps too.

Image by tiffa130 on Flickr under Creative Commons License.
3

Sokoji Temple located in Japantown, San Francisco was established in 1934, and is a Zen Buddhist temple. The temple's current building was constructed in 1984. Both, the interior and the exterior of the building reflects the Japanese architectural style.
Image by Austin Otaku on Flickr under Creative Commons License.
4

The Buchanan Mall Gate is one of the most famous cultural landmarks in Japantown. It is located at the Sutter Street entrance. The gate, completed in 1976, was designed to symbolize a Japanese mountain temple gate and to create a “natural garden” atmosphere for the Mall.
Image by brittatv on Flickr under Creative Commons License.
5

Benkyodo Company opened in 1906. It is one of the oldest and the last remaining manufacturers of mochi and manju in San Francisco. Besides the bakery counter, there is a lunch counter that serves as a local hangout and a place to meet, offering standard American cuisine, such as sandwiches and hot dogs.
Image by Dddeco on Wikimedia under Creative Commons License.
6

In the year 1912, Soko Bukai, an organization of Japanese Churches and Issei (First Generation Japanese) women in San Francisco set up the Japanese YWCA to meet the social needs of women and young girls in the community. By 1920, the services of the YWCA extended beyond the three churches which were part of the Soko Bukai and the YWCA decided to purchase the building at 1830 Sutter Street. The Japanese YWCA seeked help from the San Francisco YWCA for purchasing the building since the Alien Land Law prohibited immigrants from purchasing property in the country.

Held in trust by San Francisco YWCA (SF YMCA), the structure underwent renovations to add the dormitory, meeting room, a Noh theatre stage and a Japanese garden as part of architect Julia Morgan’s voluntary services in 1932. The Second World War forced the Japanese immigrants into concentration camps and only a few returned after the War. The Japanese American community was distinctly reduced and interest in the Japanese YWCA diminished until 1996, when the SF YWCA decided to sell the building on Sutter Street.

The Japanese American community united to prevent this sale and moved the court against the sale. Years of litigation and thorough research of the SF YWCA’s meeting minutes finally bore fruit when the decision was given in favour of the Japanese YWCA. The building was bought by Nihonmachi Little Friends, a non-profit and private organization which provides quality childcare to preschool children of Japanese-American descent.
Image by mattyj556 on Flickr under Creative Commons License.
7

Japanese Cultural and Community Center of Northern California was founded in 1973. Its main aim is to meet the evolving needs of the Japanese American community through an extensive offering of programs, affordable services and facility usage. The JCCCNC facility is a two-story, 21,000 square foot building, planned and equipped for multi-service activities.
Image by BrokenSphere on Wikimedia under Creative Commons License.
8

The Japan Center is located in the heart of San Francisco. It opened in 1968. The Center is comprised of the Kinokuniya Building, Kintetsu Mall, and Miyako Mall, with the stunning Peace Plaza towards the middle. Here you will find a wide range of Japanese restaurants and shops with clothing, pottery, teapots, plates, bowls and chopsticks from Japan, as well as music and other cultural exports.
Image by BrokenSphere on Wikimedia under Creative Commons License.
9

Japantown Peace Plaza was created in the mid-1960s. It is an outdoor venue for many community celebrations. The Plaza features the Peace Pagoda, a nine-ringed spire symbolic of the "highest virtue", topped with a "golden ball", symbol of eternal peace. Here, visitors will find the California Japantown Landmark, a permanent outdoor historic exhibit that unifies and tells the history of Japanese American communities in each of the three remaining historic Japantowns in the State of California.
Image by Christopher Beland on Wikimedia under Creative Commons License.

Telegraph Hill offers an unexpected and delightful getaway in the heart of San Francisco. The name Telegraph Hill came from a structure built on the top of the hill in the mid-1800s, which would visually signal the city with regard to the type of vessels passing through the Golden Gate. It is famous for the spectacular stairways that traverse some of the city's most charming terrain, and for...  view more

Bursting with popular tourist attractions and diverse neighborhoods, San Francisco is considered to be a "wonder to behold". Full of museums, religious buildings, parks and amazing architecture, this city can keep any tourist busy for his entire trip. Take this walking tour to explore San Francisco's most visited tourist attractions.

San Francisco Chinatown is the largest Chinatown outside of Asia and the oldest Chinatown in North America. It provides an astounding abundance of varied merchandise at surprising prices, a great selection of restaurants and gift shops. San Francisco's Chinatown features several amazing attractions that can be enjoyed, ranging from museums and churches, to specialty shops and restaurants....  view more