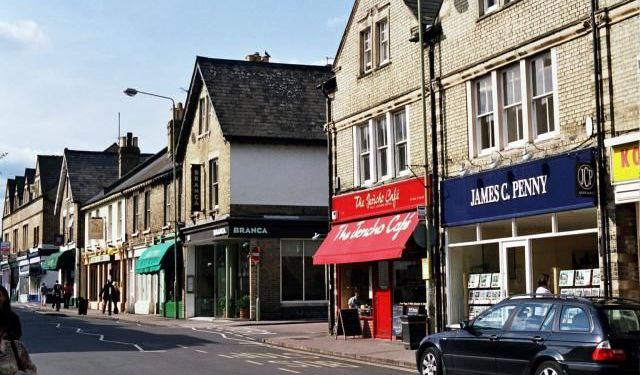 Image by Rosalind Mitchell on Wikimedia under Creative Commons License.

Jericho is a historic suburb of Oxford. Initially an industrial area, it has developed grace to the presence of Oxford Channel. Nowadays Jericho has a lot of venues and landmarks to offer. Take this tour and see the main attractions in Jericho.
How it works: Download the app "GPSmyCity: Walks in 1K+ Cities" from iTunes App Store or Google Play to your mobile phone or tablet. The app turns your mobile device into a personal tour guide and its built-in GPS navigation functions guide you from one tour stop to next. The app works offline, so no data plan is needed when traveling abroad.

When you are in the Jericho area of Oxford, don’t just pass by St Sepulchre’s Cemetery, whose entry is on Walton Street; take a little time to stroll through it and observe the wildlife that now lives there among the ancient tombstones.

Following the Reformation a problem emerged in Oxford and most other English cities. More and more families wanted to build family vaults in their parish churchyards and other people wanted their tombs to rest undisturbed for perpetuity. With the rapidly growing population, parish graveyards were hard-pressed to find adequate space for everyone.

This problem came to a head in 1831 and later in 1849 during two cholera epidemics that ravaged the city. The authorities were obliged to close all parish church graveyards to avoid hygiene problems and three graveyards were created, none of them attached to any particular church; St Sepulchre’s Cemetery covered the northern part of Oxford.

The cemetery took over land that was bought from St John College and the former Walton Manor Farm that had been abandoned at the beginning of the 19th century. The farm’s gateposts still mark the entrance to the cemetery, but the lodge next to them was built in 1865 by Edward Bruton.

After the last epidemic the cemetery was the final resting place for many local families before being closed. Among the rather lopsided tombstones, you will find the graves of Thomas Combe, a Superintendent of the Oxford University Press, John Cavell, once the mayor of Oxford and Benjamin Jowett, Master of Balliol College and later Vice-Chancellor.


Image by Kaihsu Tai on Wikimedia under Creative Commons License.
2

The Phoenix Picturehouse in Jericho is a nice place to go to and enjoy the time spent. It was opened in 1913 as the North Oxford Kinema. The cinema went through many transformations and now it has a two-screen room and a friendly café-bar area. It offers a unique program of art house and classic movies.
Image by decltype on Wikimedia under Creative Commons License.
3

The Jericho Tavern is a venue situated in the center of Jericho area. The tavern offers a simple menu of tasty food and a large variety of draught beers and other spirits and drinks. It is known for providing live events and maintains a tradition of promoting new bands. Radiohead made their debut here.
Image by lxsocon on Flickr under Creative Commons License.
4

The Oxford University Press building stands on the corner of Great Clarendon Street and Walton Street in the Jericho area of the city. You can visit the OUP Museum by appointment.

The OUP is the biggest university press in the world and has offices all over the globe. The whole story began in 1480 two years after Theodoric Rood brought his wooden printing press from Cologne and set it up in the city. The first book printed was a copy of «Exposito in symbolum apostolorum» by Rufinus.

The University began to get involved in printing Bibles and other theological and educational texts. In 1633 OUP’s legal status was consolidated under the Great Charter that Archbishop William Laud obtained from King Charles I. This Charter permitted the university to print books outside the theological sphere.

In 1713, the Clarendon Building on Broad Street was built especially to house the OUP and it stayed there until 1825. The building you will see today was constructed by Edward Blore and Daniel Robertson.

The OUP was responsible for editing and printing the first Oxford English Dictionary in the 19th century. In 1834 it bought its own paper mill, and spread its wings, setting up offices in America and India.

For over 100 years the OUP has been responsible for printing books in every domain from stories for children to World Classics.
Image by TheCreativePenn on Flickr under Creative Commons License.
Sight description based on wikipedia
5

Since its foundation, Oxford University has been the seat of higher education for the rich and the privileged; even the most intelligent children of the working and middle classes couldn’t hope to be admitted to the university until Ruskin College was created in 1889.

The college was founded by two American students who had studied at Oxford, Charles and Walter Vrooman. Walter’s wife, Anna put up the funds for the college, which stands on the corner of Worcester Place and Walton Street in the Jericho district.

The building took over several houses which were converted for the college in 1903. The ground floor façade is in the Georgian style; the upper storeys are simple red brick, but this doesn’t detract from its air of timeless elegance. The name of the college is inscribed over the main entrance.

The college caters for students from middle and working class families who want to study syndicate and trade union law, politics and social science. It is independent from the University, but closely connected to it nevertheless and students can attend lectures and use the university libraries.

The college also offers adult education for those who want to take a university degree later in life. Its ideology has inspired many forward thinking people, such as Ghandi, who visited it in 1931.
Image by shimgray on Flickr under Creative Commons License.
6

The Oxford Jewish Congregation is an unique community in Oxford. Its main purpose is to provide for the needs of Jews. Even if the centre is small in size, it offers enough space for all the people that want to take part in prayers and other activities. The main services here are orthodox, but there are groups that have alternative services.
Image by zeevveez on Flickr under Creative Commons License.
7

The Jericho Community Centre is run by Jericho Community Association and organizes a lot of activities for everyone: kids, teenagers, adults. It hosts many interesting classes related to art, yoga, dance. The Centre also provides rooms for different meetings and family parties. It is an ideal place for relaxing with family.
Image by vancouverfilmschoo l on Flickr under Creative Commons License.
8

You shouldn’t miss visiting the charming Anglo-Catholic St Barnabas Church which stands in the Jericho area of Oxford.

The church was founded by Thomas and Martha Combe, ardent followers of the Oxford movement. The building was designed by Sir Arthur Blomfield in the Romanesque Basilica style, closely modelled on San Clemente in Rome. The site, a low lying meadow on the banks of Oxford Canal, was donated by a city ironmonger, George Ward. The church was consecrated in 1869 by the Bishop of Oxford, Samuel Wilberforce.

The church’s Italianate campanile-style tower was built in two stages; the lower section was completed at the same time as the church, while the campanile was finished in 1872. Its original roof was a steep pyramidal spire with windows on each side, which was replaced in 1965 by the copper roof you will see today.

Inside, the church is very beautiful with wall panels in the eastern apse depicting Christ in Majesty above the 12 Apostles. On the other walls, panels feature the animals mentioned in the Book of Revelation, chapter 4.

The High Altar is higher than the nave and is reached by nine steps and has a delicately ornate gilded ciborium over it. The murals on the north wall of the nave represent Te Deum and are made of cut glass using the “opus sectile” technique.

The choir stalls are made of New Zealand pine, installed in 1870, while the intricately decorated Walnut pulpit was donated in 1887. On the stone capitals near the Baptistery you will notice the carved portraits of Sir Arthur, Bishop Wilberforce, the Reverend Alfred Hackman and Father Montague Noel, who were also connected with the church.

Small carved portraits of Thomas Combe and his dog Jessie can be seen on the opposing corners at the base of the pillar in the Lady Chapel.
Image by rtclauss on Flickr under Creative Commons License.

While in Oxford, you can take a break from visiting famous landmarks and go shopping. As the city is known for its University, it offers a big range of bookshops with rare and interesting books and publications. Amazing antiques, prints and maps shops, as well as art and music shops and many others open their doors for those, who want to be pleasantly surprised and buy nice things.

Museums and Galleries in Oxford

Oxford is a beautiful British city famous throughout the world for its University and historic places. The city offers a lot of activities and attractions. For example, Oxford is famous for its museums and galleries that are known for their unique collections and that host regular art exhibitions.
Take this tour to discover the history and culture of the city.