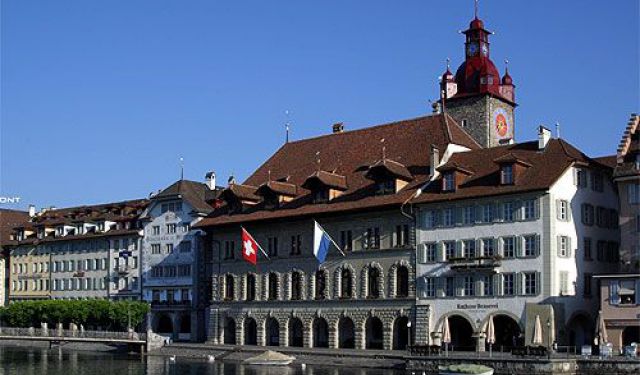 Image by Roland Zumbühl on Wikimedia under Creative Commons License.

Lucerne is an amazing city that sits on the side of Lake Lucerne and is surrounded by beautiful mountains. Sometimes known as "The City of Light", Lucerne is one of Switzerland's key cities. Its long and rich history has bestowed upon it lots of amazing architecture and fascinating stories. Take this walking tour to discover the real jewels of Lucerne.
How it works: Download the app "GPSmyCity: Walks in 1K+ Cities" from iTunes App Store or Google Play to your mobile phone or tablet. The app turns your mobile device into a personal tour guide and its built-in GPS navigation functions guide you from one tour stop to next. The app works offline, so no data plan is needed when traveling abroad.

The Chapel Bridge is a covered wooden footbridge spanning diagonally across the Reuss River in the city of Lucerne. Named after the nearby St. Peter's Chapel, the bridge is unique since it contains a number of interior paintings dating back to the 17th century, although many of them were destroyed along with most of the centuries-old bridge in a 1993 fire. Subsequently restored, the Kapellbrücke is the oldest wooden covered bridge in Europe, as well as the world's oldest surviving truss bridge. It serves as the city's symbol and as one of Switzerland's main tourist attractions.

The bridge itself was originally built in 1333 as part of Lucerne's fortifications. It linked the old town on the right bank of the Reuss to the new town on the left bank, securing the city from attack from the south (i.e. from the lake). The bridge initially had a length of over 200 metres (660 ft), although due to numerous shortenings throughout the years and river bank replenishments, the bridge now totals only 170 metres (560 ft) in length.

Why You Should Visit:
From the charming farmer's markets along the water's edge to the infamous swans floating across the water, this bridge is dreamy to say the least.
Along its both sides you'll find lush flowers pouring over the edges and artwork every few feet that dates back to the 1600s.

Tip:
Experience it at night also with the city lights, swans, flowers and vibrant atmosphere. Both banks are full of great shopping and fantastic restaurants.


Image by Andrew Bossi on Wikimedia under Creative Commons License.
Sight description based on wikipedia
2

The Rathaus was constructed in 1606 by Anton Isenmann. This town hall has a Renaissance architectural style, with an Emmentaler-style roof. Right above the arcades, you will find the Kornschütte hall, which used to be a major trading venue.

Why You Should Visit:
Part of the city's urban landscape and a beautiful sight as such, its tall clock tower dominating the right bank of Reuss river.
Fits perfectly into the Old Town architectural/historical ensemble, though it may not accessible on the inside.
Makes for a pretty good photo op and close to other attractions such as shops, restaurants and bars.
Image by thisisbossi on Flickr under Creative Commons License.
3

If you're a chocolate lover you won't want to come to Lucerne without visiting the Confectionary Bachman, a veritable "Land of Chocolate". Here you'll find an amazing variety of delicious products unique to the store that are produced with the best traditional methods and to the highest quality. Be sure to taste the Luzerner Chatzestreckerli (cherry-flavored chocolates with liquid truffle creme) as well as the famous Baileys truffles and many other kinds of bread, pastries, desserts and chocolates.
Image by norwichnuts on Flickr under Creative Commons License.
4

The Matthäuskirche is named after the evangelist Matthew, one of the twelve Apostles. The first Protestant church in the city, Matthäuskirche was designed by Ferdinand Stadler around 1860. It came about as a result of a search for a church site by the owner of the adjacent Hotel Schweizerhof. The church represents a fascinating example of Gothic renaissance style. Composer Richard Wagner, who lived in Lucerne from 1866 to 1872, married his second wife Cosima von Bulow here in 1870.
Image by Ikiwaner on Wikimedia under Creative Commons License.
5

The Hofstube is a historical Swiss-style restaurant located in the Hotel Zum Rebstock. This amazing restaurant famous for serving a large variety of German, French and Swiss dishes. Spread across two dining rooms, you're sure to have a charming evening of folklore-inspired dining.
Image by Maggie 1947 on Flickr under Creative Commons License.
6

If wood carving and handicrafts are your thing then this is a store you won't want to miss. Centrally located in the main shopping area near the Lion monument, it's the perfect place to find a special something that will always remind you of Lucerne. They've got a very wide assortment of original Swiss handicrafts including cuckoo clocks, dolls, bells, music boxes and the finest woodcarvings.
Image by www.schmocker-souvenirs.ch under Creative Commons License.
7

The Church of St. Leodegar is the most important church and a landmark in the city of Lucerne. It was built in parts from 1633 to 1639 on the foundation of the Roman basilica which had burnt in 1633. This church was one of the few built north of the Alps during the Thirty Years War and one of the largest and art history rich churches of the German late renaissance period. In 1874 the parish church of St. Leodegar was founded and with that, the church became simultaneously a monastery church and parish church, as it is today.

Why You Should Visit:
The views at the top are majestic overlooking the Old Town and Lake Lucerne.
Inside the church, the details are quite pretty and there are regular organ concerts.

This timber restaurant near the Lion Monument is one of the most popular attractions in the area. It's beautifully decorated in a 17th-century style with porcelain, antique glass, hand-carved oak doors, wooden stairways and antique silver. Be sure to try the Wiener Schnitzel, which have been a favorite of tourists for decades. In summer there's a great outdoor terrace too.
Image by Nobody's Clown on Flickr under Creative Commons License.

Due to Lucerne's long religious and cultural history, its architecture is one of the most popular for tourists in all of Switzerland. It boasts several remarkable bridges because of how the city is divided by the Reuss river. Your attention will also be struck by the magnificent churches and historic castles and towers. Take our walking tour to discover the most famous architectural sights in...  view more

Lucerne is packed with all kinds of great tourist attractions. And when you're done with all these spectacular sights, the city offers a wide range of options for a great night out. Take our tour to find the most well-known nightspots in Lucerne.