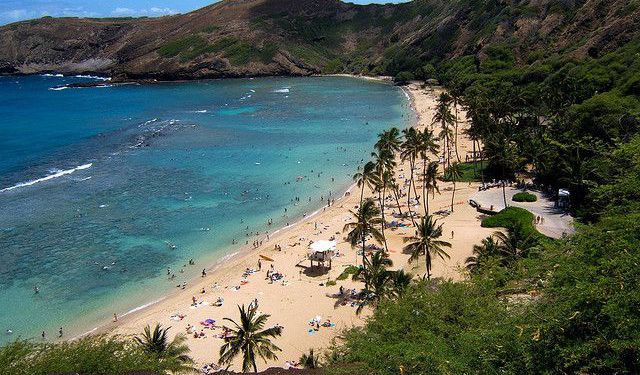 Image by D'Arcy Norman on Flickr under Creative Commons License.

The Hawaiian Kai region is especially attractive for two reasons: Koko Head Park and Hanauma Bay. Today, the entire area has been developed, but without harming the picturesque landscape. Here, you can rent a boat, take diving lessons, or simply take a walk. The self-guided tour through Kai is a perfect opportunity to escape the hustle and bustle of the capital city, so we encourage you to take it.
How it works: Download the app "GPSmyCity: Walks in 1K+ Cities" from iTunes App Store or Google Play to your mobile phone or tablet. The app turns your mobile device into a personal tour guide and its built-in GPS navigation functions guide you from one tour stop to next. The app works offline, so no data plan is needed when traveling abroad.

Rochelen Docks is a small area in the Kai region, that's less known to tourists. However, it's a nice place, full of boats and it has good access to water. The Docks are made up of several short streets that offer a great view of the Pacific Ocean. Besides walking around and admiring the amazing view, you can also rent a boat and sail for a while.
Image by mattk1979 on Flickr under Creative Commons License.
2

Oahu, and especially Honolulu, offers a lot of attractions, but one of the most popular is scuba diving. The city is full of diving companies, however this is one of the favorite places among tourists. The shop offers equipment for rent and also has a large variety of classes for beginners and pros alike. The staff have been described by visitors as "caring, attentive, professional and nice people".

Image by throughnothing on Flickr under Creative Commons License.
3

Hanauma Bay is a horseshoe-shaped bay located along the southern coast of Oahu. The bay itself is the product of a volcanic eruption; the formation of a low cone allowed for the bay's curved shape.

The name “Hanauma” is somewhat debated. The word “Hana” means bay. The “uma” portion of “Hanauma” may mean curved, or may come from the name of an old hand-wrestling game. In the past, the bay was used as a fishing and entertaining area by Hawaiian royalty. Archaeological findings suggest that Hanauma was used regularly by people, though the lack of a source of drinkable water means that it wasn't likely to have been the site of a permanent settlement. Because of the bay's shape, it was also used as a stopover point between the islands of Oahu and Molokai.

Today, Hanauma Bay functions as a nature preserve and conservation area. It is a nesting ground for green sea turtles, houses over 400 indigenous species of fish, and shelters a wide variety of coral. It also sees about 3000 visitors a day, which has resulted in some stringent measures to help protect the native flora and fauna in the area.

Why You Should Visit:
You pay a small entrance fee of $5 to have access to this gorgeous beach bay. Everything is well organized, too, including a video explaining proper beach etiquette. After this, you do a short walk down to the beach that is just absolutely scenic. It really feels like you have your own private beach! You can then rent your snorkel gear which you should absolutely do so you can explore all the green turtles and marine life that the coral reef has to offer.

Tip:
It may take a while to get comfortable using the snorkel gear and practicing how to breathe. If you think you will have major issues with this, consider bringing some kind of floaties or life vest so that you can swim further out into the ocean and really see the beauty that lies below you.


Image by skyseeker on Flickr under Creative Commons License.
Sight description based on wikipedia
4

Koko Head lies on the southern coast of Oahu. It exhibits several depressions as a result of volcanic activity tends of thousands of years ago. These depressions consist of volcanic tuff cones (a cone formed of solidified ash left after a volcanic eruption). One is Koko Crater, a large tuff cone with a height of 1208 feet, and the low depression responsible for the horseshoe shape of Hanauma Bay. Koko Head defines Maunalua Bay on its eastern side, and Koko Head Regional Park takes up much of the eastern end of Oahu.

The areas surrounding Koko Head are popular tourist destinations for visitors to Hawaii. Inside of Koko Crater there is Koko Crater Botanical Garden, and horse stables. This area was set aside for the growth and conservation of a wide variety of rare cacti, aloes, succulents, bougainvillea, and native plants. Nearby is Hanauma Bay, a horseshoe-shaped bay formed by another tuff cone that is currently used as a conservation site for green sea turtles and over 400 varieties of fish. Lastly, there's Sandy Beach, a popular spot for surfing, wind surfing, parasailing, and kite flying due to the area's intense trade winds.
Image by Jason Helle on Flickr under Creative Commons License.
Sight description based on wikipedia
5

Halona Beach Cove, or Halona Blowhole, is a part of the Koko Head Regional Park. This blowhole in situated on a rocky coastline. It's visited yearly by a huge number of tourists because it was the place, where the love scene between Burt Lancaster and Deborah Kerr was filmed, in the movie From Here to Eternity. The true force of the blowhole can be seen on windy days. It's then that the true force of nature is revealed.
Image by paulidin on Flickr under Creative Commons License.
6

Sandy Beach is situated between Hanauma Bay and Makapuʻu Point, on the east coastline of Oahu. It's a popular place for extreme water sports, like body-boarding or body-surfing. Due to the break in the shoreline and intense winds, this area is not suitable for family swimming. For those who like quiet activities we recommend kite flying, walking in the local park, or sun tanning.
Image by MattSims on Flickr under Creative Commons License.