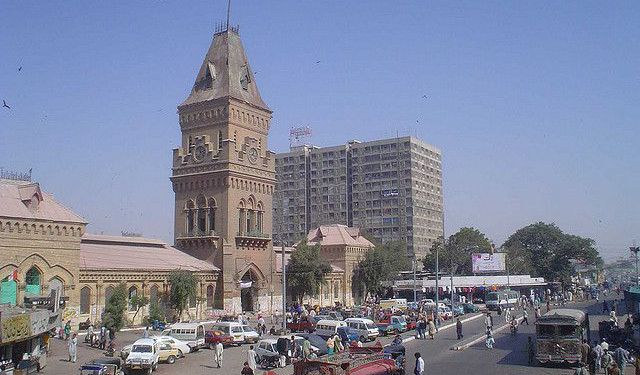 Image by greg_flickr on Flickr under Creative Commons License.

Karachi is a city with a very rich history and strong spirit. The buildings in this tour may be a little different from each other, yet each one silently describes a history of this great city. Furthermore, some of the buildings presented may be architecturally specific to other cultures and countries, but that doesn't mean they do not integrate well with Karachi.
How it works: Download the app "GPSmyCity: Walks in 1K+ Cities" from iTunes App Store or Google Play to your mobile phone or tablet. The app turns your mobile device into a personal tour guide and its built-in GPS navigation functions guide you from one tour stop to next. The app works offline, so no data plan is needed when traveling abroad.

Narayan Jagath Videanath (NJV) High School was built in 1852. The initiator of this grand institution was Sir Bartle Frere. Today, the school is considered a historical treasure due to its exceptional architectural style and sandy color of the walls.
Image by Heliøs on Flickr under Creative Commons License.
2

BVS is one of the oldest Parsi schools for boys in Karachi. Located near the electronic market on Abdullah Haroon Road, the school is still conducted in the original building that was constructed in 1857.
Image by Faraz.Husain on Flickr under Creative Commons License.
3

Jahangir Park is a very popular site for the locals, as it offers numerous attractions including a beautiful fountain named Bram Bah (built in 1893), a cricket ground, pavilion, and a little mosque in one of the park's corners.
Image by thejonoakley on Flickr under Creative Commons License.
4

St Andrew's Church is known as the Scottish church. It was built in 1868 by Presbyterian mission in IndoPak, the land acquired from British government. The church building is built in Gothic style with arches. It was used by foreigners till 1947, in 1969 Urdu services were started here by the Christians living in Saddar, today it is in affiliation with church of Pakistan for Prayer management manner.
Image by newsphoto90 on Flickr under Creative Commons License.
Sight description based on wikipedia
5

The Empress Market is a famous marketplace situated in the Saddar Town locality of Karachi. The market traces its origins to the British Raj era, when it was first constructed. Today, it is amongst the most popular and busy places for shopping in Karachi and reflects as one of the few historical spots of the city. Commodities sold in the Empress Market range from condiments, fruit, vegetables and meat to stationary material, textiles and pet shops. The Empress Market was constructed between 1884 and 1889 and was named to commemorate Queen Victoria, Empress of India. The building was arranged around a courtyard, 130 ft by 100 ft, with four galleries each 46 ft wide. The galleries provided accommodation for 280 shops and stall keepers; at the time of its construction it was one of only seven markets in Karachi.
Image by greg_flickr on Flickr under Creative Commons License.
Sight description based on wikipedia
6

St. Patrick’s Cathedral is the first church in Sindh (except for possibly one in Thatta), it was initially built on the grounds of this cathedral in 1845, and was called St. Patrick’s Church. On April 1881 the present cathedral was opened, since the Christian community grew in number, and the need for a larger place of worship became apparent. Despite the construction of the new building, the little church continued to function until it was destroyed by a storm in 1885.

The present-day cathedral is built in Gothic Revival architecture, also called indogothik; it measures 52 metres by 22 metres, and has the capacity to accommodate at least 1,500 worshipers at the same time. The Gazetteer of the Province of Sindh provides a description of the cathedral: "Its exterior is not ornamental, though striking from a distance, but money and art have been lavished on the interior. The chancel, itself spacious, acquires a special impressiveness but its additional height, while the noble contours of the aspiring altar are seen to the best advantage. The whole interior is painted in oil and the windows are all of stained glass, the members of the congregation."

Image by XalD on Wikimedia under Creative Commons License.
Sight description based on wikipedia
7

Ideal Life Assurance Building is a situated on Zaibunnisa Street. The building was constructed in the middle of the nineteenth century by the British Government. The architecture of the building is classic European style, decorated with a diverse range of details and tones.
Image by FeatheredTar on Flickr under Creative Commons License.
8

The Holy Trinity Cathedral in Karachi is a church built for the non-Islamic population. The cathedral is also admired for its wonderful architecture and frescoes. Developed in the British Raj style, some of the plaques inside the Cathedral demonstrate scenes of British soldiers throughout the various wars.
Image by newsphoto90 on Flickr under Creative Commons License.