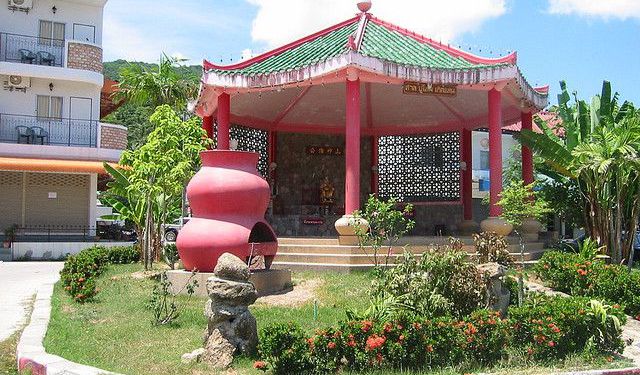 Image by Cambridge Cat on Flickr under Creative Commons License.

If you long for a quieter place during your holiday, then Karon will become your paradise in Phuket. Like every town located at the seashore, there are some interesting attractions there, including lots of bars and restaurants. The people are very friendly and love to make new acquaintances and friends. Take the following walking tour to discover the calmness of this place!
How it works: Download the app "GPSmyCity: Walks in 1K+ Cities" from iTunes App Store or Google Play to your mobile phone or tablet. The app turns your mobile device into a personal tour guide and its built-in GPS navigation functions guide you from one tour stop to next. The app works offline, so no data plan is needed when traveling abroad.

Many interesting little statues and monuments are here at Karon Beach. Most of them are dedicated to local working people, such as mining and agricultural laborers. One such statue is located at Nong Han Lake, in the northern part of the beach. It is a lovely small memorial made out of bronze. The statue represents a Thai manual worker, who appears to be very proud of his job. The man is dressed in national clothing, which is very simple but evocative.
Image by happysnappa1966 on Flickr under Creative Commons License.
2

The Nong Han Lake is the largest naturally formed lake in the northeast area of Thailand. It covers an area of approximately 125 square kilometers at an average depth of 1.9 meters. The water in this picturesque lake comes from the Nam Pung river whose origin lies south of the lake in the Phu Phan mountains. However, during the summer, the Lake tends to shrink a bit since the Huai Nam Khan takes the lake water to the Mekong, the world’s tenth largest river. The lake is primarily used for fishing but also serves as a tourist spot. One can reach this lake via the closest town, Sakon Nakhon. The lakeshore has now become a public park and can be good site for a family picnic or a peaceful day alone.

The Lake gets a festive uplift when a boat race is organized every year to mark the end of the period of Buddhist Lent. Unfortunately, the lake is infested with liver flukes which are human parasites and under no circumstances is swimming allowed in the Lake. The Phu Phan National Park is also located close by and offers some exciting walking trails perfectly complemented by two waterfalls. The Park is also an exciting place for the ornithologist in you.

Image by jsymmetry on Flickr under Creative Commons License.
3

One of the lesser known temples in the city of Phuket is the Wat Suwan Khiri Khet Temple. Dedicated to the Buddha, this modest little temple is the perfect place to get away from the crowded beaches and other cliché tourism of Phuket.

Located just a half a kilometer from the beach along the Patak Road, the Wat Suwan Khiri Ket Temple is the perfect hideout for a quiet meditation. Boasting a small yet beautiful structure with ornate Buddhist architecture, the Temple is a brilliant combination of Chinese and Buddhist designs.

On entering the temple you are greeted by two gigantean serpents or Nagas, whose bodies encircle the entire complex. The Temple maintains a beautiful garden which is open to visitors at all times. People come here to meditate, and enjoy the peaceful environment. The main entrance is guarded by two ferocious ‘yaks’, which guard the beautiful black sapphire Buddha along with Kali (Hindu goddess) adorned on a cow. The interior walls of the temple depict the life of Buddha, describing the events of his ten lives and his course to enlightenment. All in all, the Wat Suwan Khiri Khet Temple is a must visit in Phuket.

Naga is an important character in Thai mythology and traditions, represented by a large snake. Naga is a deity considered to be the protector of springs, wells and rivers. They bring rain and give fertility to the land. Usually Nagas are represented as a golden snake, as the one at Karon, but sometimes they widely differ in coloring. Four types of Nagas are part of local culture: dark Naga, guardian Naga, water Naga and spirit Naga. The one at the monument here is a guardian type. It is an interesting monument to see and is characteristic of the local culture and beliefs.
Image by find eric on Flickr under Creative Commons License.
5

Karon Beach refers to a beach, and the town adjoining it, on the western coast of Phuket. The beach is a popular destination for tourists. Generally quieter than neighbouring Patong Beach, it is especially popular among families and couples, and less popular with singles than Patong. It is also especially popular with Scandinavian tourists, with many businesses catering especially to them. Karon Beach was heavily damaged by the tsunamis following the 2004 Indian Ocean earthquake, especially in its southern regions, but has since largely recovered and by 2008 showed little evidence of tsunami damage. It has a tropical climate with a dry season from November to April and a rainy season from May to October.
Image by yeowatzup on Flickr under Creative Commons License.
Sight description based on wikipedia
6

Phuket is known for its many beaches and night life, as well as for the tourist spots like the temple and the old Phuket town. Dino Park offers a refreshing break from the usual sightseeing routine. Located on the Karon Beach, it is a thematic mini golf course set in the pre-historic world of the awe inspiring dinosaurs. There are numerous life-like replicas of dinosaurs complete with a 12m waterfall, a lava cave and erupting volcanoes. The Park can give any of the dinosaur movies a run for their money with a moving and roaring T-Rex. The whole scenario is complete with special light and sound effects.

The golf park has 18 holes, each of which blend smoothly into the theme. It can accommodate 60 people for a 40 minute round at a time. For those not as enthusiastic about mini golf, a walk through the park will provide many photograph worthy moments. After a round of mini golf, visitors can cool off at the restaurant/bar, which also follows the primeval jungle theme wonderfully.

The park is open between 10am and 11pm. The tickets cost 240 Baht for adults and 180 Baht for children. It makes for a unique experience that combines the sport with a foray into the past. It virtually guarantees some amazing times with friends and family, irrespective of their age!
Image by zhaffsky on Flickr under Creative Commons License.