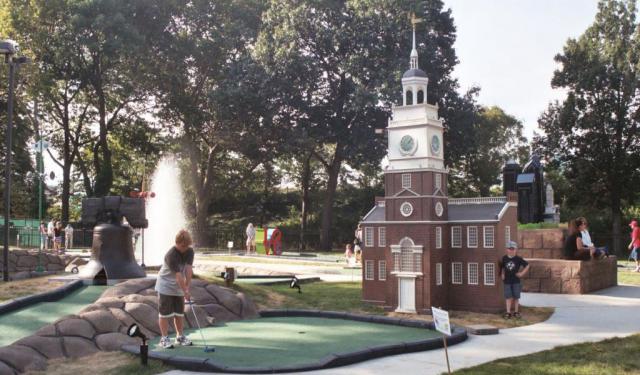 Image by Bruce Andersen on Wikimedia under Creative Commons License.

Philadelphia is one of the greatest family destinations in the United States. This wonderful city offers a diversity of interesting attractions for all ages. Its fabulous Arden Theatre Company, the African American Museum, the magnificent sweet shops on Market Street and the Independence Seaport Museum are amazing places for parents to enjoy with their kids. Check out these great attractions in this self-guided tour!
How it works: Download the app "GPSmyCity: Walks in 1K+ Cities" from iTunes App Store or Google Play to your mobile phone or tablet. The app turns your mobile device into a personal tour guide and its built-in GPS navigation functions guide you from one tour stop to next. The app works offline, so no data plan is needed when traveling abroad.

A renovated Franklin Square was unveiled in the summer of 2006 as part of Philadelphia's celebration of Benjamin Franklin's tercentenary. Courtesy of the project, the park—last of five original squares laid out by William Penn—obtained new walkways, lighting, landscaping, and public WCs with changing tables. Inside the Square is a number of attractions including the Philadelphia Park Liberty Carousel, Philly Mini Golf, and a couple of public playgrounds (one for kids aged 2 to 5, and the other for 5 to 12s). The square also houses a beautiful namesake (Franklin Square) Fountain and Once Upon A Nation's—a unique local attraction featuring storytelling benches, craft demonstrations, and merchandise kiosks.
Image by Bruce Andersen on Wikimedia under Creative Commons License.
2

Housed in an old firehouse that was operational between 1902-52, this unique museum was designed for the Bicentennial to showcase Philadelphia's rich firefighting history and the first organized volunteer fire company in Colonial America – the Union Fire Company – established by Benjamin Franklin in 1736. Another reminder that the Founding Father had a hand in everything!

The building still contains the original brass sliding pole used for quick access to fire trucks. Several other pieces of old equipment are on display, including an 1896 hook-and-ladder, a 1903 high-pressure Cannon Wagon, and a 1907 steam-powered pumper. Of special note are two well preserved hand-pumpers – one from 1815, and the other from 1730. Also on display are axes, saws, nozzles, old fire plaques indicating insured buildings, and leather fire hats from the early 19th century. A large stained-glass window memorializes fallen firefighters.


Image by Beyond My Ken on Wikimedia under Creative Commons License.
3

Arden Theatre Company runs the first in the city resident professional children's theatre program, featuring shows made with the same cast, designers, and budgets as those engaged in the main, adult productions. Each of the Children's Theatre performances is followed by an informative Q&A session, during which kids can ask the actors questions about their work. After the show kids can meet the actors one-to-one in the lobby. The theater is also home to Arden Kids' Crew, for kids aged between five and 11, and the Arden Teen Company, for teens in grades six to 12. Both of these include summer camp programs, one-day workshops, and classes in acting, design, and muscial theater, taught by some of the city's most experienced theater professionals.
Image by AMP on Wikimedia under Creative Commons License.
4

Brothers Ryan and Eric Berley come from a long line of antique dealers. When they decided to convert a former bakeshop of dubious taste into a stylish old-school ice cream parlor and soda fountain, no painstaking detail was spared. The ensued result justified the effort and saw an authentic early-20th-century style interior with vintage wooden cabinetry lining the walls and tin ceilings overhead, in which the signature hand-made Franklin Ice Cream is carefully dispensed over Tennessee pink marble counters. On offer are classic sundaes, splits, soda fountains favorites, fruit pies and other baked stuff, complete with rarities such as old-time chewing gum and America's first soft drink—Moxie cola.

Image by Aaron Logan on Wikimedia under Creative Commons License.
5

The Independence Seaport Museum is a museum dedicated to the maritime history of Philadelphia, Pennsylvania and the Delaware Valley. It is located in the Penn's Landing complex along the Delaware River in Philadelphia. The museum was founded in 1961 by J. Welles Henderson and has dozens of exhibits including the warship USS Olympia and the submarine USS Becuna. There are many maritime artifacts, ship models, and full-sized boats in the permanent and interactive exhibitions. The exhibits focus on the Port of Philadelphia, trade, immigration, shipbuilding, and deep sea submersibles.
Image by George100 on Wikimedia under Creative Commons License.
Sight description based on wikipedia

The sixth largest city in the U.S. and the birthplace of "life, liberty, and the pursuit of happiness", Philadelphia is a dynamic city heaped with old-world charm and contemporary infrastructure. This historical city was born in 1701 when Charles II of England granted William Penn, a famous Quaker, a charter for the Pennsylvania Colony. As soon as the area was settled, Penn made treaties...  view more