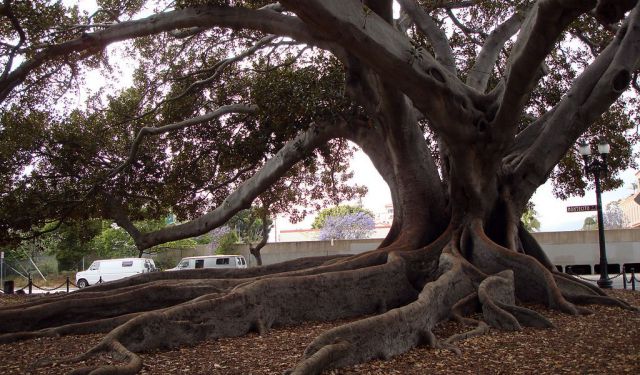 Image by enfad on Flickr under Creative Commons License.

Santa Barbara is a beautiful Californian City, with plenty of family-friendly attractions. In the American Riviera you’ll find plenty of museums, exhibitions, playgrounds and educational places where you and your children have the opportunity to spend some quality time together. In this walking tour you’ll find attractions for children of all ages, with interesting developing programs, and interesting places for all ages that exemplify the nature and history of Santa Barbara.
How it works: Download the app "GPSmyCity: Walks in 1K+ Cities" from iTunes App Store or Google Play to your mobile phone or tablet. The app turns your mobile device into a personal tour guide and its built-in GPS navigation functions guide you from one tour stop to next. The app works offline, so no data plan is needed when traveling abroad.

The Maritime Museum is located in Santa Barbara's harbor and contains interesting educational exhibitions laid out on nearly 8,000 square feet of museum space. It is a vital part of the community, providing both temporary and permanent exhibits. Exhibits include Survival at Sea, a sport fishing exhibit and some other entertainment for children.

There is a large variety of educational tours both for children and adults in order to familiarize the public with the maritime environment. Adult education covers topics such as celestial navigation, cruising skills for the Channel Islands, coastal navigation, and how to buy the best boat.

Image by dsearls on Flickr under Creative Commons License.
2

In the ‘’Living Beach’’ exhibit, visitors find an actual tide pool with waves rushing through it every 60 seconds. In the ‘’BioLab’’, visitors explore the life cycle of marine creatures, from eggs to larvae to juveniles and adults, as well as eggs and babies of sharks. The ‘’Wet Deck’’ opens to visitors the world of oceanography. A ‘’Moon Pool’’ (an open well in the floor allowing access to the water below) brings up samples of seawater, ocean floor sediment, and plankton. The ‘’Channel Theater’’ shows a video introducing the environs of the Santa Barbara Channel and the importance of this body of water for human communities. In the ‘’Submerged Science Lab’’, visitors further examine samples of seawater they have brought up from the ‘’Wet Deck’’ below and check it for its “vital signs.”
Image by Davefoc on Wikimedia under Creative Commons License.
Sight description based on wikipedia
3

Santa Barbara's Moreton Bay Fig Tree is believed to be the largest Ficus macrophylla in the country.

A seaman, visiting Santa Barbara in 1876, presented a seedling of an Australian Moreton Bay Fig tree to a local girl who planted it at 201 State Street. After the girl moved away a year later, her girlfriend, Adeline Crabb, transplanted the tree to the corner of Montecito and Chapala streets on land then owned by the Southern Pacific Transportation Company. The tree was officially designated as a historic landmark in 1970, and the property was deeded to the City of Santa Barbara in 1976. The tree has since been placed on the California Register of Big Trees.


Image by gailf548 on Wikimedia under Creative Commons License.
Sight description based on wikipedia
4

The courthouse is composed of four buildings, totaling 150,000 square feet (14,000 m2). It includes a Jail Wing, which is no longer used to hold prisoners. Visitors may take elevators to the summit of the 85 ft (26 m) "El Mirador" clock tower, which has labeled photographs that show what the viewer is looking at in all directions.

Occupying an entire city block, the grounds contain a collection of palms and specimen trees from more than 25 countries. The courthouse hosts many events, particularly at the Sunken Garden, site of the 1872 courthouse.

Kids World is a unique playground inspired by children's fantasies and wishes. There's a huge whale to sit on, cubbies to hide in, high wooden bridges to run across and towers on which to relax. From the top of the castle there is a splendid view of the surrounding oasis. Sit on the castle or on one of the bridges and you will be able to see everything and not lose your kids!
Image by Mark Stevens on Flickr under Creative Commons License.

Santa Barbara is a wonderful city in California that has been always attracting many tourists with its beautiful architecture, shopping opportunities and numerous sparkling nightspots. Cozy bars, cocktail lounges and explosive clubs offer everything you need to experience an unforgettable night out in Santa Barbara. Take this walking tour to check out the hottest clubs and bars of the city.