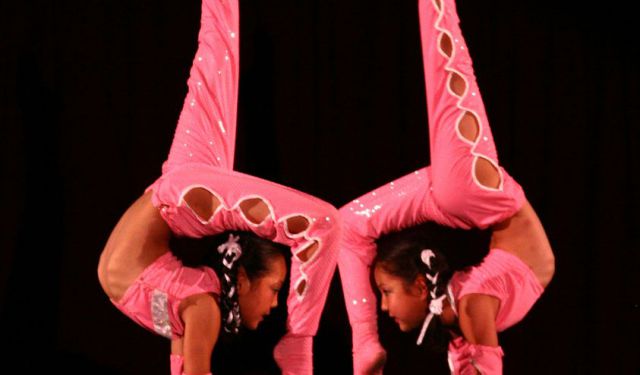 Image by hbp_pix on Flickr under Creative Commons License.

Riga offers plenty of attractions to capture the interest of your children. Visit parks with interesting statues and fountains, check out the city's fun museums and attend the Riga Circus. Enjoy the best attractions for children in Riga on this self-guided tour.
How it works: Download the app "GPSmyCity: Walks in 1K+ Cities" from iTunes App Store or Google Play to your mobile phone or tablet. The app turns your mobile device into a personal tour guide and its built-in GPS navigation functions guide you from one tour stop to next. The app works offline, so no data plan is needed when traveling abroad.

The Latvian Academy of Sciences (LAS) was established in 1946. For almost half a century it united research institutions and individual scientists of Latvia, which was then part of the Soviet Union. In 1992 the academy's status was changed and allowed it to operate as an association of scientists. Today, LAS’s main objectives include facilitating fundamental and applied studies, historical research and upholding the Latvian culture and language.

The academy's building is the first skyscraper in the country, standing 108 metres (354 ft) high. Until recently, it was the tallest building in Latvia, designed by architect Lev Rudnev in the so called “Stalinist” manner. Because of that and also for the building's multi-layered form, people have nicknamed it the Kremlin or Stalin’s Birthday Cake. Construction of the skyscraper started in 1953 and lasted until 1956. In the Soviet tradition, the building was considered a gift from the workers and peasants of other Soviet republics to the Latvian people.

Nowadays, it draws tourists like a magnet, even though some of the academicians don't quite welcome the attention. Visitors are allowed inside and can go up to the 17th floor to enjoy the panorama of Riga from the altitude of 65 metres (213 ft).

Image by Tournesol on Wikimedia under Creative Commons License.
2

The Museum of Nature in Riga boasts the oldest and most voluminous collection of natural exhibits in the Baltic region. The museum was founded as a private entity in 1845 by the Riga Naturalists Society, which was a German society aimed at preserving and displaying its natural collection to the people for the purpose of educating and involving them in environmental issues. This goal has stayed unchanged throughout the museum’s history and its new exhibits, added over the years, pursue the same objective.

The museum collections are spread over four levels, featuring a multitude of fossils, stuffed animals and plants. Those seeking zoological and geographical information about the region will find it here in abundance. The 175,000 exhibits are grouped into 6 categories, namely: Geology, Botany, Zoology & Entomology, Palaeontology & People, Anthropology, and Environment. Temporary exhibits are also periodically displayed in the museum.

Apart from the exhibition space, the museum embraces departments for Collection Management, Exhibition and Information, taxidermy and photographic laboratories and a library.

Image by Vadiroma on Flickr under Creative Commons License.
3

Riga Circus is the only permanent circus in the Baltic States. It was commissioned by Albert Salamonsky, a renowned circus performer and entrepreneur, in the late 1880s. The current building was designed by architect Yan Frindrich Baumanis, and features a rather innovative construction technology: the whole structure is made of rails, with 16 pillars providing support for the huge dome roof, and each pillar being made of three joined rails. The circus is sited between G. Merķeļa (formerly Big) and A. Kalniņaall (formerly Small) streets in Riga on the piece of land that was, at the time of its construction, considered unsuitable for industrial projects.

The circus building was unveiled on December 29th 1888, yet the history of circus on this site pre-dates the building. For several years, each summer Albert Salamonsky would bring to Riga his troupe - acrobats, dancers and clowns - and performed shows in a tent, put on the very same spot that he later acquired and built the circus, much to the delight of Riga’s citizens.

Today, Riga Circus runs an impressive programme featuring trained animals, tamed predators, jugglers, acrobats, jumpers and clowns. The regular season starts in October and lasts until April. In summer, performances are also held, but only on weekends. Inside the building, visitors can see pictures, highlighting the history of Riga Circus, and portraits of famous performers.
Image by hbp_pix on Flickr under Creative Commons License.
4

The Latvian State Puppet Theater was founded in 1944. Since 1954 it has held performances for adults, as well as kids. The first adult play, "Devil's Mill", was staged by Tina Hercberga. In recent years, a successful partnership with the St. Petersburg Theater director Alexander Mindļinu has resulted in several puppet shows for adults, including "Carmen. Female Version", "Who of us are entangled?" and more. There are also a variety of shows for kids.
Image by Aris Jansons on Flickr under Creative Commons License.
5

What to buy here: Latvian Sweets.

While taking a walk around Old Riga, you will notice many small shops offering chocolate desserts and confections. Latvians have always excelled at sugary pastries, honey cakes and , most importantly, chocolate, which will surprise one's taste buds with its rich flavor.

Riga's chocolate history dates back more than 100 years, having amassed a great number of traditional recipes. Among the products with the longest history is the chocolate candy "Serenade". These can be found under the "Laima" brand. It is the most famous confectionery brand in the Baltic, it has recently celebrated its 140th birthday. Its most famous candy, the "Serenade", dates back to 1937. It's composition comprises such ingredients as fruit jelly, apricots, nuts and the mysterious, but oh so craved "chocolate magic". Another sweet delight to bring back home are the Prozit boxes containing solid chocolate bottles filled with liqueur. The prices for Laima's products range from $5 to $7 per chocolate bar and around $9 to $15 for a chocolate box.

There is another option for those who crave a new, supple and exquisite taste. Venture into cafe "Emihls Gustavs Chocolate", the central cafe is situated adjacent to Hotel Reval. There, one will be served a deliciously fragrant coffee and the best chocolate in town. All chocolate confections at this cafe are handmade, created following Latvia's oldest recipes. No margarine, thickening agents or flavor enhancers here! Chocolate bars, candies and figurines can also be bought as gifts. These will be nicely warped in accurate packages and decorated with a delicate ribbon. Furthermore, the cafe organizes frequent workshops, where visitors can try their hands at painting the chocolate figurines.

Prices range from $9 and up.

Tour of Riga's Churches and Cathedrals