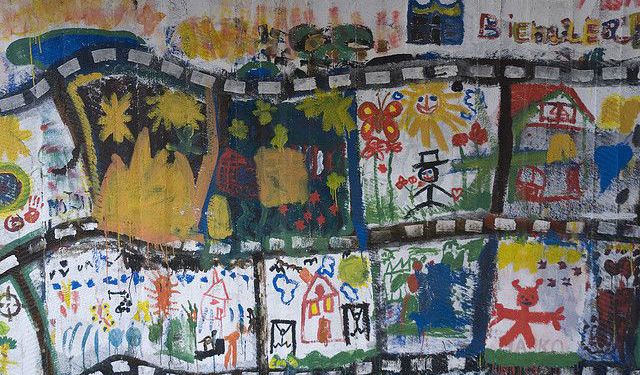 Image by thefunny42 on Flickr under Creative Commons License.

There are lots of interesting things to do in Bratislava for adults, teenagers and kids alike. The city offers every visitor a great variety of entertainment options -- from informative and educational on architecture and national history, to the simply funny and charming street sculptures. This guide presents the most unusual landmarks and facts about Bratislava that you and your kids may be pleased to discover.
How it works: Download the app "GPSmyCity: Walks in 1K+ Cities" from iTunes App Store or Google Play to your mobile phone or tablet. The app turns your mobile device into a personal tour guide and its built-in GPS navigation functions guide you from one tour stop to next. The app works offline, so no data plan is needed when traveling abroad.

If you travel with kids, you may wish to walk a little bit further and visit the Bibiana Gallery in Panska Street – the place fully dedicated to children’s learning and children-oriented art. First opened in 1987, the gallery provides a wide spectrum of programs, hands-on exhibits, displays of book illustrations, animations and more. What's unique about it is that there's no permanent collection of any sort. The gallery contains three main halls with the exhibitions changing every month. Two-thirds of the exhibits are interactive and allowed to be touched, felt and grabbed by young visitors. The gallery itself is not at all huge but still will suffice to keep your little rascals engaged for a few hours exploring and enjoying themselves. It is open Tuesday through Sunday and is highly recommended.
Image by Wizzard on Wikimedia under Creative Commons License.
2

Johann Pálffy Palace (Slovak: Pálffyho or Pálfiho Palác) is a late Classicism-style building in the Old Town of Bratislava, located on Panská Street, near Hviezdoslav Square. The palace stands on the site of a former building, which was until mid-1850s the seat of Pozsony county. After the seat moved elsewhere, it was rebuilt in a late Classicist style by the Pálffy family, who were the former hereditary chiefs of Pozsony county. Since reconstruction in the 1980s, the building has housed three permanent exhibitions of the Bratislava City Gallery along with some temporary exhibitions.
Image by Wizzard on Wikimedia under Creative Commons License.
Sight description based on wikipedia
3

Čumil Statue was created by sculptor Viktor Hulík, and located at the intersection of Panska and Rybarska Brana streets, not far from Main Square in the Old Town. This bronze statue doesn't portray any particular person. Rather, it is a fruit of the author's imagination; the Čumil fella seems to be enjoying himself fully during a work break, sticking his head out of the manhole reportedly out of passion to observe - from down under - the lovely young ladies passing by. Čumil's head is a constant lure for children who simply adore rubbing it and perching atop. On some occasions, the statue is said to have been damaged by or indeed damaged back the oncoming vehicles whose drivers didn't see where they go. Years in this place, Čumil has now earned himself a sign, reading “Man at Work”, which indeed he is posing daily for pictures of the numerous tourists coming to see him.
Image by Bojars on Wikimedia under Creative Commons License.
4

The city of Bratislava, Slovakia is not without its surprises. Guests to the city will enjoy searching for the many idiosyncratic statues which have been installed around the town. Schone Naci, or Beautiful Ignaz, represents life in the city at the turn of the century, 1900. The real Schone Naci was born in 1897. He was the son or a shoemaker. His eccentric spirit caused him to be memorialized. History says that he would stroll around, what is considered to be the Old Town Bratislava, near Michael’s Gate and the Danube River. His attire included a top hat and tails. When he came upon women, he would say “I kiss your hand” in languages including Slovak, German and Hungarian. The bronze statue, which is located on Rybarska brana Street, greets people just as the real Schone Naci once did. Even though he was a man without financial resources of his own, it is said that he walked the streets of Bratislava dressed as if he were very wealthy for over 40 years. Tourists to the city can spend an entire day, strolling and exploring the streets of this beautiful city, searching for the many wonderful bronze pieces which have been strategically placed for the public to enjoy.
Image by Colin Cameron on Wikimedia under Creative Commons License.
5

The Café Maximilian also known as a chocolaterie, as it offers you one of the most delicious dishes and sweets in all of Bratislava. Here, in the nonsmoking area, you and your kids may enjoy the sight of Main Square while sipping the amazingly delicious hot chocolate. The place's menu of delicate coffee is just as amazing.
Image by Frances Ellen Pe-Aguirre on Flickr under Creative Commons License.
6

The city of Bratislava, Slovakia is filled with unique bronze statues which pop out from the public areas to surprise the masses. Tourists on holiday to the city will want to plan some relaxing time exploring the metropolis and seeking out these fabulous little surprises. The statue of Napoleon’s Army Soldier is located on the main square leaning over a park bench. Visitors enjoy spending time having their pictures taken with the statue. In fact, this is one of the most popular photographic moments in Bratislava. The sculptor, Juraj Meliš, created a figure to commemorate the two occasions when Napoleon’s army entered the city during the 1800s. The statue earned its name because of its pose. His crossed arms and French Napoleonic hat are reminiscent of Napoleon himself. Some of the other figures, which can be found around the city, are Cumil, Paparazzi and Schone Naci. These whimsical bronze statues are a result of a collaboration among local sculptors who were asked by the town government to add features which would help the city move away from its once austere and communistic appearance. After the first couple statues were installed, more followed, due to their popularity with the locals and tourists.
Image by UnorthodoxY on Flickr under Creative Commons License.
7

Located in the Burgher’s House, which is a Baroque structure situated adjacent to the moat at St. Michael’s Gate, the Museum of Pharmacy houses a collection which includes close to 9,000 pharmaceutical artifacts and 3,000 volumes of pharmaceutical publications. The Bratislava building has gone through several reconstructions throughout its history, causing it to have a combination of various architectural styles in its design. The stone entrance reflects Rococo style while the facade is representative of Classicist style. The museum first opened its doors to the public in 1953. The museum displays a replication of the original “Red Crayfish” pharmacy which once operated inside this structure. Displays include a wide variety of pharmaceutical equipment which dates back to the 16th century, along with furniture and medicinal vessels. The original cast iron sign, which hung over the “Red Crayfish” can still be seen upon arrival at the building. While the museum reflects a time period from the 16th century to the present day, the room is filled with exquisite Baroque paintings on its walls and the vaulted ceiling, that all have a healing theme. The exhibition hall is open all year round.

Image by Bonnie Lee on Flickr under Creative Commons License.