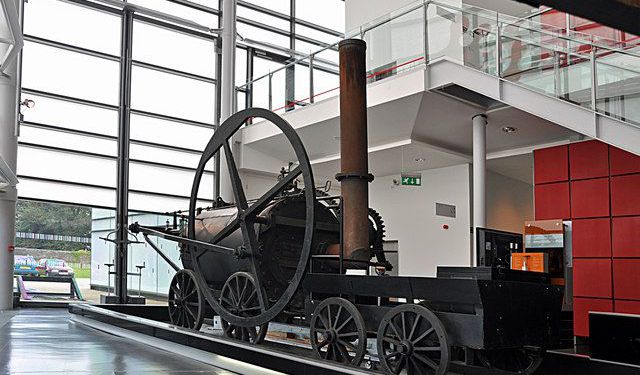 Image by Mick Lobb on Wikimedia under Creative Commons License.

The coastal city of Swansea is quite a welcoming place with numerous activities for your little adventurers. Amazing toy stores, theatres and hothouses with incredible wild life, are just a few must-see spots. Take this tour to tag along with your child, strengthen your family bonds and maybe even go back to being a child too.
How it works: Download the app "GPSmyCity: Walks in 1K+ Cities" from iTunes App Store or Google Play to your mobile phone or tablet. The app turns your mobile device into a personal tour guide and its built-in GPS navigation functions guide you from one tour stop to next. The app works offline, so no data plan is needed when traveling abroad.

The Plantasia is a large public hothouse located in the Parc Tawe retail park. It exhibits a wide range of tropical plants and insects. It opened in 1990.

The glasshouse contains three climate zones: Tropical with a rainforest, Arid and a seasonal Humid Butterfly House. The collection includes over 5,000 plants, many of which are extinct from their natural habitat. Plant types include bananas, coconuts, giant bamboo, Paw paw and collections of ferns and cacti.

Along with the plants, there is supporting insect life including ants, fish and reptiles. In the butterfly house, butterflies can be seen flying freely and viewed at various stages of development.

Plantasia has been used as a filming location for Doctor Who episodes "The Doctor's Daughter" and "Cold Blood".


Image by City and County of Swansea on Flickr under Creative Commons License.
Sight description based on wikipedia
2

Every Saturday and Sunday, fill your morning cup with energy and take your children to Odeon Kids! Only at this very cinema, screenings are especially selected for children. The price? Well, pocket money should be enough, because at Odeon, one child ticket gets you an extra adult ticket for free!
Image by manuel | MC on Flickr under Creative Commons License.
3

Swansea Castle was founded by Henry de Beaumont in 1106 as the caput of the lordship of Gower.

The original castle seems to have been a sub-rectangular/oval enclosure overlooking the River Tawe on the east, surrounded on the north, west and south sides by a larger sub-rectangular outer bailey.

After various unsuccessful attacks the castle fell in 1217 but was restored to the English in 1220 as part of the settlement between Llywelyn ap Iorwerth and Henry III of England. Immediately after this the inner castle was probably walled in stone with at least one tower.

Later in the 13th century the large outer bailey was also walled. The only visible remains are two sides of a rectangular "new castle" built in the South East corner of the outer bailey in the late 13th or early 14th century.

In the 18th and 19th centuries parts of the castle were variously used as a market, a town hall, a drill hall and a prison.

Part of the interior of the new castle was demolished early in the 20th century in the construction of a newspaper office. The remains have now been consolidated and opened up to view from the street.

Game Workshop is quite a unique shop; it gathers children and adults, but mostly boys who have the same hobby, which is collecting models of soldiers. The shop sells figures, hobby books, paint sets, tools and brushes, so that one can actually create his own army, paint the miniatures and modify them. You can come and paint some models right in the shop, where all of your questions will be answered by the helpful and friendly staff.

Originally Swansea Leisure Centre, the rebranded facility re-opened to the public on 1 March 2008. Its location, size and heritage all define its status as one of the most immediately identifiable buildings in Swansea. Opened by the Queen during her silver jubilee celebrations in 1977, the original Swansea Leisure Centre featured modern and groundbreaking facilities, such as the first wave machine to be installed in a leisure centre in Wales. It became one of Wales' top leisure facilities and a substantial tourist attraction.

At its peak it attracted more than 800,000 users annually. Swansea Leisure Centre closed in 2003 which resulted in the loss of a major wet weather visitor attraction and a major facility in which families and people of all ages could enjoy a range of recreational activities. Following a review of the options, the Council decided that the refurbishment of the Leisure Centre was the most effective option and works soon progressed in developing the former site into a 21st Century leisure complex.

The centre was officially reopened by Queen Elizabeth II on 7 March 2008. This was the second time The Queen had officially opened the building, the first time being more than 30 years ago when it was known as Swansea Leisure Centre.

The National Waterfront Museum or NWMS is a museum forming part of the National Museum Wales. It is an Anchor Point of ERIH, The European Route of Industrial Heritage.

Consisting of a major new slate and glass building integrated with an existing Grade II listed warehouse (formerly the Swansea Industrial and Maritime Museum), the new museum deals with Wales' history of industrial revolution and innovation by combining significant historical artifacts with modern technologies, such as interactive touchscreens and multimedia presentation systems. Building and exhibition design was carried out by Wilkinson Eyre and Land Design Studio respectively, and Davis Langdon was project manager for the construction.

Much effort has been put into accessibility for the new museum, and is one of the first museums in the United Kingdom to feature multilingual voiceovers, as well as British Sign Language captioning on all interactive content.

The museum, which secured funding from the Welsh Development Agency and the Heritage Lottery Fund (among others) was opened in October 2005.

The collections on display include maritime, transport, technology and retail artefacts.