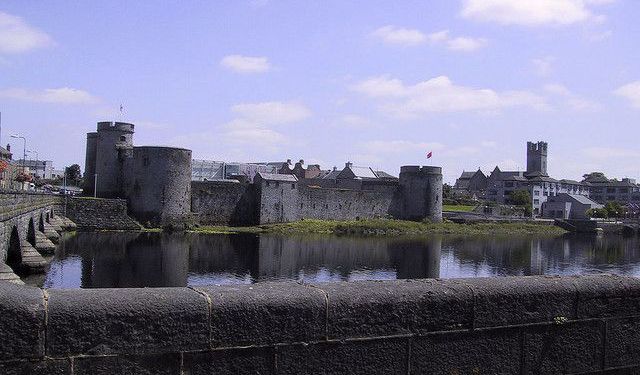 Image by hober on Flickr under Creative Commons License.

Limerick is a historic Irish city with lots of interesting tourist attractions to be seen. One of its most famous areas is King’s Island, where visitors can see amazing medieval castles, modern buildings, beautiful churches and fascinating museums. Take our King’s Island Tour to see all the top attractions of this part of the city.
How it works: Download the app "GPSmyCity: Walks in 1K+ Cities" from iTunes App Store or Google Play to your mobile phone or tablet. The app turns your mobile device into a personal tour guide and its built-in GPS navigation functions guide you from one tour stop to next. The app works offline, so no data plan is needed when traveling abroad.

The Treaty of Limerick ended both the Siege of Limerick and the war between the Jacobites and the supporters of William of Orange. The treaty protected the rights of the defeated Jacobite landed gentry who chose to remain in Ireland, most of whom were Catholics. This irregular block of limestone, which once served as a mounting block for horses, was where the agreement was signed in October 1691. To this day, Limerick is still sometimes referred to as the Treaty City.
Image by Seabhcan on Wikimedia under Creative Commons License.
Sight description based on wikipedia
2

The earliest bridge, Thomond Bridge, was built near a fording point. It was the scene of a failed defending of the city during the Siege of Limerick. At one ends sits the Treaty Stone, upon which the Treaty of Limerick is said to have been signed. The current bridge was built in 1836, replacing the earlier bridge which was also alongside King John's Castle. The bridge now forms part of the R445 (formerly N7), carrying traffic on the Northern Relief Road.
Image by wordjunky on Flickr under Creative Commons License.
Sight description based on wikipedia
4

The Island Theatre Company is an unusual Limerick landmark. Erected in 1827, the building served as a church for more than a century. After falling into disrepair, it was renovated in 1980 and transformed into a dancing studio and theatre venue. This limestone Gothic building with its high square tower echoes the St. Mary Cathedral in appearance and architectural detail. Next to the site you can visit an old graveyard.
Image by rford764 on Flickr under Creative Commons License.
6

Image by Rambling Traveler on Flickr under Creative Commons License.
Sight description based on wikipedia
7

Today the Cathedral is still used for its original purpose as a place of worship and prayer for the people of Limerick. It is open to public 6 days a week and on Sunday for worship and visitors are most welcome.
Image by martinroell on Flickr under Creative Commons License.
Sight description based on wikipedia
9

The Baals Bridge is a beautiful single-arch bridge that dates from 1831. There previously stood another bridge here that had four arches and even contained houses within its structure. At the time of its reconstruction, an old brass square from 1507 was found at the Baals Bridge. Its inscription states: “I will strive to live with Love and Care Upon the Level By the Square.”
Image by paul-simpson.org on Flickr under Creative Commons License.

Limerick is one of Ireland's main tourist destinations, located just a 15-minute drive from Shannon Airport. Tourism is growing at a spectacular rate in this region. The city is the first to provide visitors with 'Street Ambassadors' that help tourists make their stay more enjoyable and help them out. Take this orientation walk to visit the most popular attractions of Limerick.