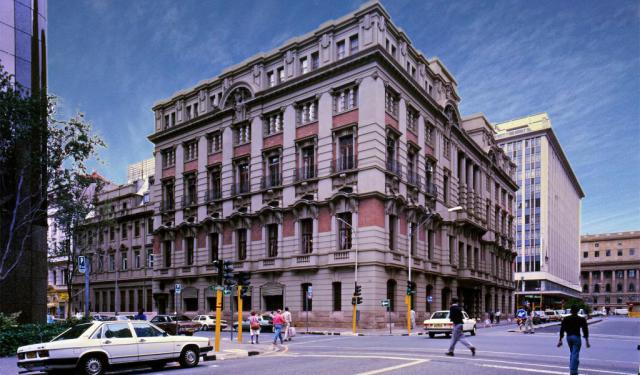 In recent years many of Johannesburg’s old buildings have been the subject of renovations, preserving them as national monuments. Some of the structures are still utilized and some have become tourists sites, attracting visitors to the city. The city’s landmarks include towers, cemeteries, a fort, the Gandhi Square and the old post office. Take this tour to discover the most well-known landmarks in Johannesburg.
How it works: Download the app "GPSmyCity: Walks in 1K+ Cities" from iTunes App Store or Google Play to your mobile phone or tablet. The app turns your mobile device into a personal tour guide and its built-in GPS navigation functions guide you from one tour stop to next. The app works offline, so no data plan is needed when traveling abroad.

Gandhi Square (formerly Van Der Bijl Square and Government Square) is a plaza located in the Central Business District of Johannesburg. It is named after the political activist and pacifist, Mahatma Gandhi. In 1900 on what was then called Government Square near the Court House, on 31 May Field Marshal Roberts accepted the surrender of the city from Z.A.R. Commandant, Dr. F.E.T. Krause. Judge Krause had been put in command of the city and had earlier prevented the dynamiting of the goldmines. The British allowed them a day to evacuate Johannesburg provided they did not set off the mines. The square is just off Rissik Street and it was a corner of Rissik and Andeerson that Mohandes Gandhi once had his legal offices. Today there is a life size statue of Gandhi in the square.
Image by Piercarlo_Romanò <pierkama@gmail.com> under Creative Commons License.
2

Johannesburg Stock Exchange Building is is an impressive glass building constructed after the economic boom the city experienced since the discovery of gold. The current business of the stock exchange has been moved to another building, but this important historic landmark remains a popular tourist attraction.
Image by Andres de Wet on Wikimedia under Creative Commons License.
3

The Nelson Mandela Bridge links the city’s two main business areas – Newtown (the CBD) and Braamfontein. An elegant suspension bridge, it is 284 metres in length and opened in 2003. Unlike many major road bridges, it does not cross a river or lake. Johannesburg is one of the largest cities in the world not to have been built on a river, lake or coastline. It instead crosses forty-two railway lines, as they converge, leading into the main railway station. Since the bridge opened, it has greatly improved traffic connections in this expanding, disparate metropolis.

A bridge, linking the two areas, was first suggested by town planners in 1993, as part of the city centre’s regeneration plan. Developers Steve Thorne and Gordon Gibson suggested the bridge be named after Nelson Mandela, who at that time was uniting the nation through his election campaign. Whilst the project was shelved for many years, the name has remained.

The bridge was designed by Dissing & Weitling, and is built from concrete and steel. A road and pedestrian bridge, it was renovated prior to the 2010 World Cup, when new lights were installed. The new lights, alternate through the colour spectrum, created one of the city’s most attractive landmarks once the sun goes down.

Image by austinevan on Flickr under Creative Commons License.
4

Dedicated to those who died in the explosion at Braamfontein station, this cemetery is the final resting place of many of South Africa’s most famous figures as well as a number of soldiers who fought for the country over the years. It contains both Jewish and Muslim burial grounds.
Image by Sdnxumalo on Wikimedia under Creative Commons License.
5

The Origins Centre's exhibits take visitors on a journey of discovery, which begins with the origins of humankind in Africa. It then moves through the development of art, symbolism and technology on the continent. The second phase of the Museum focuses on the fossils discovered in South Africa and the contribution that these fossils have made to understanding the development of humankind. The journey then continues, showing the destruction of the diverse southern African rock art traditions – the world’s oldest continuous art forms, before ending with the rediscovery of these ancient masterworks in a contemporary world. A host of fascinating multimedia displays are available as well as audio guides in six different languages.

Why You Should Visit:
To learn something unique to the region. Exceptionally interesting and not to be found anywhere else.
Staff is friendly and there is a nice variety of curiosities and books to purchase at the shop.

Tip:
Good for teenagers but not ideal for small children.

Image by MisterMatt on Wikimedia under Creative Commons License.
6

Brixton Cemetery is a place of rest for those who gave their lives in the First World War. There is a monument to these brave soldiers as well as one commemorating the South African Scottish Regiment.
Image by Steamhunter on Wikimedia under Creative Commons License.
7

The Sentech Tower is located in the western suburb of Brixton. At 778 feet tall, it is around 100 feet shorter than the Telkom Jo’Burg tower to the north, but is ten years older. The two towers are both visible all across this sprawling city, and are used for navigation by Johannesburg residents each day. The Sentech Tower, now named after an internet service provider, was designed by Ove, Arup and Partners. It was originally named after radio pioneer Albert Hertzog. It began transmitting radio and TV frequencies in 1961, and currently broadcasts 7 television stations and up to 18 FM radio channels.

Johannesburg is known for its stormy, unpredictable weather, with lightning and high winds particularly prevalent. The tower was built to withstand winds of up to 120 miles per hour, and can lean by as much as six feet in any direction in gale force conditions. This is due to the tower’s concrete cantilevered structure. The tower is closed to the public, although a viewing platform in the tower was accessible until 1982. It is hoped that, as part of the regeneration of the city centre and inner city suburbs, the tower may soon be opened up to visitors once again.
Image by rebamex on Flickr under Creative Commons License.