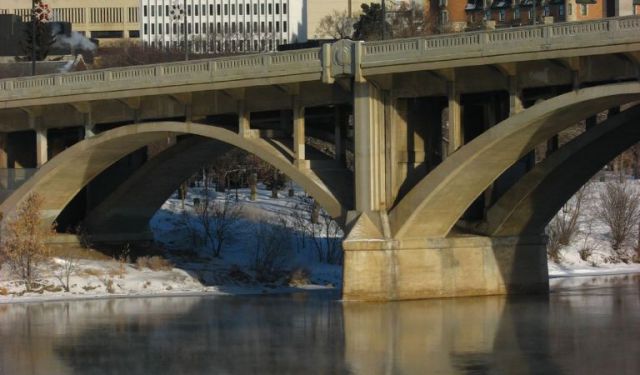 Image by Michael Scheltgen on Flickr under Creative Commons License.

Saskatoon is a unique city in Canada that has outstanding buildings and wonderful views due to its history and to the ongoing wish of preserving it for future generations. Take this tour to see the most incredible landmarks Saskatoon has to present.
How it works: Download the app "GPSmyCity: Walks in 1K+ Cities" from iTunes App Store or Google Play to your mobile phone or tablet. The app turns your mobile device into a personal tour guide and its built-in GPS navigation functions guide you from one tour stop to next. The app works offline, so no data plan is needed when traveling abroad.

Vimy Memorial is located in Kiwanis Park near the famous Delta Bessborough Hotel. The memorial was established in 1937 in honour of the country’s involvement during the First World War in the Battle of Vimy Bridge, which was of significant importance as well as major consequence for Canada. The other monument is also called the Canadian National Vimy Memorial and it is located in Pas-de-Calais, France.
Image by waferboard on Flickr under Creative Commons License.
2

Broadway Bridge is an arch bridge that spans across the east and west banks of the South Saskatchewan River in Saskatoon.

The bridge was constructed as a "make-work" project during the Great Depression. It was built in 1932 by the contractor R.J. Arrand Construction Co. It was designed by Chalmers Jack (C. J.) MacKenzie (on leave from being Dean of Engineering at the University of Saskatchewan). For this reason, the bridge was originally called the Dean's Bridge in its early period; it was formally named the Broadway Bridge as it connects Broadway Avenue on the east shore with 19th Street and 4th Avenue in Saskatoon's downtown core. The city once considered changing the name to George V Bridge in honour of the King.

The year-long closure of the nearby Traffic Bridge in late 2005 greatly increased the amount of daily traffic crossing the bridge. The image of the Bessborough Hotel framed within one of the arches of the Broadway Bridge is considered one of Saskatoon's iconic images.

Image by zemistor on Flickr under Creative Commons License.
Sight description based on wikipedia
3

The Rotary Park & Peace Prayer Pole Monument is located near the Broadway Bridge and is a public place. People use to come here, as it was a perfect area for sunbathing. There is also a tennis court and a landslide. The landslide was created in 1999 as a consequence of the water drain. The Peace & Prayer Pole Monument was created by Doug Bentham and there is an inscription on it: “May Peace Prevail on Earth” which is written in Cree, English, French and Japanese.
Image by daryl_mitchell on Flickr under Creative Commons License.
4

The Broadway Theatre is an art film and performance theatre located on Broadway Avenue in the Nutana neighborhood of Saskatoon. The theatre is Canada's only community-owned non-profit reperatory cinema. The Streamline Moderne style movie theatre was designed by George Forrester with the architectural firm of Webster and Gilbert and opened on December 5, 1946. The theatre was Broadway's entertainment destination during the post-World War II years.

The Bottomley House is a two-storey house established in 1912. It is an architectural structure in the Queen Anne Revival style. It is mostly made of wood with several windows and an unusual-shpaed verandah covering a corner of the house. The house was owned initially by Richard Bottomely, from where it got its name, but later bought by Richard Kerr. The structure didn’t change the original design, and as it is located close to the Memorial Gates of the University of Saskatchewan, it became more important as a landmark.
Image by Drm310 on Wikimedia under Creative Commons License.
6

The Memorial Gates are the main gates of the University of Saskatchewan. Initially they were designed as the main gates to the University but because of the large number of vehicles passing through that zone, it was decided that the entrance would be closer to the Royal University Hospital. The gates were established in 1927 as a memorial in honour of those who left this institution and died during the Great War.
Image by SriMesh on Wikimedia under Creative Commons License.
7

Rugby Chapel is a municipal historic site which is part of the University of Saskatchewan. Built in 1912 with funds raised by the students in Rugby School in England, it served as the major place of worship for Emmanuel College, until the opening of St. Chad's Chapel in 1966, and still serves as a place of education and worship. A wooden version of an English Stone-built church, the chapel has a wooden vault support structure, gothic windows and a Norman tower over the porch. Rugby Chapel is a symbol of the importance of the Anglican Church and the British people in the early development of the West and of the contribution made by Emmanuel College (now the College of Emmanuel and St. Chad) to theological education in Western Canada.

Griffiths Stadium was expanded in August and September 2011, adding 1,174 seats. Funding for the new seats will be provided by University of Saskatchewan Alumni David Dube and his wife Heather Ryan. Ten rows of seats were added to the east side stands between the 30 yard lines. These seats are premium seats which are wider, have more leg room, featuring armrests and cup holders. These seats are modeled after stadium seats in NFL stadiums.

Tour of Architectural Sights of Saskatoon