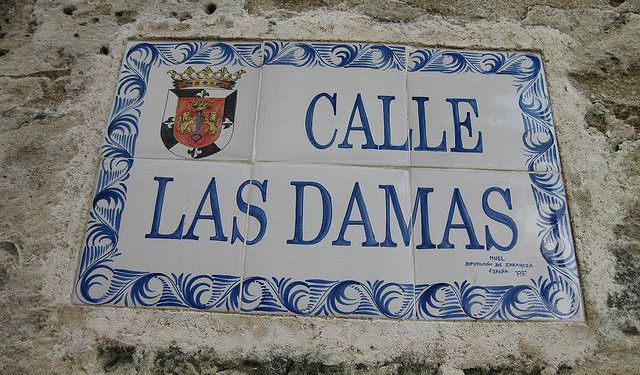 Las Damas is the most ancient street in the city and thus very popular due to its rich culture. The street received its name after the wives of important individuals in Dominican Republic who liked to take walks down the street in their spare time. Today you can follow their path and enjoy the same trees, colonial houses, and other buildings of interest.
Image Courtesy of Flickr and puroticorico.
How it works: Download the app "GPSmyCity: Walks in 1K+ Cities" from iTunes App Store or Google Play to your mobile phone or tablet. The app turns your mobile device into a personal tour guide and its built-in GPS navigation functions guide you from one tour stop to next. The app works offline, so no data plan is needed when traveling abroad.

Iglesia and Convento de Santa Clara was first a convent for postulates, but later became a church. The design of the building was very simple, until Don Rodrigo Pimentel modified the structure in 1648. Nuns, for several centuries, have had an intimate relationship with Iglesia and Convento de Santa Clara.
Image Courtesy of Flickr and Bludgeoner86.
2

The Fortaleza Ozama (in Spanish; Ozama Fortress in English) is a sixteenth-century castle which lies at the entrance to Santo Domingo, Dominican Republic and overlooking the Ozama River. Named after this river, the castle, also referred to as "La Fortaleza" or "The Fortress", is the oldest formal military construction still standing in America. An impressive architectural structure of medieval style and design, the Tower of Homage (in Spanish: Torre del Homenaje) stands in the center of the grounds. The castle was designed to guard the entrance to the port of Santo Domingo, and defend the city from seaborne enemies. Construction began in 1502. It was well-built enough to serve as a prison until the 1960s, when the prison was closed, the "Fortaleza" was restored and it opened to the public as a tourist attraction. It is located at the end of Las Damas Street.
Image Courtesy of Flickr and Ulises Jorge.
Sight description based on Wikipedia.
3

If you have little children than you should definitely visit The Children’s Museum, or in Spanish "Museo Infantil Trampolín". Several rooms are of interest inside the museum, including one with a big screen movie centered around the solar system. Also, kids can see what it's like to be in the middle of an earthquake, courtesy of the earthquake simulator.

This is the house of Don Rodrigo de Bastidas, governor of Santo Domingo. The building is not incredibly luxurious, as it looks more like a warehouse and is not necessarily convenient for living. The home was built to serve as a place where the Crown revenues and fortunes were kept before they were transfered to Spain. Upon entering the building, one will discover a big plaque of Santa Barbara from the 18th century. Art galleries are also located inside.
Image Courtesy of Flickr and tkksummers.
5

Construction on the governor's residence was completed around 1502. Former governor Nicolas Ovando personally designed it. The building has since been modified, yet was able to maintain its classic beauty. If you visit the home, make sure you venture out to the beautiful patio where you can witness the famous Ozama River.
Image Courtesy of Flickr and puroticorico.
6

The National Pantheon was built from 1714-1746 by the Spaniard Geronimo Quezada y Garçon and was originally a Jesuit church. The structure was constructed in the neoclassic-renaissance style. Today the structure stands as a national symbol of the Dominican Republic and serves as the final resting place of the Republic's most honored citizens.

Jesuits held mass here from 1746-1767. After 1767 it was used as a tobacco warehouse and then as a theater. The theater was the venue for the pro-independence organization La Trinitaria, which staged shows under aliases such as La Filantrópica and La Dramática. From its stages, the ideas were set in motion for a free and sovereign republic by national heroes like Juan Pablo Duarte, Ramon Matias Mella, and Francisco del Rosario Sanchez, among others.

In 1956, Spanish architect Javier Borroso renovated the structure to serve its new purpose as a national mausoleum, by order of then dictator Rafael Trujillo. Originally, Trujillo envisioned being interred at the National Pantheon, yet ironically today it is the place were the country's most famous persons are honored, among others Trujillo's assassins. Other notables that are buried at the National Pantheon include: Francisco Gregorio Billini, Gregorio Luperón, and Eugenio Hostos.


Image Courtesy of Flickr and puroticorico.
Sight description based on Wikipedia.
7

The chapel was built by Francisco Davila (also buried here), who had a lot of money. The chapel was a home for his relatives and the inside reflects that of a very rich owner. Outside, tourists will note a bell tower, created with stones.
Image Courtesy of Flickr and puroticorico.
8

Plaza España is a very beautiful plaza without any traffic, perfect for a stroll during the morning or afternoon. Along with the terrific shops, cafés, and restaurants, visitors may also be fortunate enough to catch a live show. Last but not least, the plaza is also famous for the Alcazar de Colon.
Image Courtesy of Flickr and puroticorico.