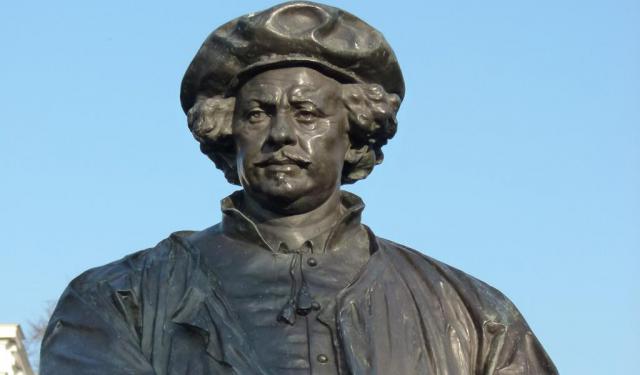 Image by Javier Lastras on Flickr under Creative Commons License.

The city of Leiden is a very old city that dates back to the 4th century, when one of its first fortresses was built by the Romans. Through history, Leiden had a lot of struggles and sieges. It has always been a remarkable city in every field. As proof, we shall guide you to the most important, unusual, amazing and large museums that Leiden offers. Nature, science, art and history - all these domains are shown in theme-based museums, visited by thousands of people every year.
How it works: Download the app "GPSmyCity: Walks in 1K+ Cities" from iTunes App Store or Google Play to your mobile phone or tablet. The app turns your mobile device into a personal tour guide and its built-in GPS navigation functions guide you from one tour stop to next. The app works offline, so no data plan is needed when traveling abroad.

The American Pilgrim Museum is a museum dedicated to the religious Pilgrims, who migrated to this territory in the middle of the 16th century. These were Puritan refugees who had fled England, continuing their lives in Leiden for about 12 years. The goal of the museum is to present "the reality behind the Pilgrim myth". Basically this is the interior of a home, recreated from old pictures and belongings. There is also a large display of 16th and 17th Century World Maps that are entirely hand-made by known carthographers. This museum is part of a net of museums dedicated to Pilgrims; the sister museum is located in Massachusetts, USA.
Image by Herenld on Wikimedia under Creative Commons License.
2

The Academisch Historisch Museum (Academy Museum of History) hosts a collection of early, historical Dutch documents, maps, photographs, old books and scientific reports dating from the 16th century until the present day. The edifice that was erected at the beginning of the 16th century also contains ethnology materials, like clothes, household objects, some art pieces and former uniforms of the Dutch army.
Image by Enrique Boira Freire on Wikimedia under Creative Commons License.
3

The Rijksmuseum van Oudheden (English: National Museum of Antiquities) is the national archaeological museum of the Netherlands. The Museum grew out of the collection of Leiden University and still closely co-operates with its Faculty of Archaeology. The museum calls itself the national center for archeology, and focuses on ancient Egypt, the ancient Near East, the classical world of Greece, Etruria and Rome and the early (prehistoric, Roman and Medieval) Netherlands.

The collection of the Rijksmuseum van Oudheden began with an inheritance in 1743. After the death of Gerard van Papenbroek, a member of the city elite in Amsterdam, an alderman and a burgomaster of the city, his collection was bequeathed to Leiden University. The bequest comprised about 150 antiquities and was published in 1746 by a professor of the university. It was put on public display, but poorly taken care of until half a century later it would finally get an official curator. This curator was classicist dr. Caspar Reuvens, the world's first archeology professor. Along with his duties as a professor at the university came the care of the archaeological cabinet, then consisting mainly of the Papenbroek inheritance.

Image by Goodness Shamrock on Wikimedia under Creative Commons License.
Sight description based on wikipedia
4

Sieboldhuis represents the nucleus of the Scientific Museum of Leiden. Its great collection contains ancient Japanese arts, as well as scientific and medical materials. Philipp Franz Bathasar von Siebold (1796-1866) was the person that researched and gathered materials and created this wonderful museum. The exhibit shows objects from daily life, arts and masterpieces and unknown handmade beauties: jewelry, vases, cups, plates, figurines of humans and animals, all hand-painted. The clothes room is also an interesting spot - unusual shapes and colours dance all around the spectators.
Image by Niels on Wikimedia under Creative Commons License.
5

Museum Boerhaave is a museum of the history of science and medicine, based in Leiden. The museum hosts a collection of historical scientific instruments from all disciplines, but mainly from medicine, physics, and astronomy. The museum is located in a building that was originally a convent in central Leiden. It includes a reconstructed traditional anatomical theatre. It also has many galleries that include the apparatus with which Heike Kamerlingh Onnes first liquefied helium (in Leiden), the electromagnet equipment used by Wander Johannes de Haas (a Leiden physicist) for his low-temperature research, and an example of the Leiden jar, among many other objects in the extensive collection.

The museum is named after Herman Boerhaave, a Dutch physician and botanist who was famous in Europe for his teaching at Leiden and lived to a great age, receiving brilliant students from all over Europe, including Peter the Great, Voltaire and Linnaeus.

Image by Jvhertum on Wikimedia under Creative Commons License.
Sight description based on wikipedia
6

National Museum of Ethnology is the first museum in Europe which was designed to demonstrate the collection of artifacts of man. Today the museum contains a large number of objects from Africa, but mostly from Asian countries, Latin America, North America and Oceania. The primary idea of the museum creators was acquiring material which illustrates the historical development of world cultures. The hot spots we suggest: Blomhoff collection, Fischer collection and Siebold collection. Things gathered here don't depict lifestyle alone, but interesting things used in medicine, science, arts and daily life. An extraordinary travel in time and space.
Image by Goodness Shamrock on Wikimedia under Creative Commons License.

Create Your Own Walk in Leiden

Creating your own self-guided walk in Leiden is easy and fun. Choose the city attractions that you want to see and a walk route map will be created just for you. You can even set your hotel as the start point of the walk.

Most of the people who go for a vacation abroad are families, usually with children. Of course, this tour is also great for young playful couples or couples who just miss their early years. Those who have kids - watch out! This is going to be a hot day; you will be exploring and learning, playing and eating tasty meals with your young travelers!

When it comes to secrets and exceptionally beautiful places, the Dutch city of Leiden is second to none. Some of the local streets haven't change much of their appearance and character for centuries. When in Leiden, watch your steps as you might follow, quite literally, in the footsteps of great Rembrandt himself. This orientation walk is set to reveal to you some of the local secrets and the...  view more

Even from the first glance it is clear - Leiden is the city of nice buildings, glorious edifices and wonderful architecture. To help you see the best of the best, we created this particular guide. It will lead you to old and modern buildings, dedicated to social service, science and religion. The places are of true interest for the whole family with any work specialty or hobby.