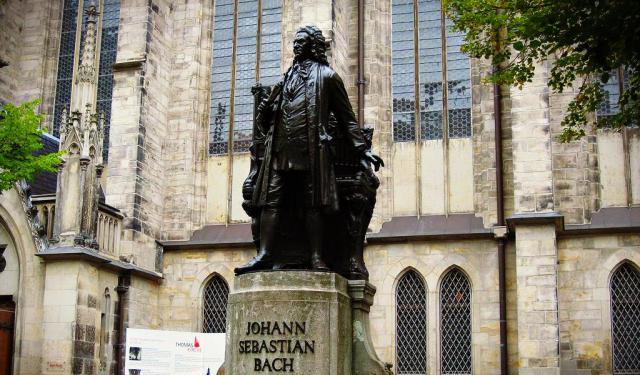 Those who enjoy exciting places will find plenty of attractions to their liking in the center of Leipzig, such as Brühl and Augustusplatz, where great bargains can be found. Take the following tour to discover the loveliest sites in this part of town.
Image Courtesy of Wikimedia and Zacke82.
How it works: Download the app "GPSmyCity: Walks in 1K+ Cities" from iTunes App Store or Google Play to your mobile phone or tablet. The app turns your mobile device into a personal tour guide and its built-in GPS navigation functions guide you from one tour stop to next. The app works offline, so no data plan is needed when traveling abroad.

Leipzig Hauptbahnhof, at 83,460 square meters, is Europe's largest station and one of Germany's finest railway terminals. It has 24 platforms housed in six trainsheds, a multi-level concourse with towering stone arches and a 293 meter long facade. It sees an average of 150,000 passengers per day, with over 54 million people using Hauptbahnhof each year. Opened in 1915 as a joint terminal for the Saxon State Railways and the Prussian State Railways, it is uniquely designed with two identical domed entrance halls facing the street, one for each company.
Image Courtesy of Flickr and vxla.
Sight description based on Wikipedia.
2

The Brühl is a street in Leipzig just within the limits of the former city wall. On the corner of the Brühl and Katharinestrasse stands the Romanus house, built for the mayor of Leipzig between 1701 and 1704, and one of the finest baroque buildings remaining in the town. In the late 18th century and early 19th century, the Brühl was part of the Jewish quarter of the city. The Brühl retained Jewish connections into the 20th century. The street was the centre of the World fur trade.

In 1938, under the Nazi government, 'the entire Brühl district changed hands, as fur firms — the pinnacle of Jewish commerce in the city, along with the department stores — were stolen from their owners. Today the street contains a few 19th-century and early 20th-century buildings, most of the remaining buildings being from the third quarter of the 20th century. A notable modern building is the town's Museum der Bildenden Künste (Museum of the visual arts).

Image Courtesy of Wikimedia and Appaloosa.
Sight description based on Wikipedia.
3

The Museum der Bildenden Künste is a museum of fine arts in Leipzig. On 7,000 square meters of display area, 3,500 paintings, 1,000 sculptures and 60,000 graphical works are shown. It covers artworks from the Late Middle Ages to Modernity. The museum dates back to the founding of the "Leipzig Art Association" by Leipzig art collectors and promoters in 1837, and had set itself the goal of creating an art museum. On 10 December 1848, the association was able to open the "Städtische Museum" in the first public school on the Moritzbastei. There were issued approximately hundred gathered and donated works of (at that time) contemporary art.

In 1937 the Nazis confiscated 394 paintings and prints mainly of Expressionism in the propaganda campaign Degenerate art. In the night of 4 December 1943, the building was destroyed by a British air raid. Much of the inventory had previously been brought to safety. By the mid-1990s, the city decided to give the museum back their own building. On 4 December 2004, exactly 61 years after the destruction of the "Städtische Museum" on Augustusplatz, opened the new museum at the former Sachsenplatz.

Image Courtesy of Flickr and artinberlin.
Sight description based on Wikipedia.
4

Built from 1678 to 1687, Alte Handelsbörse was originally a meeting place for Leipzig merchants to conduct business. Now it is used for chamber concerts. This beautiful two story Renaissance building with Baroque elements is Leipzig's earliest Baroque edifice and the first public building in the town. Located on Naschmarkt square, a statue of Goethe, the famous German writer and poet, stands in front of it.
Image Courtesy of Wikimedia and Zacke82.
5

Auerbachs Keller, the best known and second oldest restaurant in Leipzig, is mentioned in Goethe's play, Faust, as the first place Mephistopheles takes Faust on their travels. This wine bar was first mentioned in an historical record from 1438. The restaurant owes much of its fame to Goethe, who frequented Auerbach's Cellar as a student and called it his favorite wine bar. According to legend, alchemist Dr. Johann Georg Faust once rode a wine barrel from the cellar to the street at Auerbach's Cellar, something he could have accomplished only with the help of the devil. This legend is most likely what led Goethe to add the scene in his play.
Image Courtesy of Wikimedia and Morn the Gorn.
Sight description based on Wikipedia.
6

Städtisches Kaufhaus, designed by Rayher, Korber and Müller, was constructed from 1894 to 1901. This piece of land and architectural monument reflects 500 years of Leipzig's history of inner city trading and culture. It assimilates Baroque elements in the municipal library. As Leipzig's Trade Fair Site was newly constructed near the airport, Städtisches Kaufhaus nowadays is home to offices, retail outlets and restaurants. In addition to reconstruction, an underground parking garage and an underground event venue have been built.
Image Courtesy of Flickr and randwill.
Sight description based on Wikipedia.
7

The University of Leipzig is one of the oldest universities in Europe and the second oldest in Germany. It has a long tradition of globally oriented, culturally comparative historical research and tertiary-level teaching. Founded on December 2, 1409 by Frederick I, Elector of Saxony and his brother William II, Margrave of Meissen, it was originally made up of four faculties. In 2009 it celebrated its 600th anniversary, hosting over 300 scientific and cultural lectures and exhibitions. The university is ranked 5th in Germany, 29th in Europe and among the best two hundred in the world by the web-based Webometrics Ranking of World Universities.
Image Courtesy of Wikimedia and JesterWr.
Sight description based on Wikipedia.
8

Augustusplatz, a square located at the east end of the city center, began construction in 1785 as Platz vor dem Grimmaischen Thor, designed by city architect Johann Carl Friedrich Dauthe. Renamed Augustusplatz in 1839 after Frederick Augustus, the first king of Saxony, it is the city's largest square and one of the largest in the country. Prior to its bombing in the Second World War, it was one of Germany's most beautiful squares. It is also a central hub for the tram network.
Image Courtesy of Wikimedia and Oliver Storch.
Sight description based on Wikipedia.