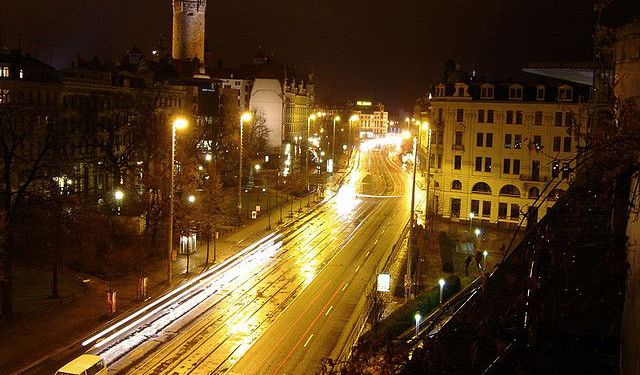 Image by Jonas Witt on Flickr under Creative Commons License.

Although Leipzig is known for its association with classical music, this does not mean that it is a sleepy town. It has one of Europe’s most dynamic nightlife scenes, where you can party, enjoy amazing cocktails and great music. Take this tour to explore Leipzig's best nightclubs.
How it works: Download the app "GPSmyCity: Walks in 1K+ Cities" from iTunes App Store or Google Play to your mobile phone or tablet. The app turns your mobile device into a personal tour guide and its built-in GPS navigation functions guide you from one tour stop to next. The app works offline, so no data plan is needed when traveling abroad.

Zum Kakadu, on Roßplatz, is Leipzig’s most popular karaoke club. Besides karaoke they also feature parties and great music to dance to. Enjoy singing, dancing, a terrific atmosphere and an endless party at Zum Kakadu.
Image by Rob Walker on Flickr under Creative Commons License.
2

The Moritzbastei is the only remaining part of the ancient town fortifications of Leipzig. Today it is widely known as a cultural centre. The Moritzbastei was built as a bastion in between 1551-1554 under the supervision of the mayor Hieronymus Lotter, who was also responsible for Leipzig's Altes Rathaus (old town hall) which is one of the most important Renaissance buildings in Germany. After being stormed for the first time in the Thirty Years War, the Moritzbastei lost its military function in the Seven Years War. Henceforth it served as a store for trade goods and workplace for a bell founder and a book printer.

In the period 1796-1834, the first public school was built over the basement of the Moritzbastei. It was the first school in Germany without confessional segregated classes and was destroyed in 1943 during World War II. From 1974 the Moritzbastei was rebuilt under the supervision of the University of Leipzig. More than 30,000 students were engaged in the reconstruction of the bastion, among them the recent Chancellor of Germany, Angela Merkel. From 1982 onwards the Moritzbastei was the official students club of the University of Leipzig.

Image by GothEric on Flickr under Creative Commons License.
Sight description based on wikipedia
3

The Mephisto Bar, opened in 1989, is famous for its feature drink, the Mephisto Feuer. During the daytime you can enjoy specialty coffees and during the evening have extravagant cocktails, as well as an extensive menu offered at all times. The red interior décor is true to its devil theme.
Image by Pot Noodle on Flickr under Creative Commons License.
4

The Spizz Jazz and Music Club is always full of life and is considered one of Leipzig’s hottest spots. It has the city’s best view of the Old Town Hall, an extensive bar and a dance floor. Downstairs you can find live jazz, blues or soul music. A student club, entrance and prices are reasonable, with occasional free entrance for ladies.
Image by Elisabeth D'Orcy on Flickr under Creative Commons License.
5

Café Luise, one of Leipzig’s most beautiful and pleasant cafés, features good music, a wide variety of drinks and excellent food. Its interior design is eye-catching, especially the lovely wine rack. For guests who stay all Friday night, a breakfast buffet is offered on Saturday morning. This trendy bar is definitely worth a visit.
Image by jenniedo on Flickr under Creative Commons License.