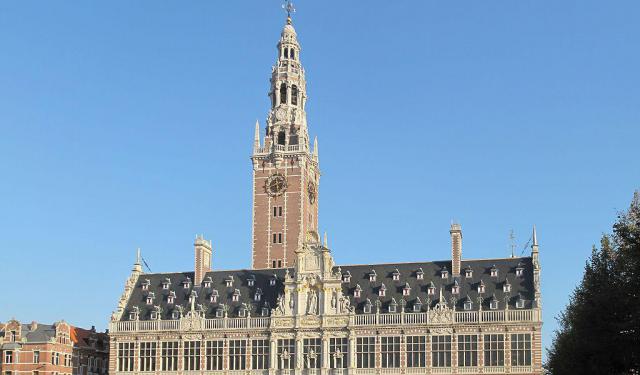 Leuven has some wonderful cultural attractions to offer, and is definitely most famous to beer lovers as the beer capital of Belgium or perhaps even the whole world. There is a large number of cultural buildings in this city and each attraction has its own special setup and outstanding collections on display. Take this walking tour to explore the best exhibitions in Leuven.
Image Courtesy of Wikimedia and Michielverbeek.
How it works: Download the app "GPSmyCity: Walks in 1K+ Cities" from iTunes App Store or Google Play to your mobile phone or tablet. The app turns your mobile device into a personal tour guide and its built-in GPS navigation functions guide you from one tour stop to next. The app works offline, so no data plan is needed when traveling abroad.

Located in the midst of various university buildings, the STUK centre is the old university hall and this is clearly displayed through big metal letters along the street. Designed by architects Riedijk and Rotterdam, the building is constructed around a large patio on which different chambers can be seen: a cinema, a nice café, auditoriums, offices and an art factory. On these grounds, great artists, tourists and passers-by meet and a new world can be found behind each door. STUK is now a house with many inviting rooms and it offers an amazing selection of plays throughout the year.
Image Courtesy of Wikimedia and Olybrius.
2

Established in 2009, the “M” Museum is essentially the history of the city museum. The beautiful building, located in the centre of the city, is a real eye-catcher. Designed by the architect Beel, the complex integrates existing historical buildings with contemporary architecture. It houses a brilliant collection of documents, artifacts, costumes and paintings that are presented to local people and visitors. Here you can find an original collection of Gothic sculptures and 19th-century paintings by various artists. From the roof of the museum, you have a splendid view of the city.
Image Courtesy of Wikimedia and Ritipitie.
4

Originally built between 1936 and 1942, the building of the library was designed by the well-known Belgian architect Henry van de Velde and it is the building of the former Technical School. In 1990 the school was protected as a cultural and historical building. Between 1994 and 2000 the construction was substituted by a public library and municipal archive office. The old playground of the school is now a municipal meeting place.
Image Courtesy of Flickr and Erf-goed.be.
5

This venue is one of the best places to head if you are looking for a relaxing evening out in the heart of the city. This movie theatre has 7 screens, all of which are beautifully decorated and have modern facilities. All movies are presented in their original language, subtitled in Dutch and mostly French as well. Only cartoons are shown in Dutch for the children, but can be also shown in the original language; so check out which one you want before buying your ticket. There is sure to be something to suit you at this nice-looking movie theatre.
Image Courtesy of Flickr and vredeseilanden.