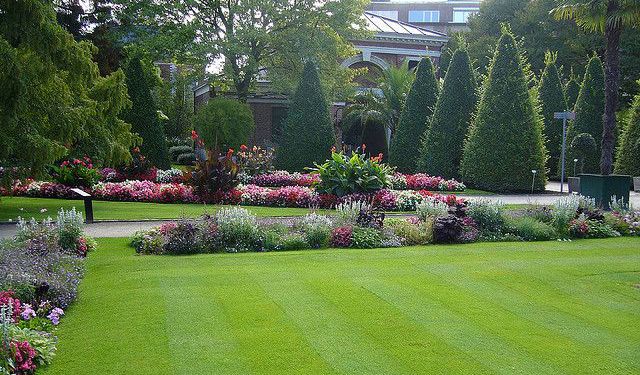 Image by Coy! on Flickr under Creative Commons License.

In terms of culture, entertainment and beautiful places to visit, Leuven has a wide range of possibilities. From its culinary walks to the dazzling green parks, from the student atmosphere in the main squares to the magnificence of the theaters, Leuven has it all. Take this wonderful tour to discover all the exciting places Leuven has to offer.
How it works: Download the app "GPSmyCity: Walks in 1K+ Cities" from iTunes App Store or Google Play to your mobile phone or tablet. The app turns your mobile device into a personal tour guide and its built-in GPS navigation functions guide you from one tour stop to next. The app works offline, so no data plan is needed when traveling abroad.

This park is not the biggest in the town, but it is a wonderful atmosphere in which to escape from the problems of modern life. Well wooded around the borders and with some impressive lawns and beautiful plants and flowers, the park is a very famous spot in the summertime. It is well loved and looked after by the people in surrounding housing areas.
Image by fvanrenterghem on Flickr under Creative Commons License.
2

This cinema is one of few in the heart of the city that embrace the love for film in this country. Offering a good-looking and well decorated atmosphere, the venue has an eclectic range of films in its program throughout the week. These range from the mainstream Hollywood productions to lower budget European and art house films.
Image by Metro Centric on Flickr under Creative Commons License.
3

This park is centrally located and comprises one of the many green estates in the heart of Leuven. Deliberately designed to be a place that had many green barriers between the manmade structures, the town enjoys a nice selection of park land. This park offers a lovely place of relaxation, and is famous with both local people and visitors to the area.
Image by Gary Breyssem on Flickr under Creative Commons License.
4

Created by master Paul van Aerschot, the hall is one of the most important auditoriums of the university. Established in 1989, the statue of Pieter de Somer was sculpted in front of the building. Pieter de Somer, who was named the first rector of the Flemish-speaking University of the city in 1968, was designed by Vic Gentils. Besides the didactic function, the auditorium serves also for major cultural, scientific and festive events at Leuven University.
Image by v.i.n.c.e.n.t. on Flickr under Creative Commons License.
5

The Great market Square is the most famous square anywhere in the city. The fine looking area is surrounded by some of the best buildings and facades, and offers a great introduction to the city. There are various cafes and restaurants around the vicinity where you can soak up some of the traditional atmosphere of the city. Lined with cafes from front to back, Oude Markt square is the main nightlife scene in Leuven, but it's busy during the day as well, especially when the weather is nice.
Image by Snowdog on Wikimedia under Creative Commons License.
6

Situated on the right side of the University Library, the monument was sculpted by Danny Tulkens and can be visited on the Hooverplein since 1988. The Friendship Balloon statue is dedicated to friendship and was offered by a group of men, apparently members of an organization named "Men of the Year".
Image by Lukas Koster on Flickr under Creative Commons License.
7

The Grote Markt of Leuven is situated between the Oude Markt and the Fochplein and near both the Bondgenotenlaan (Avenue of the Allied Forces) and the Muntstraat (Mint Street). Its location on the crossing of some of Leuven's most famous and most touristic spots makes the Grote Markt one of the city's busiest squares. However, it has been pedestrian-friendly for some years; only public transportation buses from De Lijn are allowed to use the square.

This location is one of the oldest and most historic in all of Leuven. The square has existed in its present form since the 14th Century, when the Catholic University Leuven was established. Most of the square's buildings are built in the Gothic style, of which the town hall is a prime example. Other buildings on the Grote Markt are the Church of St. Peter and several guild houses. As throughout Leuven, there are also many pubs, taverns, and eateries on the Grote Markt. There is a significant contrast between the more formal and traditional style establishments on the Grote Markt and the more trendy, youth-oriented and student entertainment spots on the nearby Oude Markt.

Image by mararie on Wikimedia under Creative Commons License.
Sight description based on wikipedia
8

Theatre has been an important part of the lives of people in this city since civilization began, and they are very proud of their history. This city is a cultural centre and includes numerous fine theatres, including this venue which offers good quality entertainment all year round. There is an eclectic selection of performances available from the excellent casts.
Image by Homeros 29 on Wikimedia under Creative Commons License.