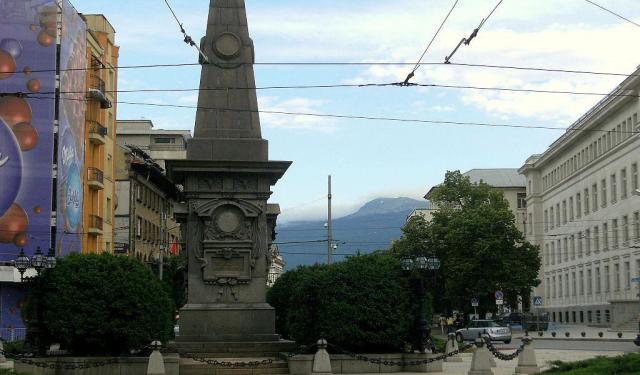 Image by Mark Ahsmann on Wikimedia under Creative Commons License.

Levski Boulevard is the main street of Sofia, and is notable for its many landmarks and monuments. The street took its name from Vasil Levski, a national hero in Bulgaria. Take our tour to explore the top sights of Levski Boulevard.
How it works: Download the app "GPSmyCity: Walks in 1K+ Cities" from iTunes App Store or Google Play to your mobile phone or tablet. The app turns your mobile device into a personal tour guide and its built-in GPS navigation functions guide you from one tour stop to next. The app works offline, so no data plan is needed when traveling abroad.

The National Palace of Culture, located in Sofia, is the largest multifunctional congress, conference, convention and exhibition centre in Southeastern Europe. It was opened in 1981.

The idea for the construction of this true contemporary castle comes from the former Bulgarian first-lady Lyudmila Zhivkova. The project was worked out by a team of Bulgarian and foreign architects, lead by Alexander Barov. The landscaping of Bulgaria Square in front of the National Palace of Culture was made by another team of architects and landscape engineers, lead by Atanas Agura. In July 2005, the National Palace of Culture was proclaimed the best congress centre in the world for the year by the International Organization of Congress Centres.

The congress centre has a wide variety of technical equipment at its disposal in order to host different types of events, such as concerts, conferences, exhibitions and shows. It has an area of 123,000 m² on eight floors and three underground levels. The National Palace of Culture has 13 halls and 15,000 m² of exhibition area, a trade centre and a car park. Sofia Film Fest, an annual film festival held in the capital of Bulgaria, Sofia takes place in NDK.

Image by Apostoloff on Wikimedia under Creative Commons License.
Sight description based on wikipedia
2

Patriarch Evtimiy Square, more popularly known as Popa, is a small urban square and a busy intersection in the centre of Sofia. The square was named after Evtimiy of Tarnovo, Patriarch of Bulgaria from 1375 to 1393 and one of the most important figures of medieval Bulgaria; a monument to Evtimiy by sculptor Marko Markov has adorned the square since 1939.

Patriarch Evtimiy Square is located at the crossing of the car-free Graf Ignatiev Street, Vasil Levski Boulevard and Patriarch Evtimiy Boulevard, which branches off Vasil Levski at the square. Due to its central location, between Sofia University and Orlov most to the east and the National Palace of Culture to the west, it is a very popular meeting point, particularly for teenagers and young adults. The square is well connected to many parts of Sofia through the nearby tramway, trolleybus and bus stops; many routed taxicabs of the marshrutka network also pass near the square.

Image by Todor Bozhinov / Martyr on Wikimedia under Creative Commons License.
Sight description based on wikipedia
3

3) Monument to the Soviet Army (must see)

The Monument to the Soviet Army (Bulgarian: Паметник на Съветската армия) is a monument located in Sofia. There is a large park around the statue and the surrounding areas. It is a popular place where many young people gather. The monument is located on Tsar Osvoboditel Boulevard, near Orlov Most and the Sofia University. It represents a soldier from the Soviet Army, surrounded by a woman and a man from Bulgaria. There are other, secondary sculptural compositions part of the memorial complex around the main monument. The monument was built in 1954.
Image by Neil Carey on Flickr under Creative Commons License.
Sight description based on wikipedia
4

The Yablanski House is a Neo-Baroque house in Sofia, situated at 18 Tsar Osvoboditel Boulevard in the city centre and regarded as one of the highest achievements of the city's architecture in the first decade of the 20th century. Although the building was proclaimed a monument of culture in 1955, as of 2008 it is uninhabited and in a bad condition due to mismanagement.

The Yablanski House was built in 1906-1907 to the designs of Austro-Hungarian architect Friedrich Grünanger on the order of the wealthy financier and former mayor of Sofia Dimitar Yablanski. The exterior decoration was the work of the royal decorator of the Bulgarian Royal Family, Andreas Greis. Architecturally, the house was designed in the Baroque style with some Renaissance elements, with the interior stucco done in the Rococo style. The house's architecture draws heavily from an earlier work of Grünanger's, the Royal Palace in Sofia. Notably, the architect's home in Salzburg, where he later moved and subsequently died, is almost identical to the Yablanski House.
Image by Vassia Atanassova - Spiritia on Wikimedia under Creative Commons License.
Sight description based on wikipedia
5

The St. Clement of Ohrid University of Sofia or Sofia University (Bulgarian: Софийски университет „Св. Климент Охридски“) is the oldest higher education institution in Bulgaria, founded on 1 October 1888. The university's edifice was constructed between 1924 and 1934 with the financial support of the brothers Evlogi Georgiev and Hristo Georgiev, whose sculptures are now featured on its façade, and has an area of 18,624 m² and a total of 324 premises.

Sofia University has 16 faculties and three departments, where 14,000 students receive their education. In addition, it also disposes of a university library, a university press, a computer centre, a sports centre and several other structures. The current rector is Ivan Ilchev. Sofia University is ranked 754th in the world and 325th in Europe by the Webometrics Ranking of World Universities.
Image by Todor Bozhinov on Wikimedia under Creative Commons License.
Sight description based on wikipedia
6

The monument is 13 m high, made of grey Balkan granite and designed by Czech architect Antonín Kolář. The bronze bas-relief of the head of Levski, part of the monument, was created by Josef Strachovský, whereas Italian Abramo Peruchelli did the stonecutting work. It was inaugurated on 22 October 1895, but was planned and worked on ever since the Liberation of Bulgaria in 1878, the construction being hindered by a chronic lack of funds and negligence, and taking a whole 17 years. This ignited a wave of indignation among the Bulgarian intellectuals of the time, with the poet Konstantin Velichkov even branding this carelessness in a 1881 poem.
Image by Psy guy on Wikimedia under Creative Commons License.
Sight description based on wikipedia