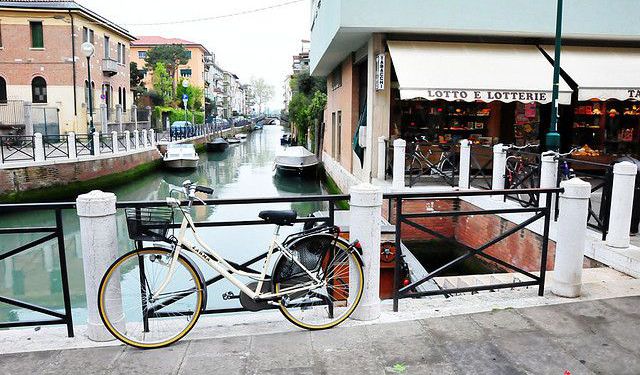 Image by Pacopus on Flickr under Creative Commons License.

Getting to Sight #1. The first tour stop (Hotel Des Bains) can be reached by: Water Bus: 5.1, 5.2, 6, 14, N. Alilaguna Bus: Verde (V)
How it works: Download the app "GPSmyCity: Walks in 1K+ Cities" from iTunes App Store or Google Play to your mobile phone or tablet. The app turns your mobile device into a personal tour guide and its built-in GPS navigation functions guide you from one tour stop to next. The app works offline, so no data plan is needed when traveling abroad.

This is one of the wealthiest hotels in Venice. The novel "Death in Venice" was written here, and the movie of the same name was shot here in 1971. The building itself was erected in 1900 and it always reflected the rich, sumptuous, magnificent wealth of Venice. It contains a few buildings with wonderful parks and swimming pools.
Image by asw909 on Flickr under Creative Commons License.
Sight description based on wikipedia
2

Venice is the city where Galileo Galilei first unveiled the telescope in 1610. From ages 4 to 104 - this is one of the most amazing places in this city. It is able to accomodate 60 persons at a time and the astonishing view upon celestial bodies will stay many years untouched in your memory.
Image by anaa yoo on Flickr under Creative Commons License.
3

Even though surrounded by the sea, Venice is not exactly a beach city. If looking for a warm and large beach, get "stranded" on the Lido island. Other than the beach itself, the island boasts magnificent sunset views. There are many little gift shops, Italian fast food restaurants and, of course, friendly locals to complete the picture. The place is also famous as the shooting location of the "Death in Venice" movie.
Image by pastorbuhro on Flickr under Creative Commons License.
4

Trattoria Favorita is a cozy restaurant in Lido, where locals and tourists have the joy of drinking some great wines, taste wonderful food and make conversation. Sometimes, the restaurant hosts local weddings. For some, this is one of the points that divides the northern and central parts of Lido Island.
Image by paulaloe on Flickr under Creative Commons License.
5

Lido island is not as fragmented by canals as Venice, this is why a canal alley is a rare thing in Lido. The authorities built this magnificent canal alley to give the city a fresh, green area that surrounds the water. The canal is not as large as the Great Canal of Venice, but if you're lucky you might get a chance to go on a little boat trip.
Image by dyobmit on Flickr under Creative Commons License.
6

A big part of Lido Island is occupied by a wonderful, green and peaceful place, the cemetery. No, no, it does not look like a typical, scary movie graveyard. The tombstones are mostly very old, each of them bearing a little part of the artistic heritage of Venice. The entrance is free. The flora within the cemetery is very varied and it looks more like a piece of heaven.
Image by Daniel Ventura on Wikimedia under Creative Commons License.
7

The church of San Nicolò al Lido is located in the northern part of Venice's Lido, and houses the relics of St. Nicholas, patron of sailors. Here is celebrated the traditional thanksgiving mass of the Sposalizio del Mare ("Marriage of the Sea"). The complex is held by the Franciscan order.

The convent and the church, located to its main access to the sea, date to the origins of independent Venice, in the early Middle Ages. From here, in 996, 998 and 1000, sailed off the first expeditions against the Narentines and the Dalmatians. The Doge Domenico Selvo was crowned here in 1071.

The church, with a single nave, is annexed to a convent and a cloister, all dating to the 16th century. The façade is surmounted by a statue of Doge Domenico Contarini, who patronized the convent. The interior houses works by Palma il Vecchio (Madonna with Child) and Palma il Giovane (San Giovannino).

Image by Sergey Ashmarin on Wikimedia under Creative Commons License.
Sight description based on wikipedia