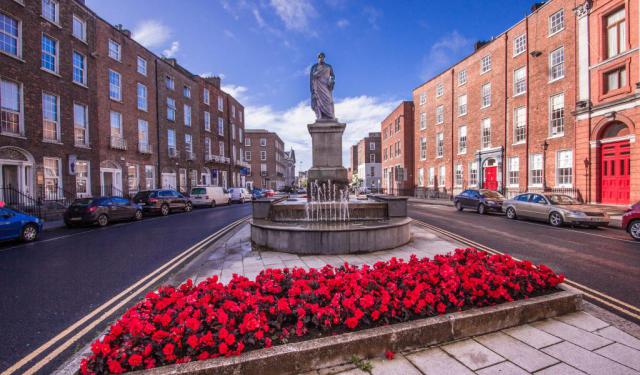 Image by D Johnston on Wikimedia under Creative Commons License.

Limerick is one of Ireland's main tourist destinations, located just a 15-minute drive from Shannon Airport. Tourism is growing at a spectacular rate in this region. The city is the first to provide visitors with 'Street Ambassadors' that help tourists make their stay more enjoyable and help them out. Take this orientation walk to visit the most popular attractions of Limerick.
How it works: Download the app "GPSmyCity: Walks in 1K+ Cities" from iTunes App Store or Google Play to your mobile phone or tablet. The app turns your mobile device into a personal tour guide and its built-in GPS navigation functions guide you from one tour stop to next. The app works offline, so no data plan is needed when traveling abroad.

The Treaty of Limerick ended both the Siege of Limerick and the war between the Jacobites and the supporters of William of Orange. The treaty protected the rights of the defeated Jacobite landed gentry who chose to remain in Ireland, most of whom were Catholics. This irregular block of limestone, which once served as a mounting block for horses, was where the agreement was signed in October 1691. To this day, Limerick is still sometimes referred to as the Treaty City.
Image by Seabhcan on Wikimedia under Creative Commons License.
Sight description based on wikipedia
2

The earliest bridge, Thomond Bridge, was built near a fording point. It was the scene of a failed defending of the city during the Siege of Limerick. At one ends sits the Treaty Stone, upon which the Treaty of Limerick is said to have been signed. The current bridge was built in 1836, replacing the earlier bridge which was also alongside King John's Castle. The bridge now forms part of the R445 (formerly N7), carrying traffic on the Northern Relief Road.
Image by wordjunky on Flickr under Creative Commons License.
Sight description based on wikipedia
4

Image by Rambling Traveler on Flickr under Creative Commons License.
Sight description based on wikipedia
6

Today the Cathedral is still used for its original purpose as a place of worship and prayer for the people of Limerick. It is open to public 6 days a week and on Sunday for worship and visitors are most welcome.
Image by martinroell on Flickr under Creative Commons License.
Sight description based on wikipedia
7

Located in the very center of Limerick overlooking the Abbey River, the Granary is one of the most popular landmarks in the city. This building is a former warehouse that was built in 1787 by local merchant Philip John Roche. Today it houses the Trinity Rooms, the City Library as well as office space.
Image by www.nosoloviajeros.com under Creative Commons License.
10

Cruises Street is the main shopping street of Limerick, Ireland. The street takes its name from Cruises Royal Hotel, the once well known Limerick landmark that stood where Cruises Street is now.
The street is relatively plain in layout and starts at a junction off O'Connell Street and runs in parallel to Denmark Street to its north and William Street which is to its south. At the centre of the street is a small square called Quimper Square. The street terminates at Chapel Lane which runs perpendicular to the street and connects to Denmark Street and William Street. A small laneway (Todd's Bow) also connects to William Street and Denmark Street from Quimper Square.
Image by William Murphy on Flickr under Creative Commons License.
Sight description based on wikipedia
11

Designed by English architect Philip Charles Hardwick, St. John's Cathedral dates from the early 1860s. It features an impressive tall steeple, which was added in 1883 based on a design by M.A. Hennessy. The exterior of St. John's was completely refurbished in 2004, with new roofing and renewed stonework. Today the cathedral cuts an imposing presence on an otherwise undeveloped side of the city centre. You can also visit an important historical Protestant church nearby.
Image by Zoney on Wikimedia under Creative Commons License.
Sight description based on wikipedia
12

The Dominican Church is one of Limerick’s most beautiful churches, and is an attractive draw for visitors to the city as well as local worshipers. Located on Baker Place since 1815, the church was last significantly renovated in 1870. Inside you can see the chapel which was built in memory of former Bishop Terence Albert O'Brien.
Image by Fergal OP on Flickr under Creative Commons License.
13

The Tait Clock was built in 1867 in honor of Limerick mayor Sir Peter Tait, who is best remembered for greatly boosting the local economy by opening the Limerick Clothing Factory. The clock is a tall and beautiful Gothic structure.
Image by FreeBird on Wikimedia under Creative Commons License.
14

The Limerick City Gallery of Art is one of the best places in Limerick to enjoy fine art works. Opened in 1936, the museum has one of the largest art collections in the whole region. Its permanent collection of Irish art from the 18th Century to the present day includes famous names such as Paul Henry and Sean Keating. A number of great rotating exhibitions are also staged here each year, featuring paintings, sculptures, photography and more.
Image by IrishFireside on Flickr under Creative Commons License.
15

The Spring Rice is a beautiful monument located within the People's Park that was erected in 1829. This monument consists of a Greek Doric column upon which rests a statue of Thomas Spring Rice, a very popular local politician. The monument was built by Henry Aaron Baker and the statue was made by Thomas Kirk.
Image by William Murphy on Flickr under Creative Commons License.