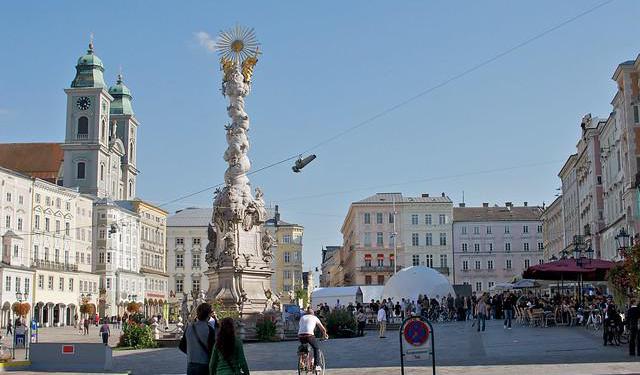 Image by tujirou on Flickr under Creative Commons License.

A provincial center in the Holy Roman Empire, founded by the Romans in the 8th century AD, the city of Linz breathes history. Closely associated with many historic figures of arts and politics – the likes of Wolfang Amadeus Mozart, Anton Bruckner, Habsburg Emperor Friedrich III and infamously Adolf Hitler lived here at the time – the city abounds in fascinating sites and attractions of great interest. To acquaint yourself with the most notable of them, follow this orientation walk.
How it works: Download the app "GPSmyCity: Walks in 1K+ Cities" from iTunes App Store or Google Play to your mobile phone or tablet. The app turns your mobile device into a personal tour guide and its built-in GPS navigation functions guide you from one tour stop to next. The app works offline, so no data plan is needed when traveling abroad.

The building of the New Cathedral, also known as the Cathedral of the Immaculate Conception, in Linz was begun in 1855 by Bishop Franz-Josef Rudigier. The first stone was laid in 1862. With 20,000 seats, the cathedral is the largest, but not the highest, church in Austria. The originally-planned, higher spire was not approved, because in Austria-Hungary at the time, no building was allowed to be taller than the South Tower of the St. Stephen's Cathedral in Vienna. At 135 m, the New Cathedral is two meters shorter than the Viennese cathedral.

Particularly noteworthy are the cathedral's stained-glass windows. The most famous is the Linz Window, which depicts the history of Linz. The windows also contain portraits of the various sponsors of the church's construction. During the Second World War some windows, particularly in the southern part of the cathedral, have been damaged. Instead of restoring the original windows, they have been replaced with windows displaying modern art. Also noteworthy is the nativity scene in the church burial vault, with its figures made by S. Osterrieder, and the display of the regalia of Bishop Rudigier.

Image by H. Raab on Wikimedia under Creative Commons License.
Sight description based on wikipedia
2

Bischofshof, located on Bishop Street, the residence of Linz’s bishop, was built between 1721 and 1726 by Michael Pruckmayr and designed by Jakob Prandtauer. Considered to be Linz’s most famous work of Baroque architecture, it also has a large garden, the Bishop's Court Garden, in the rear that is definitely worth seeing.
Image by Hans Koberger on Wikimedia under Creative Commons License.
3

Ursulinenkirche, built between 1736 and 1772, was designed by notable architects Johann Haslinger and J.M. Krinner. Its interior is adorned with sculptures and other works by famous artists such as Bartolomeo Altomonte, Antonio Belucci and Martin Altomonte. A notable later addition to this beautiful church is its Baroque facade.
Image by Michael Kranewitter on Wikimedia under Creative Commons License.
4

Nordico, one of Linz’s most well-known museums, is housed in a building originally used as a monastery dating back to 1608. Since 1973, Nordico has been devoted to the city’s history, utilizing archeological artifacts, regional art and other fascinating exhibits.
Image by Stadtkommunikation Linz on Wikimedia under Creative Commons License.
5

Landesgalerie Linz, housed in a beautiful 19th century building, is devoted to the exhibition of contemporary art. With over 5,000 works, including paintings, sculptures, photographs, prints and more, this gallery promotes emerging artists and features one of the greatest collections of works by the famous Expressionist Alfred Kubin.
Image by Rob Sawyer on Flickr under Creative Commons License.
6

As the successor of the New Gallery of the City of Linz, the Lentos Art Museum, which opened in May 2003, is among the most important museums of modern art in Austria. The clear and coherent structural design provides Linz with a museum of art of international status, positioned in the urban context. The internationally acclaimed 130 meter long building by the Zurich architects Weber & Hofer provides approximately 8000 square meters for use. The appearance of the building is remarkable for its transparent glass casing, attractively lit at night. There is a café with a viewing terrace on the ground floor.

The art museum collection comprises around 1500 works from the areas of painting, sculpture and object art, over 10,000 works on paper, and about 850 photographs, including significant contributions to the development of artistic photography. The earliest works among the museum's holdings are from the first half of the 19th century.

Image by B.Wagner on Wikimedia under Creative Commons License.
Sight description based on wikipedia
7

Designed by Pietro Francesco Carlone, Ignatiuskirche, also known as the Old Cathedral, was built between 1669 and 1678. From 1785 to 1909 it served as the Cathedral of the Diocese of Linz. This single-nave Baroque church has lateral chapels and galleries, as well as a closed choir and stucco work by J.P. Spaz and G.B. Mazza. The marble high altar by Colomba and Barberini with a picture by Antonio Bellucci and the Aloisian altarpiece by Bartolomeo Altomonte are particularly noteworthy. The choir pews originate from the former monastery church in Garsten, while the organ by Franz Xaver Krismann comes from Engelzell Monastery. From 1856 to 1868 famous composer Anton Bruckner served as its organist.

The site of Upper Austria’s provincial government and parliament, Landhaus was originally a part of Minoritenkirche and was bought in 1564 by the city. Be sure to check out its Renaissance architecture and three inner courtyards. The villa courtyard hosts classical concerts during the summer and features a beautiful fountain in its center.
Image by Gryffindor on Wikimedia under Creative Commons License.
9

Located behind Landhaus, Mozarthaus is where the Austrian composer Wolfang Amadeus Mozart lived in 1783. The place where he composed Linz Symphony, this building is a 16th century construction with a beautiful Baroque facade. Be sure not to miss this historic house, which has been the residence of several notable figures over time, and see its Renaissance courtyard.
Image by Anzi9 on Wikimedia under Creative Commons License.
10

Martinskirche, first mentioned in 799, is Linz’s oldest church, though no one knows for sure when this beautiful church was built. Particularly noteworthy is its Carolingian architecture and Romanesque and Gothic door and window arches.
Image by Gerhard Anzinger on Wikimedia under Creative Commons License.
11

First documented in 799, Linz Castle was entirely rebuilt in 1477 by Emperor Friedrich III. You will find the partial remains of the defensive walls, the bastions, the west entrance (Friedrichstor) adorned by a stone coat-of-arms (1481) bearing the inscription "AEIOU" ("The whole world is subject to Austria") and the imperial initials. Around 1600, during the rule of Rudolph II, the castle was redesigned and expanded according to plans of Dutch master builder Anton Muys. This powerful four-story block with two inner courtyards and the main gate to the city (Rudolfstor) date back to this time. Between 1953 and 1963, the fortress was rebuilt as the Upper Austrian Castle Museum. It contains permanent exhibitions of art from the Middle Ages to the present, historic weapons and musical instruments, coins, folklore and the Kastner collection.

The Museum of the History of Dentistry in Upper Austria, near the Linz Genesis Museum, is devoted to the evolution of dentistry from the 17th century to the present. In addition to historical facts, it also contains exhibits highlighting curiosities and myths about teeth and dental health. It is a fascinating museum, though not for the squeamish.
Image by ♥ellie♥ on Flickr under Creative Commons License.
13

Trinity Column, in the center of the Main Square, is a Baroque structure completed in 1723. Carved in white marble by Sebastian Stumpfegger according to the design of Antono Beduzzi, it bears a dedication to the Holy Trinity by the guilds, the emperor and the people of Linz in gratitude for deliverance from the dangers of war (1704), fire (1712) and plague (1713). The column is flanked by sculptures of patron saints Sebastian, Florian and Carlo Borromeo.

The Old City Hall, a 16th century building, is one of Linz’s most important attractions. In 1659 it was expanded, with a Baroque facade added. It also has Gothic and Renaissance elements in its architecture. The seat of the mayor and the municipal council, it also contains the Linz Genesis Museum and the Linz Museum of the History of Dentistry in Upper Austria.
Image by Stadtkommunikation Linz on Wikimedia under Creative Commons License.
15

The Ars Electronica Center, also known as the Museum of the Future, is one of the most fascinating sites in Linz. Showcasing the most modern technological concepts, you will find six floors of amazing interactive exhibits from hi-tech laboratories all over the world here, including ones on robotics, future speculation and much more.

Linz is home to some of Europe’s oldest churches. Besides being historic sites, most of them are beautiful architectural pieces. The following tour highlights the most significant and spectacular religious buildings in Linz.

Linz, as the capital city of Upper Austria, has a very rich nightlife. Its downtown area is packed with many great bars, live music venues and posh nightclubs. Be sure to take the following tour highlighting the best nightlife Linz has to offer.

Linz, the capital of Upper Austria, is one of the most beautiful cities in the country. You will find a host of historic sites, great architecture, cultural venues and modern touches here. The best way to absorb the culture of this city is to visit its museums. Take the following tour to discover the great museums Linz has to offer.