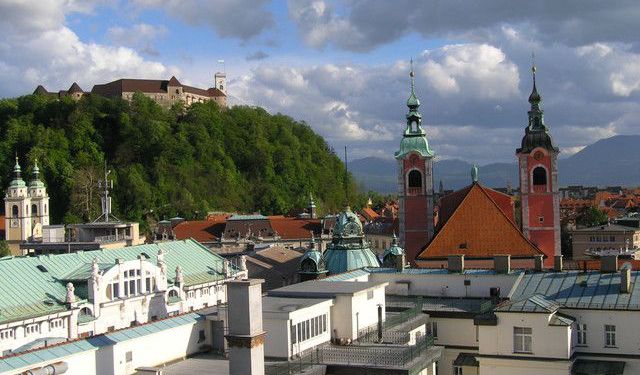 Image by Shermozle on Wikimedia under Creative Commons License.

While the streets of Ljubljana are an art museum in their own right, the city also proudly boasts some truly good galleries. Small, cozy, colorful, stylish, and exuding a bohemian atmosphere, the galleries of Ljubljana have something to amaze everyone with. Take your time and this tour to explore the city's top galleries.
How it works: Download the app "GPSmyCity: Walks in 1K+ Cities" from iTunes App Store or Google Play to your mobile phone or tablet. The app turns your mobile device into a personal tour guide and its built-in GPS navigation functions guide you from one tour stop to next. The app works offline, so no data plan is needed when traveling abroad.

Galerija Fotografija is a popular venue with local photographers, as it holds numerous temporary exhibitions. Galerija Fotografija also organizes occasional meetings with authors of the exhibited works, so if lucky, you can meet some of the most talented Slovenian photo artists in person, when you get there.
Image by Ziga on Wikimedia under Creative Commons License.
2

Škuc Gallery has occupied premises at 21 Stari Trg in Ljubljana since 1978. It is part of the ŠKUC association, which has been one of the pillars of non-profit culture in Slovenia. Back in the late 1970s, the opening of this exhibition venue came as a response to the mainstream exhibition policy of the established national galleries and art institutions in the then Yugoslavia, part of which Slovenia was at that time.

Located in the center of Ljubljana, Galerija Hest is an art gallery that features contemporary Slovenian artists, both emerging and famous. It holds a rich collection of works, most of which are for sale. The main building of Galerija Hest is located on Zidovska Ulica, not far from Zala Gallery.

Image by grey74 on Flickr under Creative Commons License.
4

In place for over 15 years now, Zala Art Gallery is set to promote Slovenian artists by exhibiting their works in a fashionable manner. The gallery opened in 1991 and since then has done much to introduce the broader public to Slovenian artistic heritage. Most of the exhibited items are for sale.
Image by Galerija Zala under Creative Commons License.
5

5) Gallery of Modern Art (must see)

The Gallery of Modern Art (or Museum of Modern Art), also known as Moderna Galerija, showcases an extensive collection of the 20th century Slovenian art by Jakob Savinšek, Tone Kralj, France Mihelič and other prominent painters. The two storied building housing the museum was designed by Edvard Ravnikar. The museum is located close to the National Gallery of Slovenia.

Image by Ziga on Wikimedia under Creative Commons License.
6

6) National Gallery of Slovenia (must see)

The National Gallery of Slovenia was founded in 1918, after the dissolution of Austria-Hungary and the establishment of the State of Slovenes, Croats and Serbs. Initially, the gallery was hosted in the Kresija Palace of Ljubljana, but in 1919 moved to its present location. The gallery hosts a permanent collection of art pieces from the Middle Ages to the early 20th century. The original Baroque-style Robba fountain can also be seen in the central glass gallery of the building, where it was placed after an extensive restoration in 2006.

Operation hours: Tuesday to Sunday: 10am to 6pm, Thursdays to 8pm
Closed: Mondays and January 1st, May 1st, November 1st and December 25th
Open until 3pm: June 24th and 31st December
Image by Ziga on Wikimedia under Creative Commons License.
Sight description based on wikipedia