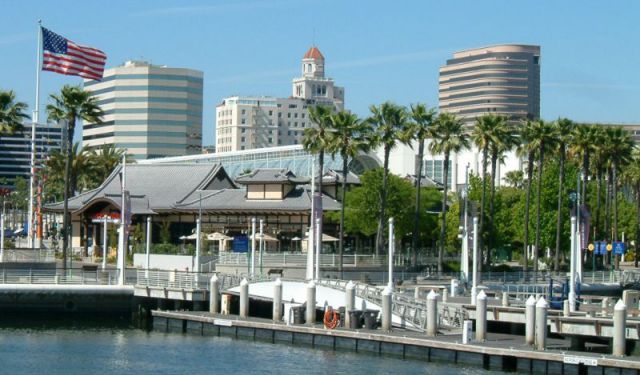 Long Beach, dubbed the "Aquatic Capital of America”, is a popular coastal port and resort with a wealth of sea-themed attractions, of which the most prominent is the country's biggest Aquarium of the Pacific. The city's cultural and architectural scene is just as colorful; a vivid example of that is the multi-purpose Convention & Entertainment Center. To explore some of Long Beach's main historic buildings and places of interest, take this orientation walk.
How it works: Download the app "GPSmyCity: Walks in 1K+ Cities" from iTunes App Store or Google Play to your mobile phone or tablet. The app turns your mobile device into a personal tour guide and its built-in GPS navigation functions guide you from one tour stop to next. The app works offline, so no data plan is needed when traveling abroad.

1) The Villa Riviera (must see)

Villa Riviera is a registered historic building on Ocean Boulevard in the Alamitos Beach neighborhood of Long Beach. From the time of its completion in 1929 through the mid-1950s, it was the second-tallest building, and the tallest private building, in Southern California. The 16-story French Gothic building has been called the city's "most elegant landmark" and a building that "has helped define the city." The building was added to the National Register of Historic Places in 1996 and is currently used as condominiums.

Built from 1927-1929 at a cost of $2.75 million, the Villa Riviera is a 16-story French Gothic Building. The structure is topped with a steeply pitched copper roof with a green patina. The structure features fierce-looking gargoyles perched along the ridges of the higher floors. The building was also equipped with luxurious features, including a ballroom, Italianate roof garden, lounges, high-speed elevators, "vacuum-type heating," and a 100-car garage.

Image by Los Angeles on Wikimedia under Creative Commons License.
Sight description based on wikipedia
2

East Village Arts District is located on the east side of downtown Long Beach and is teeming with art venues, galleries and different shops. Walking in this popular arts neighborhood, you will find the city's most eclectic boutiques, unique retailers and shops. The district is home to a number of independent stores, where you will find everything you want, from designer clothes and specialty sneakers to old books and antique furniture. Every Saturday this area hosts an organic Farmer's Market.
Image by artsytartsyjewels on Flickr under Creative Commons License.
4

Our next sight is Insurance Exchange Building, which is situated on East Broadway. It is a historic building that is listed on the National Register of Historic Places and was originally founded as Middough's Boy's Shop in 1925. The Insurance Exchange Building is among downtown's finest terra cotta clad buildings, in a Beaux Arts style. The foyer and Broadway entry were modified in Art Deco style. Its façade features rich polychrome ornaments, including flowers, children, griffins, etc. This eight-storey building once housed the Superior Court on its upper floors.
Image by Los Angeles on Wikimedia under Creative Commons License.
5

Located between Ocean Boulevard and 3rd Street, Pine Avenue is the most popular and prominent dining, entertainment, and shopping district in the city. This shopping street is home to a number of diverse shops and discount stores.
Image by Los Angeles on Wikimedia under Creative Commons License.
6

6) The Pike at Rainbow Harbor (must see)

Founded in 1902, the Pike originally represented an amusement ground, and it is situated between the Convention Center and the Aquarium. This shopping area houses several independent arcades, food stands, gift shops and other shopping venues. Here you can find anything from good books to tasty ice cream and local gifts.
Image by sburke2478 on Flickr under Creative Commons License.
7

7) Aquarium of the Pacific (must see)

The Aquarium of the Pacific is an aquarium on a 5-acre (20,000 square meters) site on Rainbow Harbor in Long Beach. The Aquarium sees 1.5 million visitors a year and has a total staff of over 900 people including more than 300 employees and about 650 volunteers. The Aquarium features a collection of over 11,000 animals representing over 500 different species. It focuses on the Pacific Ocean in three major permanent galleries, sunny Southern Californiaand Baja, the frigid waters of the Northern Pacific and the colorful reefs of the Tropical Pacific. The Aquarium architecture is inspired by the towering, breaking waves of the Pacific and mirrors the fluid and dynamic temper of the ocean. Construction of the Aquarium was completed on June 20, 1998 when the Aquarium opened to the public.

Image by Eric Kilby on Wikimedia under Creative Commons License.
Sight description based on wikipedia
8

Although Long Beach is famous as a coastal resort, the city is also home to a number of cultural venues, including interactive museums, theaters, galleries, libraries, etc. Its rich collections and exhibitions will teach you about Long Beach fine art, diverse cultures of the Pacific Islands, contemporary Latin American art and culture, and much more. Next walking tour will lead you to the most...  view more

Long Beach started its historic preservation program in 1980, and added a lot of valuable sights to the National Register of Historic Places, including historic landmarks, historic buildings, historic places and historic objects. The buildings that were recognized by City Council have special architectural and historical value and preserve city’s history. Next self-guided tour will lead you...  view more

Long Beach is a shopping paradise for those who love trendy boutiques and eclectic shops. The city houses a number of specialty stores, lively markets, trendy fashion shops and fashionable furniture shopping venues. Don’t hesitate to take the next walking tour to find the best shopping spots in Long Beach.