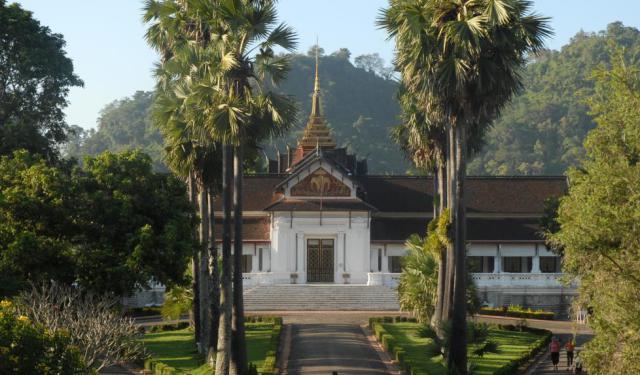 Image by jiazi on Flickr under Creative Commons License.

Luang Prabang is the tidiest and most culture-oriented city in Laos. Inhabited for thousands of years, it was the country's royal capital until 1975. The city is known for a plethora of cultural and historic attractions, much as for the abundance of Buddhist temples – wats – including the gilded 16th century Wat Xieng Thong, and Wat Mai, the former residence of Laotian chief Buddhist. To learn more about Luang Prabang's main attractions, follow this orientation walk.
How it works: Download the app "GPSmyCity: Walks in 1K+ Cities" from iTunes App Store or Google Play to your mobile phone or tablet. The app turns your mobile device into a personal tour guide and its built-in GPS navigation functions guide you from one tour stop to next. The app works offline, so no data plan is needed when traveling abroad.

Wat Mahathat, also known as Wat That was established in 1548 by King Say Setthathirath. In 1900, the main hall of the temple suffered a terrible blow and was rebuilt in 1910. Since then, it has been restored several times, with some new and beautiful elements being added to the facade and to the interior of Wat Mahathat. It is one of the most richly decorated temples in Luang Prabang.
Image by Allie_Caulfield on Flickr under Creative Commons License.
2

The Traditional Arts and Ethnology Centre which provides information about the Laoan culture and traditions. It includes all the ethnicities in the country. It contains a wide collection of objects which represent the religion, lifestyle and character of the locals. Many seminars, exhibitions and other similar activities are often held in the Traditional Arts and Ethnology Centre. Even if it was opened only in 2007, it became very popular among locals and tourists.

Image by grjenkin on Flickr under Creative Commons License.
3

Hmong Night market is definitely the most popular shopping spot in Luang Prabang, both among local people and among visitors. Every evening of the week, local salesman from the neighbourhood localities provide home-made products of all kinds, from traditional food and ingredients to baskets and wooden souvenirs. Bargaining at the evening market is usually welcome, but even so, prices are lower than in any other market or shop in the city.

Image by Alcyon on Wikimedia under Creative Commons License.
5

Haw Pha Bang is the shrine of the Royal Palace. It was built in 1963. Even if it's relatively new compared to other similar buildings in Luang Prabang, it is constructed using similar elements and techniques. Haw Pha Bang hosts the most sacred Buddhist image in Luang Prabang, which is held in a pavilion. The shrine suffered hardships from 1975 until 1993, when it was restored.
Image by Ilse Reijs and Jan-Noud Hutten on Flickr under Creative Commons License.
6

The Royal Palace was built in 1904 during the French colonial era for King Sisavang Vong and his family. The site for the palace was chosen so that official visitors to Luang Prabang could disembark from their river voyages directly below the palace and be received there. In 1975, the palace was converted into a national museum.

The architecture of the building has a mixed of traditional Lao motifs and French Beaux Arts styles, and has been laid out in a double-cruciform shape with the entrance on one side of the lower crossbar. Above the entrance is a three-headed elephant sheltered by the sacred white parasol, the symbol of the Lao monarchy. On the right of the entrance is the King's reception room, where busts of the Lao monarchy are displayed along with two large gilded and lacquered Ramayana screens, crafted by the local artisan Thit Tanh. On the left of the entrance hall, the secretary's reception room is filled with paintings, silver and china that have been presented to Laos as diplomatic gifts.

The throne room contains the Crown Jewels of Laos.

Image by Allie Caulfield on Wikimedia under Creative Commons License.
Sight description based on wikipedia
7

Wat Xieng Muan is an antique temple in Luang Prabang. The full name of this temple is at Xieng Muan Vajiramangalaram. It was built in 1853 by Phragna Sisonxay. This temple was restored and is preserved by the UNESCO project. It has a very specific construction, the roof, balustrades and walls being built in a very special style. Wat Xieng Muan also has a nice classroom, where novice monks study the art of painting, carving in wood and other skills.
Image by Allie_Caulfield on Flickr under Creative Commons License.
8

Wat Xieng Thong is a Buddhist temple, located on the northern tip of the peninsula of Luang Phrabang, Laos. It was built in 1560 by King Setthathirath and was under royal patronage during the Kingdom of Laos. Like the royal palace, the wat was placed near the mekong. In 1880, the Tripitaka Library was added and the drum tower followed in 1961. There are several small halls and stupas that contain Buddha images of the period. There is a reclining Buddha sanctuary, which contains an especially rare reclining Buddha that dates from the construction of the temple. In 1931, the image was taken to Paris and displayed at the Paris Exhibition and was kept in Vientiane until 1964, when it returned to Luang Phrabang. At the near compound's eastern gate stands the royal funerary carriage house, which houses the funeral carriage; it stands 12 meters high and there are various urns for members of the royal family.
Image by Mr ATM on Flickr under Creative Commons License.
Sight description based on wikipedia
9

Wat Sensoukarahm is a temple near the Mekong River. It was built in 1718. Because of the damages it underwent throughout its history, the temple was renovated a few times - in 1932 and 1957. The facade of Wat Sensoukarahm is one of the most fascinating in the whole Luang Prabang. This temple is built in Thai style, but is different from the other temples due to its bright red colour embroidered with gold ornaments.
Image by Agnieszka Wetton on Flickr under Creative Commons License.
10

Wat Aham, which translates to Monastery of the Open Hearted, is located in the center of Luang Prabang. The temple is famous due to the fact that it hosted the Supreme Patriach of Laotian Buddhism in the nineteenth century. It contains a shrine dedicated to worship of the spirits, whose shrines were destroyed and interdicted throughout history. Nowadays it is used for preserving the ritual costumes which are used in different traditional celebrations.
Image by Allie_Caulfield on Flickr under Creative Commons License.
11

Wat Wisunalat, also called Wat Vixoun is the oldest temple in Luang Prabang. It was named in honor of King Wisunalat. He was the one who built the present building. The temple suffered a big fire in 1887, but was restored afterwards, its design remaining almost the same. Wat Wisunalat contains a very big collection of different Buddhas made from diverse materials like wood and bronze. The Watermelon Pagoda is also a very famous element of Wat Wisunalat.
Image by MCS@flickr on Flickr under Creative Commons License.
12

Wat Tham Phu Si is a temple located in the downhill right center of Luang Prabang, overlooking the River Khan. The temple is located in a small cave. It contains one of the oldest statues of Buddha, done in Pha Kachai style. Wat Tham Phu Si is the most notable attraction on the Phu Si hill.
Image by joaquinuy on Flickr under Creative Commons License.
13

Initially constructed in 1804 by King Anourathurath, That Chomsi was restored in 1914 and again in 1926 when the 328-step staircase was erected. Due to its peculiar position on top of the hill, the rectangular shape stupa stays on a three-tiered base with lotus-flower designs in the four corners. From foot to tip, the stupa measures 21 metres. A terrace at the foot of the stupa offers a momentous panoramic sight of the town.
Image by dms_303 on Flickr under Creative Commons License.
14

The Phou Si Hill is a small hill in the center of the city; the stairs leading to the top are located across the Royal Palace. All the way at the top of Phou Si, there are numerous attractions: shrines, temples and Buddha statues. A few of the temples on the hill are That Chomsi, Wat Phra Buddabhat and Wat Pa Huak. The view from the Phou Si Hill's top is absolutely breathtaking, providing a view of the entire city.
Image by Allie Caulfield on Flickr under Creative Commons License.