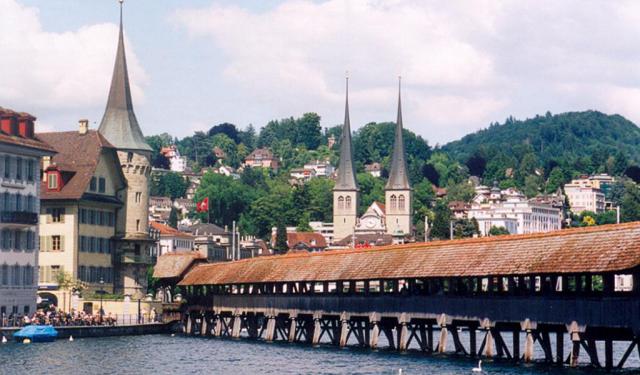 Image by edwin.11 on Flickr under Creative Commons License.

Due to Lucerne's long religious and cultural history, its architecture is one of the most popular for tourists in all of Switzerland. It boasts several remarkable bridges because of how the city is divided by the Reuss river. Your attention will also be struck by the magnificent churches and historic castles and towers. Take our walking tour to discover the most famous architectural sights in Lucerne.
How it works: Download the app "GPSmyCity: Walks in 1K+ Cities" from iTunes App Store or Google Play to your mobile phone or tablet. The app turns your mobile device into a personal tour guide and its built-in GPS navigation functions guide you from one tour stop to next. The app works offline, so no data plan is needed when traveling abroad.

Constructed by Lux Ritter in 1557, Ritter Palace began as a private residence. It features an early renaissance Florentine style of architecture that makes it a famous tourist attraction. The Jesuits, who first came to the city in 1574, were long-term occupants of the building. Today it is the seat of the cantonal government. Inside you can admire the "Dance of Death" paintings and a spectacular inner courtyard featuring a three-story loggia with Tuscan columns.
Image by Lucerne Tourism. under Creative Commons License.
2

This impressive church is considered to be the first large baroque style churches ever built in Switzerland. It's located on the south bank of the Reuss river in a triangular area known as Kleinstadt. Special points of interest include the sacristy, the rich stucco work and church relics including the penitential robe of St. Nikolaus von Fluee.

Why You Should Visit:
While it is very pleasing from outside along the river promenade, the rich, unchanged interior in pink and white is what really stands out. It may look closed, but just try the front doors and go on in!

Image by moppet65535 on Flickr under Creative Commons License.
3

The Chapel Bridge is a covered wooden footbridge spanning diagonally across the Reuss River in the city of Lucerne. Named after the nearby St. Peter's Chapel, the bridge is unique since it contains a number of interior paintings dating back to the 17th century, although many of them were destroyed along with most of the centuries-old bridge in a 1993 fire. Subsequently restored, the Kapellbrücke is the oldest wooden covered bridge in Europe, as well as the world's oldest surviving truss bridge. It serves as the city's symbol and as one of Switzerland's main tourist attractions.

The bridge itself was originally built in 1333 as part of Lucerne's fortifications. It linked the old town on the right bank of the Reuss to the new town on the left bank, securing the city from attack from the south (i.e. from the lake). The bridge initially had a length of over 200 metres (660 ft), although due to numerous shortenings throughout the years and river bank replenishments, the bridge now totals only 170 metres (560 ft) in length.

Why You Should Visit:
From the charming farmer's markets along the water's edge to the infamous swans floating across the water, this bridge is dreamy to say the least.
Along its both sides you'll find lush flowers pouring over the edges and artwork every few feet that dates back to the 1600s.

Tip:
Experience it at night also with the city lights, swans, flowers and vibrant atmosphere. Both banks are full of great shopping and fantastic restaurants.
Image by Andrew Bossi on Wikimedia under Creative Commons License.
Sight description based on wikipedia
4

The Rathaus was constructed in 1606 by Anton Isenmann. This town hall has a Renaissance architectural style, with an Emmentaler-style roof. Right above the arcades, you will find the Kornschütte hall, which used to be a major trading venue.

Why You Should Visit:
Part of the city's urban landscape and a beautiful sight as such, its tall clock tower dominating the right bank of Reuss river.
Fits perfectly into the Old Town architectural/historical ensemble, though it may not accessible on the inside.
Makes for a pretty good photo op and close to other attractions such as shops, restaurants and bars.
Image by thisisbossi on Flickr under Creative Commons License.
5

This is one of Lucerne’s amazing buildings, with extensive decoration in frescoes. Its front elevation has mural of the Pfistern family tree decorated with local coats of arms. The former Guild Hall is now a restaurant serving Swiss specialties.
Image by schoschie on Flickr under Creative Commons License.
6

The Dornach House is a charming neo-Gothic style building with Mannerist fresco paintings. Built around 1900, it is dedicated to the Swiss victory in the Battle of Dornach. During this battle in July 1499, the troops of Emperor Maximilian I were decisively beaten by the Old Swiss Confederacy. The war ended with independence of Switzerland from the Roman Empire.
Image by Clint & April on Flickr under Creative Commons License.
7

Musegg Wall is a medieval town wall that was built in the 15th century. Visitors flock here for the ancient paths, original architecture and other curiosities, such as the oldest clock in the city. What's more, the top of the wall features some of the most amazing views you can get of the lake, mountains and the river.

Why You Should Visit:
Top-of-the-list tourist attraction, especially if the weather is nice!

Tip:
You can do the full round, starting from the Nölliturm side (be prepared for a short but steep hike up) and then going up onto the city wall for the part that is open to the public (if you are afraid of heights you may need to explore whether that feels right for you) and then make your way back into the city center.
Some of the towers are open to going inside (check for open dates/times as it is a bit seasonal), but have some rather steep stairs, so caution is advised.
Image by Paebi on Wikimedia under Creative Commons License.
8

The Church of St. Leodegar is the most important church and a landmark in the city of Lucerne. It was built in parts from 1633 to 1639 on the foundation of the Roman basilica which had burnt in 1633. This church was one of the few built north of the Alps during the Thirty Years War and one of the largest and art history rich churches of the German late renaissance period. In 1874 the parish church of St. Leodegar was founded and with that, the church became simultaneously a monastery church and parish church, as it is today.

Why You Should Visit:
The views at the top are majestic overlooking the Old Town and Lake Lucerne.
Inside the church, the details are quite pretty and there are regular organ concerts.