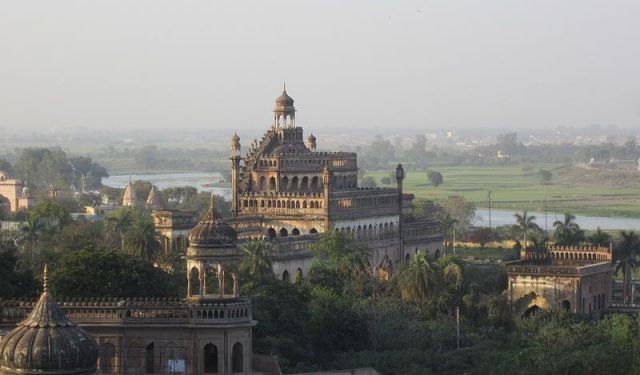 Image by Pr1delhi on Wikimedia under Creative Commons License.

Being one of the most beautiful cities in India, Lucknow has much to offer to the tourists seeking for an unforgettable sightseeing vacation. Its old buildings keep the ancestry's legacy in their beautiful shapes and forms. This tour will help you to discover and explore the most marvelous Lucknow attractions.
How it works: Download the app "GPSmyCity: Walks in 1K+ Cities" from iTunes App Store or Google Play to your mobile phone or tablet. The app turns your mobile device into a personal tour guide and its built-in GPS navigation functions guide you from one tour stop to next. The app works offline, so no data plan is needed when traveling abroad.

The Residency is a complex of buildings that were raised in 1800 by Nawab of Oudh, Saadat Ali Khan. It was the residing place for the British General who was a representative in the court of Nawab. In 1857 the place suffered significant damage during a prolonged battle, known as the Siege of Lucknow. The Residency has been kept as it was at the end of the battle, and the walls are still scarred by cannon shots. Even after India attained Independence, little has changed. Around the ruined building there are lawns and flowerbeds. There is a graveyard at the nearby ruined church where 2000 men, women and children are buried, including Sir Henry Lawrence who lost his life defending the empire. There is an inscription near his tomb that reads "Here lays the son of Empire who tried to do his duty."


Image by Rudolph.A.furtado on Wikimedia under Creative Commons License.
Sight description based on wikipedia
2

Located opposite the Hotel Clarks Avadh, Chattar Manzil, or the Umbrella Palace, is a structure of strikingly different architecture. It has large underground chambers and a dome topped by a gilt umbrella. Various famous 19th century photographers, such as Samuel Bourne, Felice Beato, and Darogha Ubbas Alli took photographs of this imposing monument. Presently, the palace has been remodeled to house the offices of the Central Drug Research Institute (CDRI).
Image by Harshvardhansonkar on Wikimedia under Creative Commons License.
Sight description based on wikipedia
3

The Globe Park is a small recreation area in the Old Town of Lucknow, located next to the Begum Hazarat Mahal Park. The place is renown for its globe sphere, representing all the continents, islands, oceans and seas. The globe is fixed with the help of a semicircle, that features zodiac signs and has a huge mythical fish at its foot. The Earth model used to rotate attracting park visitors.
Image by RC Mishra on Flickr under Creative Commons License.
4

Begum Hazrat Mahal Park is located in the heart of the city and pays the tribute to Nawab Wajid Ali Shah’s first wife. She was very beautiful and courageous, and had great leadership qualities. She stood up against the British East India Company during the Indian Rebellion of 1857. When her husband was sent into exile to Calcutta, she seized control of Lucknow, took charge of the affairs of the state of Awadh and placed her son, Prince Birjis Qadir, as its ruler, but was compelled to give it up. She refused allowance and status from the British. Subsequently, she found asylum in Nepal where she lived until the end of her life.

On 15 August 1962, Begum Hazrat Mahal received special recognition at a ceremony in the old Victoria Park where a marble memorial was open by the state Government in her memory, for she played a an important role during the first freedom movement in 1857. This memorial was embellished with colorful flowers, light bulbs and neon tubes. A marble tablet with four round brass plaques holds up the coat of arms of the Awadh royal family.

Begum Hazrat Mahal Park has hosted many Dusshera festivals when Ravan (the bad character in Hindu Sanskrit) is set on fire as a symbol of good triumphing over evil. Also, numerous Lucknow Mahotsavs have been organized here. These festivals are meant to showcase the art and culture of the Uttar Pradesh state and to promote tourism in the area. The park is a very green and beautiful landscape. Scores of people walk through it in the mornings, and many more find delight visiting the Park in the evenings when the fountains go up and the lights are turned on.

Near the Begum Hazrat Mahal Park there is Nawab Saadat Ali Khan’s mausoleum. It was built by Saadat Ali Khan's son to memorialize his father as nawab wazir of Oudh. The tomb was built in the best classical traditions of the Indo-Islamic style of architecture. Each of the belfries, as well as the main dome, is crowned with a graceful gilded finial. The floor inside the tomb is covered with black and white marble, which is rather rare for this part of India, due to the scarce marble resources and its extremely high price. The arched verandas on southern and eastern sides of the building house the graves of nawab's daughters and wives.

Why You Should Visit:
Peaceful, clean, and the beautiful garden adds a mark to its scenic beauty.

Mushir Zadi Tomb stands close to Saadat Ali Khan Tomb. It is built with lakhauri bricks and chunam. This small, but perfectly proportioned structure features four octagonal domed towers. An elegant peak, creating an effect of a special grace and refinement, crowns the main dome. Decorated with stucco moldings and patterns, Mushir Zadi mausoleum qualifies as one of the most beautiful and precious buildings of Uttar Pradesh. It is said that few monuments in the country can compete with these two tombs in their grandeur and beauty.
Image by Ankitkumarsaxena on Wikimedia under Creative Commons License.
7

Pariwartan Chowk, or the Change Square, is a plaza located in the very heart of the city, in the major shopping area of Lucknow – Hazratganj. During official celebrations, Pariwartan Chowk is decorated with thousands of glittering lights, creating a festive mood. The Change Square also features metallic statues of Jyotiba Phule, Chattrapati Shauji Maharaj, Narain Guru, as well as B. R. Ambedkar, and a marble figure of Gautam Buddha in the center.
Image by anandamoy chatterji on Flickr under Creative Commons License.