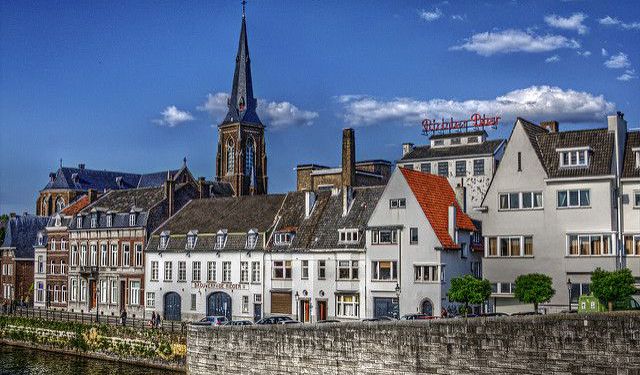 Image by Peter Köves on Flickr under Creative Commons License.

Among other things, the Dutch city of Maastricht is noted for its medieval architecture and vibrant cultural scene. The cobbled streets of the old town, the Gothic-style St. John Church (Sint Janskerk) and the Romanesque Basilica of St. Servatius are just a few local sights worth checking out. Follow this orientation walk to explore other “must-sees” of Maastricht.
How it works: Download the app "GPSmyCity: Walks in 1K+ Cities" from iTunes App Store or Google Play to your mobile phone or tablet. The app turns your mobile device into a personal tour guide and its built-in GPS navigation functions guide you from one tour stop to next. The app works offline, so no data plan is needed when traveling abroad.

The City Hall of Maastricht is a distinctive building located on Market Square. It was designed by Pieter Post, and the first stone was laid in 1659. It was finished in 1684 with the construction of the tower. The Hall represents the Revival style of architecture. The design takes into account the two rulers of that period- the Duke of Brabant and the Prince-Bishop of Liège. The left side of the building was Brabant’s and the right side was designed for Liège. Several original sections of the facade and interior have been renovated. The chimneys were demolished.
Image by Phernambucq on Wikimedia under Creative Commons License.
2

Maastricht Street Market is located on Market Square. At the stalls surrounding City Hall you will find all kinds of fresh food from local farmers and bakers. There is also a large choice of textiles, cloths, flowers and plants. Prices are quite reasonable.
Image by Kleon3 on Wikimedia under Creative Commons License.
3

Built between 1267 and 1280, Dominikanerkerk is considered to be one of the oldest Gothic structures in the country. The church is located on a street bearing the same name, close to Vrijthof Square. The chapel was added in the 14th century, although a tower that was initially planned was never built. Today this former church houses a large book store and serves as a venue for concerts and lectures.
Image by Otter on Wikimedia under Creative Commons License.
4

The statue of Hendrik van Veldeke is located at a small square named in his honor near St. Servaas Church. Hendrik van Veldeke was the first author to write in Dutch. One of his well-known works, "The Legend of St. Servatius", was written in the 12th century. His other famous story is about the Trojan hero Eneas. He also wrote stories, poems and songs that were sung by troubadours across Europe. The statue of Hendrik van Veldeke is made of bronze and was created by famous Maastricht sculptor Charles Vos. It was unveiled in 1934.
Image by Otter on Wikimedia under Creative Commons License.
5

Sint-Janskerk is one of the most distinctive buildings in the city center. It was erected in honor of St. John the Baptist. The original church was built in the 13th century, but the current church dates back to the 14th century. The church has a distinctive red tower and a small bell called the “gate clock”. The building is one of many Gothic constructions in Maastricht. The church has a three-aisle nave and a choir. Inside you will find a Louis XVI-style pulpit from the 18th century, marble gravestones and several murals.
Image by Euku on Wikimedia under Creative Commons License.
6

St. Servatius, also known as St. Servaas Church, is the most famous religious building in Maastricht. It was built on the site of St. Servatius’ grave. The building’s architectural style is Romanesque but some Gothic elements were added later. The church is located at Vrijthof Square and was erected between the 11th and 13th centuries. Its Bergportaal, built in the 13th century, was the first Gothic construction in the city. It also has a Gothic tower, which was constructed in the 16th century. The interior is richly adorned and is worth seeing.
Image by Michielverbeek on Wikimedia under Creative Commons License.
7

Museum Aan Het Vrijthof is housed in the so-called Spanish Government building, one of the oldest non-religious buildings in Maastricht, facing the city's main square, Vrijthof. The building was originally part of the ecclesiastical territory of the chapter of the church of Saint Servatius and was probably built for one of the chapter's canons. In the early 16th century the house was rebuilt and enlarged. At that time the facade on the ground floor was largely blind, except for an arched gateway that led into the courtyard.

In 1954, the wealthy couple Frederik Wagner and Ambrosina de Wit bequeathed their art collection to a foundation based in the city of Maastricht. Since 1973 the Wagner-De Wit collection has been on display in what was then called Museum Spaans Gouvernement. From 2010 till 2012 the museum closed for renovations and extensions. The renovation included a partial restoration of the originally largely blind facade of the Spanish Government building. The extension consisted of adding a neighbouring building to the museum's exhibition space, as well as roofing over the courtyard. The enlarged museum is now about two and a half times bigger than the old premises.

Image by Saturn V on Wikimedia under Creative Commons License.
Sight description based on wikipedia
8

The Vrijthof is a square in the center of Maastricht . It is the largest square in the center of the Limburg capital. The square is known for its many monuments (including the Netherlands unique church twins), various cultural facilities, many café terraces and events that take place regularly.
Image by Jorge Franganillo on Flickr under Creative Commons License.
Sight description based on wikipedia
9

9) Church of Our Lady (Onze-Lieve-Vrouwekerk) (must see)

Church of Our Lady is a Roman Catholic church and is one of the most important and oldest religious buildings in the city. The oldest walls of the church date back to 1000 AD, but the majority of the church was erected in the 12th century. The building is an ideal example of Romanesque architecture. Its miraculous 15th-century statue of Our Lady attracts people from all over the world. Inside, the church has sculptures, capitals and reliefs, some of which date back to the 12th century.
Image by Beckstet on Wikimedia under Creative Commons License.
10

Helpoort, or Hell's Gate, is the oldest city gate in the country. It got its name due to the fact that prisoners were kept in its tower. Construction of the gate, commissioned by Henry I, began in 1229; it is a part of the First City Walls and served as the southeastern entrance to the city. When the Second City Walls were constructed in the 15th century, the gate was no longer needed as an entrance to the city. Over the years, it served as a residence, storage space and workshop. Today the gate houses a museum dedicated to the history of Maastricht's fortifications. You can visit daily from 12:30 p.m. to 4:30 p.m.
Image by Vijverln on Wikimedia under Creative Commons License.
11

De Hoeg Brögk (Hoge Brug) is a bicycle and pedestrian bridge over the River Maas. It opened in 2003 to connect the Old City of Maastrciht and the Ceramique district. The bridge was designed by architect René Greisch. This steel arch bridge is 261 m long, 7.20 m wide and 10 m tall. The bridge starts at City Park on the left bank of the River Maas and ends at Square 1992 on the right bank.
Image by Hermann Luyken on Wikimedia under Creative Commons License.
12

Pieke oet de Stokstraot is one of the most famous and interesting monuments in Maastricht. It depicts a boy sitting on a wall with his dog Maoke and selling cigarettes to passers-by. Pieke and his dog are two characters from a novel by Bèr Hollewijn. Pieke lived on Stoksstraat at a time when the city suffered from great poverty. The piece was designed by R. van Kesteren and created by sculptor Nicolas Van Ronk Stein. It was unveiled in 1996.
Image by Gouwenaar on Wikimedia under Creative Commons License.
13

Sint Servaasbrug is an arched stone footbridge across the Meuse River in Maastricht. It is named after Saint Servatius, the first bishop of Maastricht, and (despite being largely rebuilt after World War II) it has been called the oldest bridge in the Netherlands. The Sint Servaasbrug connects pedestrian traffic from the Binnenstad district of Maastricht on the west bank of the Meuse to the Wyck district on the east bank.

The bridge is made of limestone, and in its current configuration it is 160 metres (525 ft) long and 9 metres (30 ft) wide. Its seven arches each span approximately 12 metres (39 ft), and are supported by seven piers. A separate steel draw bridge with a span of 54.5 metres (178 ft 10 in) connects the east end of the bridge to the east bank of the river.

Image by Saturn V on Wikimedia under Creative Commons License.
Sight description based on wikipedia
14

Grote Staat is Maastricht's main shopping street and home to shops such as C&A, Hema, Douglas, the former V&D and smaller shops such as Manfield, Jamin, etc. At one end of the street, you will find Maastricht's Tourist Information Office (VVV in Dutch) while the other end of the street leads you to the Vrijthof Square.
Image by Richard Barrett-Small on Flickr under Creative Commons License.