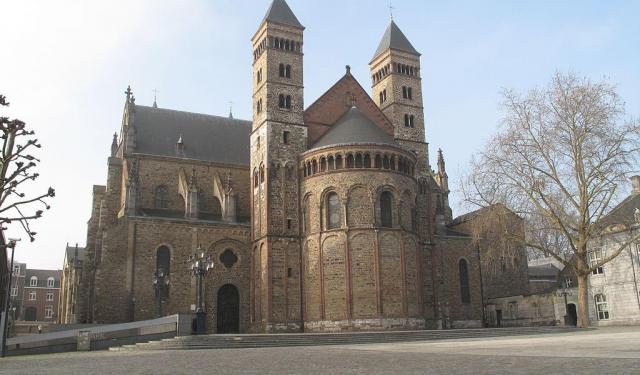 Image by Michielverbeek on Wikimedia under Creative Commons License.

Maastricht is one of the oldest cities in the Netherlands and has many beautiful and significant religious buildings dating from the 12th century onwards. Majestic cathedrals, old abbeys and charming chapels attract people with their grandiose architecture, history and spiritual atmosphere. Take this tour to discover Maastricht's most notable churches and abbeys.
How it works: Download the app "GPSmyCity: Walks in 1K+ Cities" from iTunes App Store or Google Play to your mobile phone or tablet. The app turns your mobile device into a personal tour guide and its built-in GPS navigation functions guide you from one tour stop to next. The app works offline, so no data plan is needed when traveling abroad.

This mid-sized religious building is a chapel built as a part of the Nieuwenhof convent. It was erected six centuries ago within Maastricht's fortified walls. The octagonal chapel, designed in the Classical style, has white walls with a tall glass window on each side. The chapel is located within walking distance from the bank of the River Maas.
Image by Otter on Wikimedia under Creative Commons License.
2

Waalse Kerk is a Calvinist Reformed church, also known as French Church, which was built between 1732 and 1733 by Belgian architect Nicolas Comhaire. It is a simple Baroque-style brick building. The church has a rectangular tower with a cupola at the front. It is topped with ridge turrets with an onion-shaped spire. Inside there is a Louis XIV pulpit and benches and an organ made in 1743 by Th. Weidtmann. Today there are two parishes that use the church: the Dutch Reformed Church that holds weekly worship services and the Walloon Church that holds monthly services. Waalse Kerk is situated opposite Minderbroederskerk.
Image by Otter on Wikimedia under Creative Commons License.
3

Eerste Minderbroederskerk translates to First Franciscan Friars’ Church. It dates back to the 13th century and is a fine example of Maastricht's medieval religious architecture. Its Gothic facade is similar to Dominican Church’s. Years ago, Franciscans were driven out of the city and the church was closed. The furniture, altars, pulpit and organ were publicly sold. The church then served as a cantonment building, and today it houses a regional archive. The Second Franciscan Friars’ Church was built in the 17th century.
Image by Kleon3 on Wikimedia under Creative Commons License.
4

4) Church of Our Lady (Onze-Lieve-Vrouwekerk) (must see)

Church of Our Lady is a Roman Catholic church and is one of the most important and oldest religious buildings in the city. The oldest walls of the church date back to 1000 AD, but the majority of the church was erected in the 12th century. The building is an ideal example of Romanesque architecture. Its miraculous 15th-century statue of Our Lady attracts people from all over the world. Inside, the church has sculptures, capitals and reliefs, some of which date back to the 12th century.
Image by Beckstet on Wikimedia under Creative Commons License.
5

St. Servatius, also known as St. Servaas Church, is the most famous religious building in Maastricht. It was built on the site of St. Servatius’ grave. The building’s architectural style is Romanesque but some Gothic elements were added later. The church is located at Vrijthof Square and was erected between the 11th and 13th centuries. Its Bergportaal, built in the 13th century, was the first Gothic construction in the city. It also has a Gothic tower, which was constructed in the 16th century. The interior is richly adorned and is worth seeing.
Image by Michielverbeek on Wikimedia under Creative Commons License.
6

Tweede Minderbroederskerk, also known as Second Franciscan Church, is located in the center of the city. It dates from the beginning of the 18th century. After Franciscans returned to Maastricht, they decided to build a second church. The first Franciscan church had been built in the 13th century. The church is no longer in operation, and today the building is owned by the University of Maastricht.
Image by Sander Spek on Wikimedia under Creative Commons License.
7

Kruisherenklooster, also known as the Crutched Friar, is a former monastery dating back to the 15th century. It was built in the Gothic style and has a beautiful courtyard surrounded by three walls of the monastery and one wall of the church. It was renovated in the 19th century by architect Cuijpers. During the French Revolution it was used as a garrison, bakery and arsenal. Today it houses a luxurious hotel.
Image by Mark Ahsmann on Wikimedia under Creative Commons License.