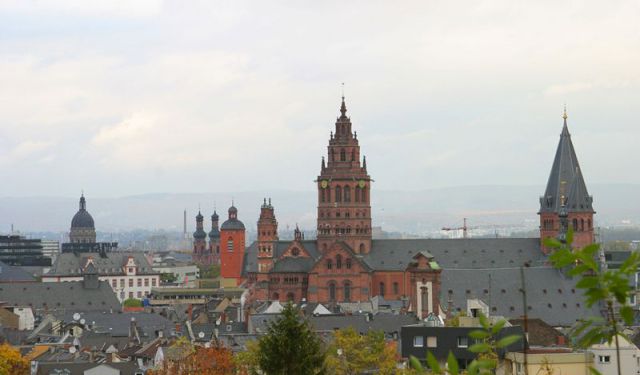 Image by Martin Bahmann on Wikimedia under Creative Commons License.

Mainz architecture is very impressive due to its originality and variety of styles. Inside the city, several buildings date back to the 12th century and medieval times. Despite the devastating effects of World War II, these buildings have also survived and are cherished today by many.
How it works: Download the app "GPSmyCity: Walks in 1K+ Cities" from iTunes App Store or Google Play to your mobile phone or tablet. The app turns your mobile device into a personal tour guide and its built-in GPS navigation functions guide you from one tour stop to next. The app works offline, so no data plan is needed when traveling abroad.

The Theodor Heuss Bridge is an arch bridge over the Rhine River connecting the Mainz-Kastel district of Wiesbaden, capital of state Hesseand the Rhineland-Palatinate state capital Mainz. The main span of the bridge is 102.94 meters (338 ft) long. It was named for German statesman Theodor Heuss. The Romans had built a bridge in this region in 27 AD, while the first arch bridge was inaugurated on 30 May 1885. Its construction costs of 3.6 million gold marks were recouped through tolls within three years although tolls continued to be levied until 1912. The bridge was widened from 1931 to 1934 but was destroyed on March 17, 1945 by German military engineers at the end of the Second World War. It was rebuilt in the years 1948 to 1950 and partially reconstructed between 1992 and 1995.
Image by Heidas on Wikimedia under Creative Commons License.
Sight description based on wikipedia
2

The Deutschhaus is the seat of the Rhineland-Palatinate Landtag in Mainz. The baroque palace was built from 1729-1740 for Franz Ludwig von Pfalz-Neuburg, Prince-elector and Archbishop of Mainz 1729-1732. The building was constructed in a style influenced by French Baroque architecture. It consists of a main building and two pavilions around a central court. One of the pavilions contained a chapel with frescoes by Christoph Thomas Scheffler. During World War II, the building was heavily damaged. Reconstruction was completed in 1951. The new building has been used as plenary building of the Landtag ever since.
Image by Pedelecs on Wikimedia under Creative Commons License.
Sight description based on wikipedia
3

The Jüngerer Dalberger Hof was completed in 1718. It was built by lords of Dalberg to replace the no longer befitting Elder Dalberger Hof. The building was constructed in Rhine Franconian Baroque style. During the Second World War it was damaged and later reconstructed. The palace features beautiful architectural elements in its façade with a Dalberger emblem on the portal. The emblem is framed by a magnificent cartouche, two flower garlands on the both sides and two little cherubs sitting and holding them.
Image by Mylius on Wikimedia under Creative Commons License.
4

Mainz Cathedral or St. Martin's Cathedral is located near the historical center and pedestrianized market square of the city. This 1000 year-old Roman Catholic cathedral is the site of the Episcopal see of the Bishop of Mainz. Mainz Cathedral is predominantly Romanesque in style, but later exterior additions over many centuries have resulted in the appearance of various architectural influences seen today. The first post-Romanesque addition to the cathedral was the western rood screen. This was done in the Gothic style at the time of the western renovations. Following this example, the intersect area was heavily renovated in the next few centuries in the Gothic style. The interior of the cathedral houses tombs and funerary monuments of former powerful Electoral-prince-archbishops, or Kurfürst-Erzbischöfe, of the diocese and contains religious works of art spanning a millennium. The cathedral also has a central courtyard and statues of Saint Boniface and The Madonna on its grounds.
Image by LH Wong on Flickr under Creative Commons License.
Sight description based on wikipedia
5

As previously mentioned, Mainz's theatrical life has a very long and prosperous history, clearly evident at The State Theatre. The theatre has received international recognition and offers a wide range of programs, including opera, orchestra, drama and ballet performances which equal approximately 500 performances a year.
Image by Florian Bieser on Flickr under Creative Commons License.
6

Kirschgarten is one of the most picturesque corners in old town Mainz, as several half-timbered houses are placed on parallel lines. In 1976-1979 Kirschgarten was renovated extensively. Zum Aschaffenberg, located in the Kirschgarten, is the oldest half-timbered house of the city and dates back to 1500. There is also a famous fountain, called the Virgin Mary.
Image by Theodoranian on Wikimedia under Creative Commons License.
7

The Osteiner Hof is one of several Baroque-era palatial mansions along Schillerplatz square in the city of Mainz. The mansion, along the southern edge of the square, was built in 1747-1752. Characteristic features for this building are the three round protrusions (risalits) at the front entrance and on the two corners. The building is lavishly decorated; for instance, the windows are framed by rococo-style cartouches symbolising the elements of air, earth and water. The classical gods Diana and Mars are shown on the cartouches framing the balcony doors.

In 1798 mansion became the seat of a newly-created département of France, Mont-Tonnerre. The Osteiner Hof plays an important part in the local carnival traditions. Every year, on 11 November at 11 past 11, the start of the carnival season is proclaimed from the balcony of the mansion.

Image by Berthold Werner on Wikimedia under Creative Commons License.
Sight description based on wikipedia
8

The CinéMayence is located in Maison de France, on Baroque Schönborner Court. The building itself is one of historical value, as it was constructed in the 17th century and is an fantastic example of grand architecture. The cinema screened at CinéMayence is generally international films and cinema classics. The program can range from silent films with live piano accompaniment to the presentation of digital media.
Image by Martin Bahmann on Wikimedia under Creative Commons License.
9

The current station was built as a central station from 1882 to 1884 as part of the expansion of the city after the Franco-Prussian War. The Mainz architect Philipp Johann Berdellé (1838-1903) created the station's entrance building in bright Flonheim sandstone in Italian neo-Renaissance with baroque and neoclassical elements. A jutting central section is framed by two lower side wings with arcades, which end in risalits. The building was opened ceremoniously on October 15, 1884. Berdellé set the emphasis of the graphic decorations on the entrances of the central building. Allegorical representations refer to the function of the building. On both sides of the entrance reliefs display putti at play, to indicate the way for arrivals and departures.
Image by Florian Weyl on Wikimedia under Creative Commons License.
Sight description based on wikipedia

Mainz, one of the oldest German cities, located on the Rhine River, is famous for its distinctive deep red sandstone buildings, such as the Romanesque Mainz Cathedral, Baroque style Augustinerkirche, Mainz Staatstheater and others. Architecture and history buffs will also take interest in the local half-timbered houses and medieval market squares; some buildings spanning back as far as the Roman...  view more

Mainz welcomes visitors of all ages. The city is home to several sights, museums, parks, entertainment centers, shops and cafés that are appropriate for both adults and children. Take this family friendly tour to discover rare dolls, classical games, taste typical German handmade pastry, learn history of the city, as well as taste your creativity at Mainz workshops.

Mainz specialty shops are must-visit when in the area and searching for the hottest as well as most unique spot in the city. Thankfully, Mainz provides a large number of these outlets and are well worth your time. Take some time out of your vacation to enjoy all that Mainz has to offer.

Mainz boasts a number of churches and parishes which are worth visiting. The city’s oldest churches are especially impressive due to their grand architecture as the exterior and interior of the churches are built in Baroque, Gothic, Rococo, Classical and Renaissance styles. Not only that, but splendid frescoes, old organs, beautiful glass windows and rich high altars only add to the pleasure.

While Mainz is not a very large city, the area is still home to several fantastic museums. Here you may explore Germany's numerous historical, cultural and natural collections - carefully displayed in one of the many museums such as Kupferberg, Fastnachtsmuseum, Museum of Natural History and Landesmuseum.

Mainz offers a unique cultural experience that dates back all the way back to the beginning. Every epoch of Mainz history has thankfully been recorded through impressive art and is preserved today in numerous world famous museums and art centers. Theatre is another phenomenal example of Mainz culture, and evident through the plethora of plays, opera, and ballet.