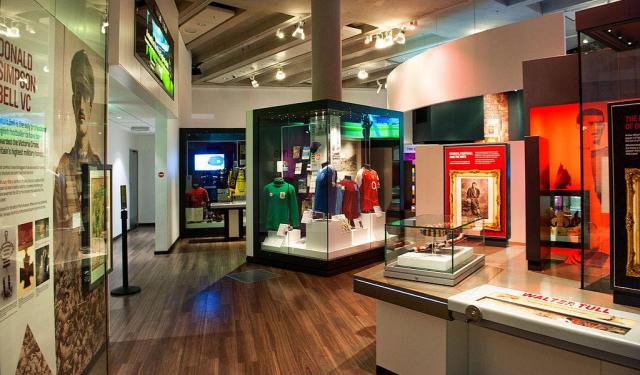 Filled with history and important in many domains including industry, economy and culture, Manchester is the city of heritage that is an attraction itself. If you’re interested in learning interesting facts about the city, take this self guided tour and have your questions answered.
Image Courtesy of Wikimedia and tatchie.
How it works: Download the app "GPSmyCity: Walks in 1K+ Cities" from iTunes App Store or Google Play to your mobile phone or tablet. The app turns your mobile device into a personal tour guide and its built-in GPS navigation functions guide you from one tour stop to next. The app works offline, so no data plan is needed when traveling abroad.

1) Museum of Science and Industry (must see)

The Museum of Science and Industry is located on Liverpool Road, in Manchester’s Castlefield district, south west of the city centre. The museum covers a seven acre site and houses displays on various aspects of the scientific and technological advances of the last two centuries. The history of transportation in Manchester and the UK is heavily featured within the museum. Combined with the nearby Public Transport Museum, these exhibits make Manchester a big draw for transport enthusiasts. The museum boasts an impressive collection of aviation and space travel exhibits, housed in the Air and Space Hall. These include a Morphis simulator and several restored early 20th century aeroplanes produced by local manufacturer, the Avro Company.

The museum, which also houses a functioning steam train and several restored locomotives. The museum is free to visit, although there may be a small admission charge for special exhibitions. The museum is accessible for wheelchair users, and the museum site has a number of amenities, including parking, a café and a gift shop.

Image Courtesy of Wikimedia and Lmno.
2

The People’s History Museum is a museum space devoted to the working people of Britain, with particular focus on local history. A range of occasional exhibits focus on different aspects of local working life – with a recent exhibition displaying artwork and animations inspired by the city’s famous cotton industry. The museum has one of the finest collections of political paraphernalia in the UK, from its beginnings as a Trade Union and Labour Party museum in the 1970s. The museum houses 1500 political posters, dating from the 18th and 19th centuries and featuring rare propaganda posters originating from the Spanish Civil War.

The People’s History Museum is located on Left Bank, adjacent to the River Irwell, which divides the cities of Salford and Manchester. Geographically, the museum is actually on the East bank of the river, in the Spinningfields area of Manchester. The museum is fully wheelchair accessible, and offers support for visitors with sensory impairment. The museum site features a shop and café bar, and offers a range of family friendly amenities, including a picnic area, baby changing facilities and hands on activities for all ages.

The National Football Museum is a museum at the Urbis building in Manchester city centre, founded to preserve, conserve and interpret important collections of football memorabilia. The museum was originally in Deepdale, Preston, Lancashire, but moved to Manchester in 2012. The National Football Museum holds a huge collection of football exhibits and memorabilia in a four-story building, and is the largest museum dedicated to the game of football in the world.

Here you will learn how football became the pass time of our lives. There are hundreds of fascinating photographs, memorable videos, and historic objects on display, including shirts worn by football greats such as Pele, Stanley Matthews, Diego Maradona and others.

The museum is very well-curated for visitors for learning the history of football as a game and the story behind the World Cup. For fun stuff, there is a penalty shootout zone for kids, so they can have hands-on, or more appropriately feet-on, experience of trying a penalty kick.

If you are football fan, the National Football Museum is a must-visit experience when in Manchester.

Manchester Jewish Museum is situated in Cheetham Hill, a diverse inner suburb located just north of the city centre. Formerly a Spanish and Portuguese synagogue, the building fell out of use as a place of worship when the area’s Jewish population migrated into Manchester’s outer suburbs. The building opened as a museum for Manchester’s Jewish population in 1984. It was created by local architect Edward Salomons in 1874, and was built in the Moorish Revival style. A homage to the architecture found in Moorish Spain, the decorative frontage of the building was particularly appropriate, given the Iberian heritage of many of the synagogue’s congregation.

The museum is open from 10am until 4pm Sunday through Thursday, except Friday it's open until 1 pm. It is contained entirely within the fully restored former synagogue, and houses a collection of photographs and artifacts covering the history of Jewish life in the city. There are regular talks and events covering the history of Judaism in Europe, and the museum plays a key role in promoting local remembrance of the Holocaust. Manchester Jewish Museum is the only Jewish museum in the UK outside of London, and aims to promote the customs and traditions of the local Jewish population by offering visits to other local Jewish centres, as well as Jewish food and community events.
Image Courtesy of Wikimedia and Rept0n1x.
5

Greater Manchester, the area encompassing Manchester and its suburbs, has a rich history of providing effective public transport to its population. As a rapidly growing conurbation comprised of Manchester and its many satellite towns, the area has had to overcome a number of transport problems in the 20th century. The city’s public transport is comprised of rail services, an extensive bus network, and the Metrolink tram system, which runs on road and rail.

The latter two services are extensively covered by the museum, which houses an impressive collection of restored omnibuses from across the region. The museum also has a range of trams and trolley buses from the turn of the 20th century on display, as part of a walking tour of Mancunian transport, taking in everything from Victorian horse drawn buses to the modern Metrolink tram vehicles.

The museum, which is fully wheelchair accessible, is located adjacent to Queens Road Bus Depot, on Cheetham Hill Road, about a mile north of Manchester city centre. Woodlands Road Metrolink stop is a short walk away. Admission is £4.00 for adults, with concessions available. Children under 16 can visit for free.