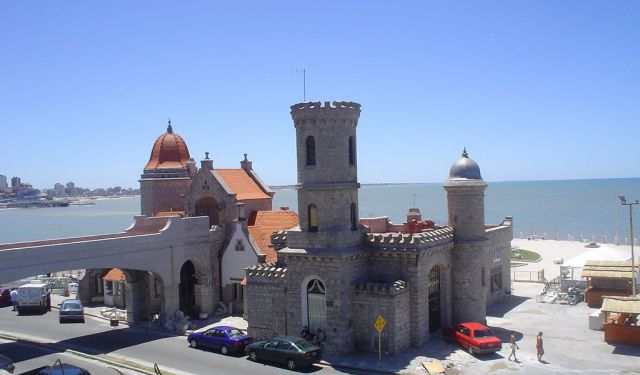 Known primarily for its stunning beaches and surf breaks, Mar del Plata is also an architecture-rich destination set on the Argentinean Atlantic coast. Some of the city's elegant late-19th-early-20th-century buildings now house museums, theaters, hotels and other attractions. If you have a taste for architecture, follow this walk and enjoy the alternate side of Mar del Plata resort!
How it works: Download the app "GPSmyCity: Walks in 1K+ Cities" from iTunes App Store or Google Play to your mobile phone or tablet. The app turns your mobile device into a personal tour guide and its built-in GPS navigation functions guide you from one tour stop to next. The app works offline, so no data plan is needed when traveling abroad.

Founded in 1892 and officially opened in 1924, the Teatro Colón is notable for its unique architecture and the richness of its performances. Situated near Plaza San Martin, the theater was designed by architect A. Pascual and is considered an original work of huge importance to the history of Mar del Plata. The building is an example of Spanish architecture with neo-colonial interiors. The exterior facade is decorated with Gothic elements and Renaissance arches and is dominated by a central spire of old stone and two low towers. It also features Gothic windows formed by arches of graved stone and Renaissance balustrades. The theatre is home to important cultural events throughout the year and other theatrical activities with famous artists from Mar del Plata.
Image by Aleposta on Wikimedia under Creative Commons License.
2

Situated in front of the well-known Plaza San Martin, the temple was established in 1905, but the foundation was laid in 1893 to honor Saint Peter, and is considered the third-largest church in the country. Designed by architect P. Benoit, the chapel was built in neo-gothic architectural style. The exciting exterior features chaotic lines in the center of the tower, numerous turrets, arches and columns, and wonderful stained glass windows which were brought from France. The church interior is known for its ceiling made of colored terracotta, the mosaic floor, the main chandelier and the Italian altar created the same year as the construction of the chapel upon which can be seen religious relics.
Image by fernandosouza on Flickr under Creative Commons License.
3

Situated on Cordoba Avenue, the Palacio Árabe has a gorgeous Neo-Arabic architectural style. Founded in 1948, it is notable for its lovely façade elements, which combines different architectural ornaments and a minaret at the top of the building. Created by the architect V. Brodsky, the complex belonged first to J. Galli and today is a landmark and a meeting point for both locals and tourists.
Image by elizajanecurtis on Flickr under Creative Commons License.
4

Bustillo's twin buildings were designed in an eclectic style, but with reminiscences of French Neoclassical architecture. The buildings were clad in brick and quartzite, and topped with a slate mansard. The grand entrance of the Central Casino, marked by a canopy, was located on Patricio Peralta Ramos Avenue, but was moved to the seashore esplanade following its 2007 refurbishment. Gaming space includes a main room overlooking the Atlantic Ocean, as well as rooms for high rollers (140 tables, including blackjack, baccarat, craps, and roulette) and for slot machines (630). The casino welcomes around 12,000 players per evening during the summer tourist season, with as many as 18,000 daily during January weekends.

Image by Planmdq on Wikimedia under Creative Commons License.
Sight description based on wikipedia
5

Located in front of Plaza Colon, the Palacio Eden was one of the first skyscrapers in the city and one of the most representative urban landscapes in the country. Dating back to 1958, the building features a lovely vestibule decorated with pottery and was designed by the architect J. A. Dompe in a classic style which characterized the town for a long period of time. The modern edifice faces the picturesque Rambla de Mar del Plata and the sea with Playa Bristol.
Image by fernandosouza on Flickr under Creative Commons License.
6

Located downtown Mar del Plata, the Terminal de Micros building is of great interest to locals and tourists. Designed by architect J. Dormal, the edifice provides an imposing façade, especially the decorative elements, the clock tower, the arch and the two beautiful domes. The front of the edifice was repeatedly modified, and today it has a more modern and unusual look. Originally, the front designs of the building could be seen backwards but currently they are on Alberti Avenue, facing the center of the city. It features a central vestibule, shops, platforms, restaurant and different rooms for women.
Image by Ojota on Flickr under Creative Commons License.
7

Established in January 1943, the Torre Tanque is a stunning landmark with Nordic-style picturesque ornaments. Situated on the highest hill of Stella Maris, the building features a house, a ring-shaped staircase with 194 steps, a lift and a huge tank with water which supplies the north part of the town. Designed by architect C. Lange, the architectural heritage building offers a panoramic view not only of the sea but also of the surrounding areas.
Image by Tanozzo on Flickr under Creative Commons License.
8

The imposing Capilla Stella Maris was built in 1908 and is interesting due to its beautiful façade and interior, designed by O. Basualdo. Located at the intersection of Vialmonte and Almirante Brown Streets, the chapel features a neo-gothic architectural style and unique ornaments. Originally, the temple was a school-church and here began worship in this country. At the top of the chapel, visitors can admire the beautiful sculpture which represents the patron saint, as well as the interior elements, especially the altar symbolizing the open sea on which Stella Maris floats. All the religious items found inside were donated by various people.
Image by Dario Alpern on Wikimedia under Creative Commons License.
9

The oceanfront city was given its first municipal museum of fine art in 1938, when the facility was inaugurated in the Mar del Plata City Hall. The museum gathered a collection of mainly modern art in subsequent decades, and in particular works by local realist painter and muralist Juan Carlos Castagnino. The museum's collections feature nearly 600 paintings, sculptures, lithographs, photographs and other works, including those by Argentine artists Antonio Berni, Alberto Bruzzone, Prilidiano Pueyrredón, Luis Seoane, Raúl Soldi, and Juan Carlos Castagnino, for whom the museum was renamed in 1982, and of whom the museum houses 138 works.

Image by eMaringolo on Flickr under Creative Commons License.
Sight description based on wikipedia
10

The artistic Torreón del Monje was inaugurated in February 1904 and is done in a medieval architectural style. Situated in Punta Piedras, the name comes from the legend of a hero who lost his love and decided to become a monk. The old building features a picturesque view of Mar del Plata and Bristol Beach in the background. It provides a hall for parties, tea lounge, summer terrace and a restaurant. Today, it is one of the most imposing buildings in the city and a huge gastronomic center.
Image by Dario Alpern on Wikimedia under Creative Commons License.