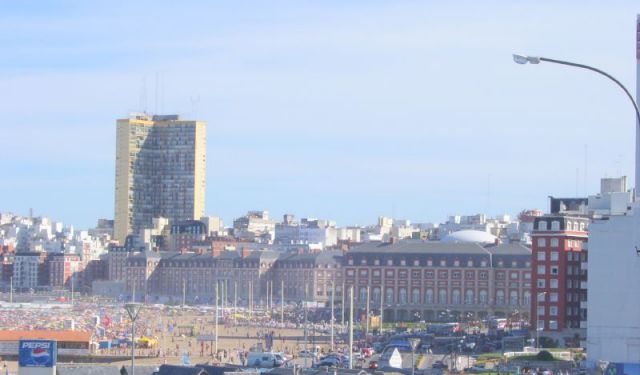 Image by Ojota on Flickr under Creative Commons License.

Mar Del Plata is a well-known tourist city. It offers a picturesque view of the history of its people through its interesting historic sites, stunning architecture, art and landmarks. Here is a list of Mar del Plata's most prominent landmarks that you should take into consideration in your walking tour.
How it works: Download the app "GPSmyCity: Walks in 1K+ Cities" from iTunes App Store or Google Play to your mobile phone or tablet. The app turns your mobile device into a personal tour guide and its built-in GPS navigation functions guide you from one tour stop to next. The app works offline, so no data plan is needed when traveling abroad.

Founded in 1910 and established in 1912, the Asilo Saturnino Unzué is one of the most visited landmarks in Mar del Plata. Designed by L. Dujarric, the edifice presents a Byzantine Romanesque style and Italian elements. Originally, it served as a refuge and hospital for women, but today it houses a cultural and social institution and a center for art exhibitions. The building has the form of “H,” which includes two floors, a chapel, a large park, a fountain, an oratory and a big clock. Inside, visitors can see the different religious sculptures, an altar, beautiful architectural ornaments on the walls and artistic beauties that this building offers.
Image by Banfield on Wikimedia under Creative Commons License.
2

Inaugurated in 1985, this architectural complex includes a system of concrete columns and 5 spas linked in a linear form. Some surfaces are covered with bricks. Situated on the coastal front of the town, this project is considered a link between Mar del Plata and the beach, or an avenue which leads to the sea. Designed by architect C. Testa, the complex also links different shops and nightclubs. Visitors will find real nature in different situations.
Image by Pruxo on Wikimedia under Creative Commons License.
3

Inaugurated in 1938, the Palacio Municipal is in a Neo-Renaissance architectural style and recalls the elements of the Florentine palaces. Designed by architect A. Bustillo, the edifice has a clear and simple form, with a wonderful façade and a tower of 40 meters. Originally, the City Hall was founded in 1890 and underwent many modifications, but the current renovated building is still situated on the same place. In 1991, the palace was listed as landmark of historical interest.
Image by Ojota on Flickr under Creative Commons License.
4

Situated on Cordoba Avenue, the Palacio Árabe has a gorgeous Neo-Arabic architectural style. Founded in 1948, it is notable for its lovely façade elements, which combines different architectural ornaments and a minaret at the top of the building. Created by the architect V. Brodsky, the complex belonged first to J. Galli and today is a landmark and a meeting point for both locals and tourists.
Image by elizajanecurtis on Flickr under Creative Commons License.
5

Bustillo's twin buildings were designed in an eclectic style, but with reminiscences of French Neoclassical architecture. The buildings were clad in brick and quartzite, and topped with a slate mansard. The grand entrance of the Central Casino, marked by a canopy, was located on Patricio Peralta Ramos Avenue, but was moved to the seashore esplanade following its 2007 refurbishment. Gaming space includes a main room overlooking the Atlantic Ocean, as well as rooms for high rollers (140 tables, including blackjack, baccarat, craps, and roulette) and for slot machines (630). The casino welcomes around 12,000 players per evening during the summer tourist season, with as many as 18,000 daily during January weekends.

Image by Planmdq on Wikimedia under Creative Commons License.
Sight description based on wikipedia
6

The NH Gran Hotel Provincial is a five star establishment in Mar del Plata. It is one of a pair of twin buildings designed by architect Alejandro Bustillo. Inspired by seafront Hotel du Palais in Biarritz, France. Completed in 1948, the 500-room establishment was inaugurated on February 18, 1950, and was long the largest in Argentina.

The operation of the publicly-owned hotel was privatized under licence to the local Empresa Hotelera Americana in the early 1990s, though ongoing losses led to the agreement's rescission at the end of 1998; unable to finance its operation, the province kept the hotel shuttered from that date. The province obtained an investment bid from the Madrid-based NH Hotels Group for the Gran Provincial's reopening, in April 2008. Following refurbishment works directed by local architect Alejandro Novakovsky and totalling nearly US$30 million, the hotel was re-inaugurated on February 8, 2009. Its 77,500 square metres (834,000 sq ft) of floor space includes 469 rooms and 12 suites, as well as a convention center.

Image by DagosNavy on Wikimedia under Creative Commons License.
Sight description based on wikipedia
7

The artistic Torreón del Monje was inaugurated in February 1904 and is done in a medieval architectural style. Situated in Punta Piedras, the name comes from the legend of a hero who lost his love and decided to become a monk. The old building features a picturesque view of Mar del Plata and Bristol Beach in the background. It provides a hall for parties, tea lounge, summer terrace and a restaurant. Today, it is one of the most imposing buildings in the city and a huge gastronomic center.
Image by Dario Alpern on Wikimedia under Creative Commons License.
8

Established in January 1943, the Torre Tanque is a stunning landmark with Nordic-style picturesque ornaments. Situated on the highest hill of Stella Maris, the building features a house, a ring-shaped staircase with 194 steps, a lift and a huge tank with water which supplies the north part of the town. Designed by architect C. Lange, the architectural heritage building offers a panoramic view not only of the sea but also of the surrounding areas.
Image by Tanozzo on Flickr under Creative Commons License.
9

Situated close to Playa Varese and not far from the center of the city, the Mirador Cabo Corrientes is a grandiose complex which attracts visitors’ eyes. Designed by artist Deborah di Veroli, the residential complex has been also called “four fingers” because of its irregular form. The building provides beautiful gardens, a park, a swimming pool and some entertainment areas. In 2004, the building’s exterior was colored in blue and white, imitating another building in Mar del Plata.
Image by Esther Rodríguez on Flickr under Creative Commons License.

Mar del Plata offers tourists an excellent opportunity for relaxation through its spas, beaches and amusement complexes which can accommodate visitors' preferences and budgets. As one of most beautiful towns, its numerous parks, reservations, famous squares and other green spaces with colorful flora give visitors a stunning landscape. Take the following tour to discover some great stops for...  view more