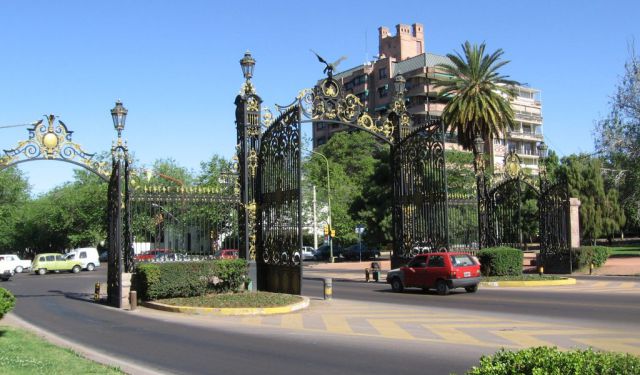 Image by ActiveSteve on Flickr under Creative Commons License.

General San Martín Park is one of the most popular sights in Mendoza city. It attracts hundreds of tourists every day, not only because of the attractions found within the park, but also thanks to the harmonious structure of its roads and alleys, that turn every minute spent in the park into a pure pleasure. During this walking tour, you will visit Cuyo University museums, Mendoza Zoological Park, as well as the marvelous Monument to the Army of the Andes.
How it works: Download the app "GPSmyCity: Walks in 1K+ Cities" from iTunes App Store or Google Play to your mobile phone or tablet. The app turns your mobile device into a personal tour guide and its built-in GPS navigation functions guide you from one tour stop to next. The app works offline, so no data plan is needed when traveling abroad.

The Archaeological Museum is located in the Cuyo University Center, at the Philosophy and Humanities Faculty (Facultad de Filosofía y Letras). The museum features archeological materials of the Old and New world history. It also concentrates on the history of the national territories, especially the Northwest, Cuyo and Patagonia. The Archaeological Museum is famous for exhibiting the mummy layette, found in the Aconcagua. The separate part of the exhibition is dedicated to the ethnographic materials from the northwest part of the country, as well as the history of the Cuyo folk.
Image by Vanesa Oliva under Creative Commons License.
2

Museo Universitario de Arte is based at the Faculty of Arts and Design (Facultad de Artes y Diseño) of the Universidad Nacional de Cuyo. The heritage of the museum consists of more than 800 works of art, including paintings, prints and sculptures. The museum exhibition is mainly devoted to Argentinian artists: Roberto Azzoni, Lorenzo Dominguez, Luis Quesada, Hector Nieto, and others. The Art Museum is also famous for its beautiful mural paintings.
Image by Luis Miró Quesada on Flickr under Creative Commons License.
3

The Parque Aborigen (Aboriginal Park) was inaugurated in 1933. The park founders aimed to bring together elements of indigenous flora, like creosote bush, cactus, broom, and many others. The Parque Aborigen features a work by Argentinian sculptor Luis Perlotti, ”Salute to the Sun”. This sculpture is set to demonstrate the homage to the pre-Columbian American culture. It is made of bronze and depicts a figure of an Indian sitting with his arms raised in worship to the sun.
Image by Daidaros on Flickr under Creative Commons License.
4

The Mendoza Zoological Park is the only zoo in Mendoza Province. It covers 48 hectares (120 acres) and has about 1,100 animals. The zoo was established in 1903 by the landscape architect Carlos Thays, who was also commissioned to design the Parque General San Martin. Construction works began the following year, during the government of Emilio Civit. Initially the zoo was located at the current school-home “Eva Peron”. There Carlos Thays constructed a building that would be used as a cage for lions. Ponds and roads were also built later.

The first animals arrived on May 18, 1903 donated by the city of Buenos Aires. The group included a zebu, 6 dogs, 6 guinea pigs and rabbits. New animals (also donated by the city of Buenos Aires) came in 1905 while construction work continued. This time, joined a lion, a bear, two monkeys, two parrots and a blue jay. In 1939 was taken the decision to relocate the zoo. The zoo was placed on the northeast slope of Cerro de la Gloria. Taking inspiration from various zoos around the world, the architect designed semi open enclosures that simulate natural habitats and provide enough space for animals, without bars or cages, just with different levels and building stone walls of the curvature of the hill. The zoo was officially reopened in 1941, covering 40 hectares (99 acres) and including 6.5 kilometres (4.0 mi) of paths and roads.

Image by flekoso on Flickr under Creative Commons License.
Sight description based on wikipedia
5

The Frank Romero Day Amphitheater is the largest amphitheater in Argentina and is since 1963 the site of the annual Fiesta Nacional de la Vendimia (National Grape Harvest Festival). The amphitheater has a capacity of 19.242 places. It was built by one of the most outstanding architects from Mendoza, Daniel Ramos Correas. Originally it was named Amphitheater Cerro de la Gloria and was later renamed in honor of Frank Romero Day who continued and completed the construction of the amphitheater.
Image by Nico Kaiser on Wikimedia under Creative Commons License.
6

6) Monument to the Army of the Andes

Monument to the Army of the Andes sits at the top of the Cerro de la Gloria in General San Martín Park. It was created by the Uruguayan sculptor Juan Manuel Ferrari, who had developed two models and picked the most important aspects from both of them. Ferrari visited the province to choose the place for the monument. When he saw Cerro del Pilar, he exclaimed: “This is my mound!”. In 1913, Cerro del Pilar was renamed to Cerro de la Gloria and construction works began. All the parts of the sculptural composition are made of bronze and have deep symbolical meaning. The main theme of the monument is the exaltation of the liberator. In the center of the composition stands the equestrian statue of General San Martín, accompanied by two groups of Grenadiers on his sides. Three friezes of the monument depict the most remarkable moments of the army's formation. Above all these, rises the allegorical figure of Liberty, wrapped in the country's flag, raising the broken chain, symbolizing independence and freedom. At the base are placed the shields of Argentina, Chile and Peru. The monument was inaugurated in February, 1914, on the 97th anniversary of the Battle of Chacabuco.
Image by Fred Lam on Flickr under Creative Commons License.