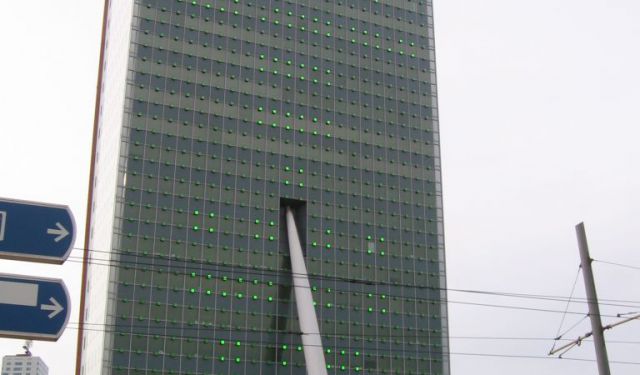 Image by Mw007 on Wikimedia under Creative Commons License.

The Kop van Zuid (Head of the South) area is an old harbor district which has been transformed into a modern city quarter with high-rise buildings. Take our tour to discover the best sights of Kop van Zuid, including Montevideo, the highest building in the Netherlands.
How it works: Download the app "GPSmyCity: Walks in 1K+ Cities" from iTunes App Store or Google Play to your mobile phone or tablet. The app turns your mobile device into a personal tour guide and its built-in GPS navigation functions guide you from one tour stop to next. The app works offline, so no data plan is needed when traveling abroad.

The Spido is a top attraction in Rotterdam as it's one of the best ways to experience all the vitality of this major world port. Here you will have a stunning view of Erasmus Bridge, Hotel New York, steamship Rotterdam, the historic Veerhaven harbour, the Euromast and all the modern ships.
Image by Emvee on Wikimedia under Creative Commons License.
2

The KPN Telecom tower is an icon of Rotterdam. One of many new buildings erected in the city after World War II, KNP Telecom is situated at the end of the Erasmus Bridge. It's a sight not to be missed when visiting the city, especially for its curious design that makes the building looks as if it has been divided into three vertical sections.
Image by sashafatcat on Flickr under Creative Commons License.
3

The Wilhelminakade, or Tower of Numbers, offers a magnificent view over the river and the Erasmus Bridge. It's one of the city's top tourist attractions because visitors can watch the skyline of a developing city unfold from this great vantage point.
Image by Hanhil on Wikimedia under Creative Commons License.
4

World Port Center is a 33-storey, 123.1 m (404 ft) skyscraper in Rotterdam, Netherlands. The tower was commissioned by ING Real Estate Development. As the building stands at the far point of the Wilhelmina pier it is built on, there is an excellent view of the surrounding harbors and city from the higher floors. The building is also an emergency center, designed to deal with potential catastrophes in the port area and act as a coordination center. The World Port Center is an amazing skyscraper that could set a trend for major world buildings in the future. The slim, rounded contours of its facade give it a very dynamic appearance. It's also situated in a much sought-after attractive location in Rotterdam. It boasts a conference center on its top levels, as well as a restaurant and an underground car park.
Image by Robert Jaarsma on Wikimedia under Creative Commons License.
Sight description based on wikipedia
5

The Luxor Theater is an vast, imposing structure that strikes visitors with its rounded shape. Built in 1917 as a musical theater, it withstood the bombings of World War II that destroyed much of the city, and went on to become one of the best-known theaters in the Netherlands.
Image by Wikifrits on Wikimedia under Creative Commons License.
6

Victory Outreach is a Christian denomination in Rotterdam. Since 1967, the church has been striving to deliver Christ's message of hope around the world. Thousands of families and individuals have been involved with the church over the last four decades.
Image by Arghya a.k.a Orgho on Flickr under Creative Commons License.
7

Events at The Theater Zuidplein are centered around the city's cultural diversity. The theater offers a number of gorgeous rooms and foyers that can be utilized separately or joined together. Its main hall is equipped with a large screen and surround sound, also providing for film screenings. Conveniently for tourists, the theater is easily accessible by car and public transport.
Image by Ethan Prater on Flickr under Creative Commons License.
8

The ICF Church Rotterdam is a warm community involving people from all over the world. It's a center for love and compassion, making new contacts and maintaining old friendships. The church offers a range of services for people who want to know more about the deeper mysteries of faith.
Image by David Gestalder on Wikimedia under Creative Commons License.

A Cultural Walk in Rotterdam

Visitors seeking culture will get the utmost pleasure from their trip to Rotterdam. It's a place that is both open to cultural growth and very much in touch with modern cultural trends. Lots of cultural music events and festivals are held in the city each year. Check out our tour of the top cultural attractions in Rotterdam.

Places of Worship in Rotterdam

The name Stadsdriehoek refers to the historic City Triangle of Rotterdam, which dates from the late Middle Ages. The area was bounded by Cool Vest and Schiedamsevest to the west, the Golden Vest to the northeast and the Nieuwe Maas to the south. Take our tour to see the top sights in this beautiful area.