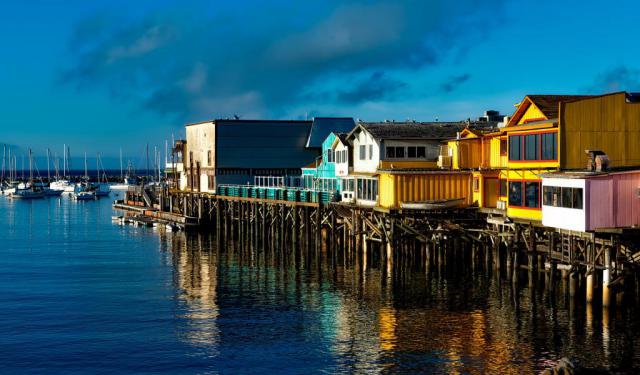 Image by TheConduqtor on Wikimedia under Creative Commons License.

Once (between 1777 and 1849) the capital of California, in recent history Monterey gained fame mostly as the set of John Steinbeck's novels, particularly Cannery Row, a one-time center of the city's sardine-packing industry, which the author immortalized in his eponymous book. Today, the area is a popular thoroughfare filled with gift shops, seafood restaurants and bars occupying the converted factories. Another major local attraction is the Monterey Bay Aquarium, featuring thousands of marine creatures and plants in underwater and interactive exhibits. Follow this orientation walk to explore these and other top attractions of Monterey.
How it works: Download the app "GPSmyCity: Walks in 1K+ Cities" from iTunes App Store or Google Play to your mobile phone or tablet. The app turns your mobile device into a personal tour guide and its built-in GPS navigation functions guide you from one tour stop to next. The app works offline, so no data plan is needed when traveling abroad.

Fisherman's Wharf, or The Old Fisherman's Wharf, was used as an active wholesale fish market into the 1960s, and eventually became a tourist attraction as commercial fishing tapered off in the Monterey area. Fisherman's Wharf was built by the Pacific Coast Steamship Company in 1870 for the loading and unloading of passengers and goods. The wharf was also used by other commercial operations, and the city of Monterey took ownership in 1913. In 1923, while an unusually large shipment of sardines was being loaded on to the S.S. San Antonio, bad weather caused the ship to lean on the wharf, and 132 feet of the wharf collapsed. When the wharf was reconstructed, it was extended by 750 feet.

Fisherman's Wharf is lined with seafood restaurants ranging from casual, open-air clam bars, to formal indoor dining with views of the bay. Along with Cannery Row, Fisherman's Wharf is one of the few areas in Monterey that sells souvenirs, so the restaurants are interspersed with gift shops, jewelry stores, art galleries, and candy shops. Whale watching tours and fishing trips leave from the wharf, and sea lions often sleep on the pilings, buoys, and moored boats in the bay.At the entrance to the wharf is Custom House Plaza, the historical center of Monterey. Here you will find the Custom House, the first government building in California and the location where the United States took Monterey from Mexico in 1846.

Image by Elin B on Flickr under Creative Commons License.
Sight description based on wikipedia
2

Monterey State Historic Park is one of the beautiful city's attractions. It is a historic state park situated in Monterey, California. You can visit not only a variety of historic homes built in the 1800s but also early adobe constructions. The old houses can be accessed daily and the admission to the park is free.
Image by Lisa Andres on Flickr under Creative Commons License.
3

A truly magnificent story! This theater was built by Jack Swan. He was an English sailor who settled in Monterey in 1843. Swan used lumber from a shipwreck to construct this theater in 1845. In 1847 former Army officers convinced Swan to build a small stage. The theater had benches, whale-oil lamps to light up the interiors, special candles for footlights and curtains, that were made of red and blue blankets. Most of the plays were melodramas and a ticket cost $5. In 1906 this theater was bought and donated to the State of California.
Image by d.neuman on Flickr under Creative Commons License.
4

This wonderful construction was opened in 1926. It has a very rare organ with an unusual history. It was very hard to bring it to Monterey, but later is was sold to a collector. The present organ is an exact copy of the original, and it is considered to be one of the best organs in the USA. So many stars of the past performed here: Morte Mortensen, and, later, Pauline Hellam, "Bud" Buttle, Danny Danzigger, Harold Wright, and Edward C. Hopkins. It is a rare occasion to hear, see and touch the music and cultural history of California right here in Monterey.
Image by BWChicago on Flickr under Creative Commons License.
5


Image by peterme on Flickr under Creative Commons License.
Sight description based on wikipedia
6

The Cathedral of San Carlos Borromeo, or Royal Presidio Chapel, is a Roman Catholic cathedral, and is the oldest continuously operating parish and the oldest stone building in California. It was built in 1794 making it the oldest (and smallest) serving cathedral along with St. Louis Cathedral in New Orleans, Louisiana. It is the only existing presidio chapel in California and the only existing building in the original Monterey Presidio.

The church was founded by the Franciscan Father Junípero Serra as the chapel of Mission San Carlos Borromeo de Carmelo on June 3, 1770. In May, 1771, the viceroy approved Serra's petition to relocate the mission away from the Presidio to its current location near the mouth of the Carmel River and the present-day town of Carmel-by-the-Sea. The new mission was named Mission San Carlos Borromeo de Carmelo.

When the mission was moved, the existing wood and adobe building became the San Jose Chapel for the Presidio of Monterey. Monterey became the capital of the Province of Californias in 1777 and the chapel was renamed the Royal Presidio Chapel. The original church was destroyed by fire in 1789 and was replaced by the present sandstone structure. It was completed in 1794 by Indian labor in the form of a Latin Cross. The Royal Presidio Chapel is the first stone building in California and reflects the exquisite Spanish Colonial style of the late 18th century.
Image by Jojojoe on Wikimedia under Creative Commons License.
Sight description based on wikipedia
7

7) Dennis the Menace Park (must see)

Familiar with the Dennis the Menace movie? Great! This park might be the best part of your trip, especially if you have your precious children with you. Hours and hours of joy, sliding, train and maze fun - for the whole family. The entire park is oriented to please everyone, from toddlers to elders. Cherish the moments of open-air freedom. In the evenings this is a nice place for a romantic walk.
Image by TheCamerons on Flickr under Creative Commons License.
8

After a whole day filled with events, after long walks around Monterey, tired and hungry, we offer you the best thing to do for an evening - rest on the beach. The sand is great in Monterey city, and the ocean is calm and warm in the evenings. Local fast-food, small bars and tiny gift boutiques are placed at the gates. Locals come here for an evening walk, a little beach picnic, some sports and games and family reunions. Among them you will no longer be a visitor, but a real Monterey resident!
Image by Tim Pearce, Los Gatos on Flickr under Creative Commons License.

Religious buildings all around the world are unique in a way. Catholic, protestant and orthodox churches or Muslim mosques - each place of worship has an individual facade, construction type and interiors. A church can say a lot about the history of the country or the city you visit. Of course, the church visitors will be glad to tell you more about the location. This guide will lead you to the...  view more

Usually, when we visit a city, we all flock to its unusual features, buildings, super malls and discos, gift shops and so on. But few of us understand the true meaning of a museum. Art or history, biology or army - all these theme based museums tell us a lot more about the character of the inhabitants, about their hobbies, or, about that particular country's traditions, rules and delights....  view more