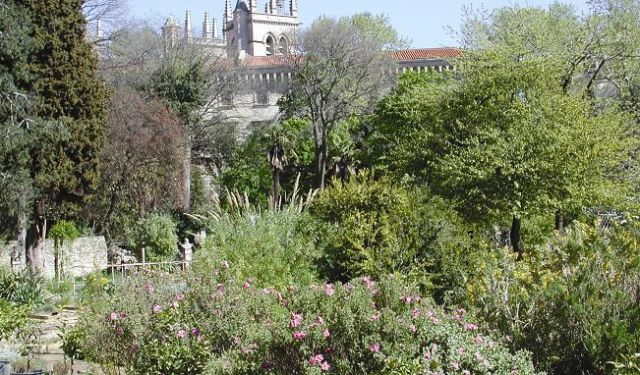 Image by Vpe on Wikimedia under Creative Commons License.

Montpellier is a city with numerous attractions for children of all ages and their parents. The young ones will be happy to savour a delicious ice cream in Cocco e Fragola, watch an entertaining performance in the Théâtre de la Plume and pick a nice toy to take back home from the Pomme de Reinette and Pomme d'Api shop. The kids who are a bit older will enjoy climbing the Water Castle, admiring the exhibits in the Anatomy Museum and walking through the parks.
How it works: Download the app "GPSmyCity: Walks in 1K+ Cities" from iTunes App Store or Google Play to your mobile phone or tablet. The app turns your mobile device into a personal tour guide and its built-in GPS navigation functions guide you from one tour stop to next. The app works offline, so no data plan is needed when traveling abroad.

1) Park of the Guirlande

The Park of the Guirlande was created in 1850 but was acquired by the city in 1978. It is a perfect, quiet place to rest with the children and escape from the noise of the city. Within the Park of the Guirlande, there are many attractions, namely, a small fountain that runs down from the walls of the Jean-Paul Sartre Library, a pond with rocks and shellfishes, a sophisticated playground and of course, numerous benches and beautiful plants and trees.
Image by Andy Roberts on Flickr under Creative Commons License.
2

The Théâtre de la Plume is a very popular children's theatre among the locals and is a perfect way for foreign children to practice French. All the performances organized in the Théâtre de la Plume are interesting and special, the most popular being the national and international fairy tales played by talented and professional actors. Besides spectacles, the theatre periodically organizes parties, festivals, concerts and shows for children of all ages.
Image by Paul-in-London on Flickr under Creative Commons License.
3

The Water Castle is a catchment basin designed as a monument. It is located in the Peyrou park. The Water Castle was built in 1768 by Jean-Antoine Giral. The monument is fed by a 14-kilometre aqueduct. The construction, though reminiscent of a triumphal arc, has a hexagonal form and is adorned with Corinthian columns. The most fun thing about the Water Castle is that admirers can climb to the top and enjoy the perfect panorama of the city, as well as the Cévennes Mountains.
Image by Vincent Ramos on Wikimedia under Creative Commons License.
4

The Jardin des Plantes de Montpellier (4.5 hectares) is a historic botanical garden and arboretum. The garden was established in 1593 by a letters patent from King Henri IV, under the leadership of Pierre Richer de Belleval, professor of botany and anatomy. It is France's oldest botanical garden, inspired by the Orto botanico di Padova (1545). In turn, it serves as a model for the Jardin des Plantes de Paris (1626). The Montagne de Richer lies within the garden's oldest section, which now contains a systematic garden. The garden was expanded twice in the nineteenth century. Its orangery was designed by Claude-Mathieu Delagardette and completed in 1804; the arboretum was landscaped in 1810, and the English Garden, with pool and greenhouse, dates from 1859. The monumental Martins greenhouse opened in 1860. Today the garden contains about 2,680 plant species, 500 of which are native to the Mediterranean region. Of these, roughly 2,000 species are grown outdoors and 1,000 under glass.

Image by xfce on Flickr under Creative Commons License.
Sight description based on wikipedia
5

The Anatomy Museum was initiated in 1794. It is located in the building of the Faculty of Medicine. The collection of the museum includes approximately five thousand showpieces. The walls of the museum are decorated with the portraits of notorious doctors who made a difference in medicine. The pride of the museum, though, is the Anatomical Theatre - a staging of the surgical processes. The Anatomy Museum in Montpellier is the biggest of its kind in the entire country.
Image by Vpe on Wikimedia under Creative Commons License.
6

Pomme de Reinette et Pomme d'Api is a paradise shop for children of all ages and for their parents. The toys provided by the shop are produced in classical and traditional manner. Many of them directly represent the French culture and style - the music boxes and "Madame Tussauds" masks. Besides toys, the shop has diverse souvenirs, school accessories and decoration elements for children's rooms.

Image by evelynishere on Flickr under Creative Commons License.