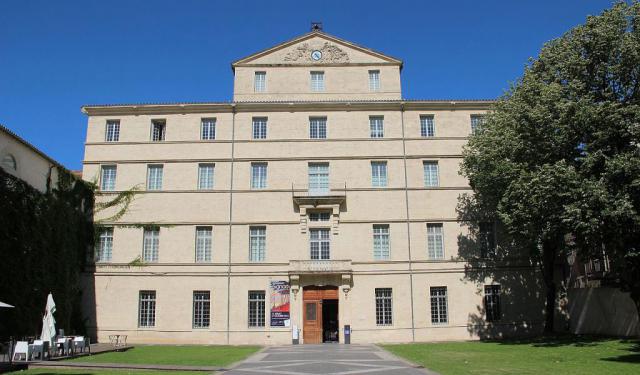 Image by Björn S. on Wikimedia under Creative Commons License.

The museums of Montpellier are an important part of the city's culture and history. They not only provide external decoration to the city's panorama, but they also concentrate on the far-reaching evolution of the art and other branches (medicine, history). Over the centuries, Montpellier has had the chance to gain an impressive amount of precious showpieces which are definitely an important attraction for visitors.
How it works: Download the app "GPSmyCity: Walks in 1K+ Cities" from iTunes App Store or Google Play to your mobile phone or tablet. The app turns your mobile device into a personal tour guide and its built-in GPS navigation functions guide you from one tour stop to next. The app works offline, so no data plan is needed when traveling abroad.

The Musée Fabre was founded by François-Xavier Fabre, a Montpellier painter, in 1825. Beginning in 2003, the museum underwent a 61.2 million euro renovation, which was completed in January 2007. It is one of the main sights of Montpellier and close to the city's main square, the Place de la Comédie. The museum's national importance is recognized by it being classified as a Musée de France by the French Ministry of Culture.

On display are ceramics from Greece and the rest of Europe. Furthermore, the museum has a large collection of paintings from the 17th until the 19th century, with a large representation of the luminophiles movement. In 1825, the town council accepted a large donation of works from Fabre and the museum was installed in the refurbished Hôtel de Massillian, officially opened on 3 December 1828. Fabre's generosity led others to follow his example, notably Antoine Valedau who donated his collection of Dutch and Flemish masters to the city.

On the death of Fabre in 1837, a legacy of more than a hundred pictures and drawings completed the collection. In 1864, Jules Bonnet-Mel, an art collector from Pézenas, bequeathed 400 drawings and 28 paintings. In 1868, Alfred Bruyas offered the works from his private gallery to the city. He is credited with having moved the museum collection into the modern era. In 1870, Jules Canonge, from Nîmes, gave a collection of more than 350 drawings. A legacy of Bruyas of more than 200 works completed his gift in 1877.

Image by Jean-Marie DAVID Dinkley on Wikimedia under Creative Commons License.
Sight description based on wikipedia
2

The Sabatier d'Eysperan Museum is hosted by an ancient house, built in the nineteenth century. The museum is directly linked to the Fabre Museum, many showpieces belonging to the latter. Sabatier d'Eysperan focuses mainly on the exhibition of furnishing, paintings, vases and sculptures. The second floor of the building consists of a big hall decorated with Corinthian columns. The pride of the museum is a collection of sculptures whose author is the famous Augustin Pajou.
Image by Alain Diez on Flickr under Creative Commons License.
3

The Museum of Old Montpellier is located in Hôtel de Varennes, decorated with woodworks from the 18th century. The museum consists of several rooms with different themes. The first room begins with engravings and water colors and the second holds the office of Mr Pagézy, the mayor who transformed the city under the Second Empire. The best department of the museum is undoubtedly the black Virgin, a Madonna with a child, a polychrome wooden statuette from the eighteenth century.

Since 1991, the building hosts a popular contemporary art gallery - "Carre Saint Anne". The building hosts exhibitions of paintings, photographs and other graphic pieces, featuring varied artistic trends. The manager, Dominique Thévenot, is very interested in promoting creative young persons of the region. Admission is free all year long, with exceptions during the biennial of creative young persons.
Image by Philipp Hertzog on Wikimedia under Creative Commons License.
5

The Anatomy Museum was initiated in 1794. It is located in the building of the Faculty of Medicine. The collection of the museum includes approximately five thousand showpieces. The walls of the museum are decorated with the portraits of notorious doctors who made a difference in medicine. The pride of the museum, though, is the Anatomical Theatre - a staging of the surgical processes. The Anatomy Museum in Montpellier is the biggest of its kind in the entire country.
Image by Vpe on Wikimedia under Creative Commons License.
6

The Atger Museum has the second biggest collection of artwork after the Louvre in Paris. Besides its inner value, Atger Museum is also the most ancient museum in Montpellier. Its initiator is Xavier Atger. Since 1990, it has about 500 drawings on display in two separate rooms, featuring various styles: fancy motives, landscapes, caricatures and human and animal physiognomies. The museum is located on the second floor of the Faculty of Medicine.