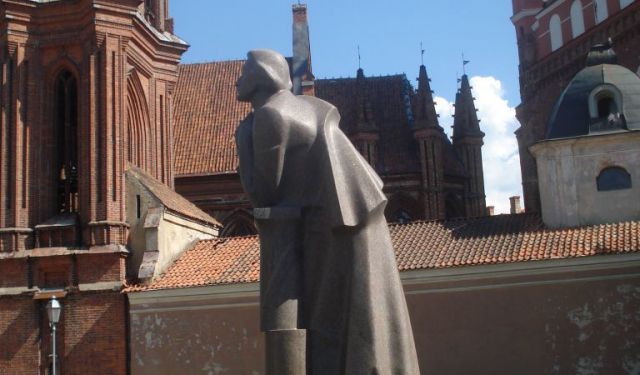 Image by Alma Pater on Wikimedia under Creative Commons License.

Monuments of Vilnius (Self Guided), Vilnius

If you are interested in the different kinds of monuments a city has to offer, than Vilnius is a fantastic destination due to its rich history and heritage. The city features such famous monuments as the Frank Zappa Statue, Gediminas Monument, Uzupis Angel Statue, and many more.
How it works: Download the app "GPSmyCity: Walks in 1K+ Cities" from iTunes App Store or Google Play to your mobile phone or tablet. The app turns your mobile device into a personal tour guide and its built-in GPS navigation functions guide you from one tour stop to next. The app works offline, so no data plan is needed when traveling abroad.

A monument to Mindaugas is located in the front of the National Museum of Lithuania. The monument was created by Regimantas Midvikis and portrays the only King of Lithuania sitting on his sostas and holding the royal regalia.
Image by Wojsyl on Wikimedia under Creative Commons License.
2

A monument to the Grand Duke of Lithuania was unveiled in 1996. It was created by sculptor Vytautas Kašuba. The statue is located on the Cathedral Square near the Royal Palace and the Cathedral of Vilnius.
Image by tm-tm on Flickr under Creative Commons License.
3

A monument to Adomas Mickevičius is located near St. Anne's Church and Bernardine Church. The statue was designed by Gediminas Jokūbonis and is a beautiful monument to an outstanding person. Adam Bernard Mickiewicz was born in 1798. He was a Polish national poet, dramatist, essayist, publicist, translator, professor. A principal figure in Polish Romanticism, he is counted one of Poland's "Three Bards" ("Trzej Wieszcze") and is widely regarded as Poland's greatest poet.
Image by Kontis Satunas on Wikimedia under Creative Commons License.
Sight description based on wikipedia
4

During the Cold War, liberty of expression was extremely limited in Eastern Europe. When this artless period ended, the restrained expressions overflowed. Uzupis Angel was unveiled in 2001. It represents Lithuania’s freedom and independence. The monument features an angel blowing a trumpet. The sculptor of the angel statue, Romas Vilčiauskas, is also the creator of the Užhupis Mermaid.
Previously, a temporary sculpture of an egg stood in its place. After being replaced by the larger statue of Gabriel, the egg was sold at an auction for 10,200 litas and now stands on Pylimo street.
Image by lostajy on Flickr under Creative Commons License.
Sight description based on wikipedia
5

Kristijonas Donelaitis was one of the most original European writers of the Enlightenment, which is a classic of Lithuanian literature. The monument of Kristijonas Donelaitis is located by the northern building of Vilnius University. It was created by sculptor Konstantinas Bogdanas.
Image by igor.si on Flickr under Creative Commons License.