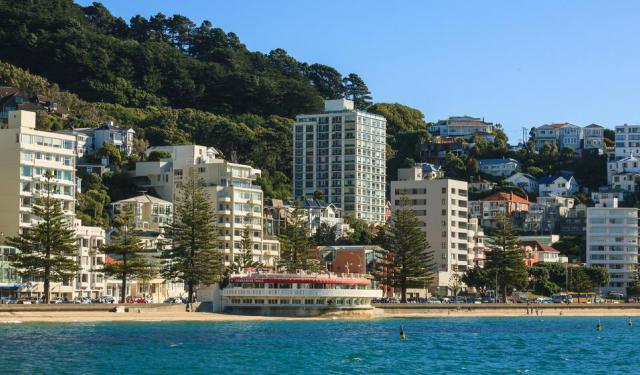 Image by alh1 on Flickr under Creative Commons License.

Mount Victoria and Its Surroundings (Self Guided), Wellington

Mount Victoria is a hill, 196 meters high, in Wellington. It offers incredible views of the sea and the city, and there are some very popular attractions at its foot. This self-guided tour will lead you through the most special places of this part of Wellington.
How it works: Download the app "GPSmyCity: Walks in 1K+ Cities" from iTunes App Store or Google Play to your mobile phone or tablet. The app turns your mobile device into a personal tour guide and its built-in GPS navigation functions guide you from one tour stop to next. The app works offline, so no data plan is needed when traveling abroad.

Oriental Bay Beach is one of the best beaches in Wellington. This is also a beloved waterfront walk where one can see several sculptures, such as the tail of the whale, and walk on the pier. The beach is very popular for its champagne-colored sand brought from Takaka, South Island.
Image by PhillipC on Flickr under Creative Commons License.
2

Built in 1932, funded by public donations, the three storied Monastery was constructed as a home for the Redemptorists.

Image by PM on Wikimedia under Creative Commons License.
Sight description based on wikipedia
3

From the top of Mount Victoria you can contemplate the panoramic view of the city, bay, docks, and even the far away Hutt Valley. At the very top, you will find the Byrd Memorial. Byrd was the first person to fly over the South Pole in a plane. The memorial is in the form of a tent that was used during Antarctic expeditions.
Image by Brett Taylor on Wikimedia under Creative Commons License.
4

The Greek Orthodox Cathedral of the Annunciation, located on Mount Victoria, was build in the 1940s, it is one of the very few Greek Orthodox churches in Wellington. The distinctive Byzantine-syle domed Greek Orthodox Church - The Annunciation of the Virgin Mary was consecrated in 1970 by Metropolitan Dionysios Psiachas, the first Archbishop of the Holy Metropolis of New Zealand. The current Metropolitan of New Zealand, Bishop Erithron Amfilochios Tsoukos elevated the church on Hania Street to cathedral status. The church is not very big, but is nevertheless a very distinctive landmark.
Image by Geogre on Wikimedia under Creative Commons License.
Sight description based on wikipedia
5

Government House is the principal residence of the Governor-General of New Zealand.

It was designed by Claude Paton in the office of John Campbell, Government Architect. Built between 1908 and 1910, the house's grounds total 12 ha, and the house is 4200 m². There are 27 bedrooms and 19 bathrooms in total including staff quarters as well as a ballroom, various sitting rooms, state rooms, service rooms and wing offices, all of which are tended to by about 30 staff. The grounds, which have been endorsed as a 'garden of National Significance' covers some 12 ha and includes a police lodge at the main gate.

In 2010 the House celebrated its 100th anniversary.

Image by Nathaniel Dance on Wikimedia under Creative Commons License.
Sight description based on wikipedia
6

Opening Hours: Monday - Sunday: 9:30 am – 5 pm
Image by Pengo on Wikimedia under Creative Commons License.
Sight description based on wikipedia