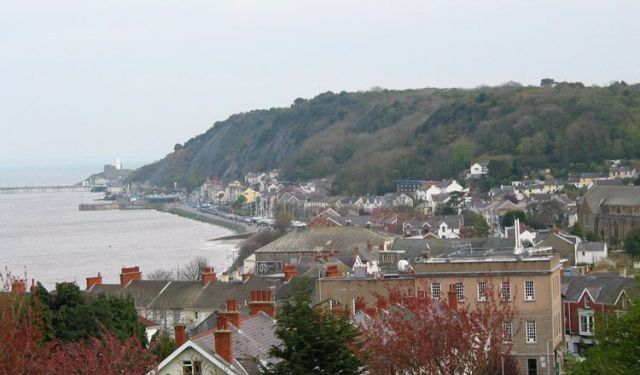 Image by Popsracer on Wikimedia under Creative Commons License.

Mumbles will fascinate you from the second you step on its land. This area’s history dates back thousands of years; there is evidence of 3000 year-old artifacts displayed at the Swansea Museum, such as flint axe-heads found on Mumbles Hill. Who knows, maybe you will be lucky enough to discover some relics while walking on the mysterious lands of Mumbles. Take this tour and visit the most prominent venues of Mumbles.
How it works: Download the app "GPSmyCity: Walks in 1K+ Cities" from iTunes App Store or Google Play to your mobile phone or tablet. The app turns your mobile device into a personal tour guide and its built-in GPS navigation functions guide you from one tour stop to next. The app works offline, so no data plan is needed when traveling abroad.

Every trip “gives life” to many pleasant memories, which one would want to keep. The best way to do it is to purchase a memento. At Oyster Gallery you are given the chance to bring the ocean breeze back to your home. This amazing emporium is a popular art gallery, framing specialist and a gift shop. It boasts genuine works by local artists such as Sue Davis, Annabel Dann and Clive Jenkins, to name just a few. And of course you will not be able to take your eyes off the marine home accessories; these will surely remind you of Mumbles and of wonderful Swansea Bay.

Image by jdn on Flickr under Creative Commons License.
2

Oystermouth Castle (Castell Ystum Llwynarth) is a Norman stone castle, overlooking Swansea Bay on the east side of the Gower Peninsula near the village of the Mumbles.

The first castle was founded by William de Londres of Ogmore Castle soon after 1106 following the capture of Gower by the Normans.

The de Braose dynasty could afford to rebuild it in stone. A high curtain wall was built, internal buildings added, a chapel, basements,three storey residential buildings with fireplaces and garderobes on each floor.

After the Middle Ages, the castle gradually fell into ruin. It was restored by George Grant Francis in the 1840s while the castle was owned by the then Duke of Beaufort.

Remnants of an ornate medieval painting dating back to the 14th century have recently been found in the chapel.The surviving painting is thought to be over 700 years old. It's thought the painting is both highly important and testimony to the original design of the chapel attributed to Alina de Breos.

Following the first phase of conservation works, Oystermouth Castle reopened to the public in mid July 2011.The scheme includes new visitor facilities, an educational space and a 30-foot high glass viewing platform and bridge that leads to Alina's Chapel. The chapel marks the attraction's highest architectural point and features a tracery window with views over Swansea Bay.


Image by Nigel Davies on Wikimedia under Creative Commons License.
Sight description based on wikipedia
3

Mumbles Methodist Church is a multifunctional venue. It comprises a coffee shop, tourist information centre, meeting rooms and of course a special area for worship. The community has a special interest in the church’s building, because it is a Grade II listed building, so it needed refurbishment that would retain the original touch of its founder. The church witnessed countless couples joining in union and there will be many more to come. The church’s role in the Mumbles’ community life is incontestable.
Image by Andrew Robertson on Flickr under Creative Commons License.
4

All Saints Church is one of the two churches belonging to the Parish of Oystermouth. It is said that the church has been a worship place for at least a thousand years. The church boasts gifts which were presented to it during the 20th century, such as the Rood Screen, East Window and the painful Lifeboat Memorial Window. The last one is like a mirror of the well known lifeboat disaster, which happened in 1947, when an entire crew of eight people was lost. The church welcomes believers and it is seen as a lively home for all Christians.
Image by Mark Hogan on Wikimedia under Creative Commons License.
5

If you enjoy walking, the Mumbles Hill Nature Reserve will suit you best. Charge your “batteries” and let the trip begin! You will get to see the best views Swansea has to offer if you just follow the secret paths skillfully “drawn” by curious fellows just like you. Contemplate Mumbles plant life, observe wild habitants such as foxes, shrews, voles, birds like the green woodpecker and the jay and discover remnants from World War II. All of these are part of one package you won’t be able to resist.
Image by Andrew Green on Flickr under Creative Commons License.
6

Mumbles Pier is a 225 meters long tribute to Victorian architecture. It was built in 1898, and then closed and reopened due to some extremely necessary refurbishment measures: the renewal of the steel around the entrance, in 1987. Next to the pier, you can pop into the Mumbles Lifeboat Museum. Here you will find historical records of lifeboat in Mumbles and real equipment used by several crews in the past. Today, at the pier, you can enjoy an ice-cream, be mesmerized by the views of the bay and have fun at the amusement arcades, which are in operation since 1937.
Image by Wiccasha on Wikimedia under Creative Commons License.
7

The Big Apple is an important landmark for locals in Mumbles, though not just for locals. It seems that the Mumbles Apple is the last remaining apple kiosk from the whole series created in the 1930s. The building and distribution of the series in seaside towns was meant to serve as publicity for some apple-flavoured soft drink. Today, the Big Apple sells snacks and seaside essentials.
Image by Huw J Long on Flickr under Creative Commons License.
8

Mumbles Lighthouse (completed in 1794) is a lighthouse, which sits on the outer of two islands off Mumbles Head, is clearly visible from any point along the five mile sweep of Swansea Bay. Along with the nearby lifeboat station, it is the most photographed landmark in the village.

In 1860, the oil powered light was upgraded to a dioptric light and the fort that surrounds the tower was built by the War Department. In 1905, an occulting mechanism, where the light was made to flash, was fitted. This was partially automated in 1934. By 1977, the cast iron lantern had deteriorated beyond repair and was removed. A different lantern was added in 1987. In 1995, the main light was replaced and an array of solar panels and emergency monitoring equipment were added.
Image by Lilo Lil on Wikimedia under Creative Commons License.
Sight description based on wikipedia