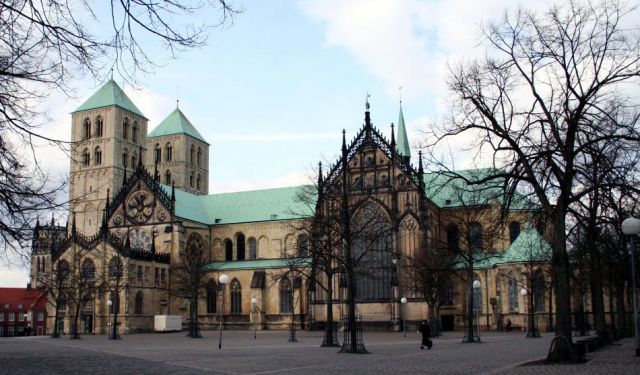 Münster is a wonderful place for those who are interested in religious architecture. The old town district features many beautiful Gothic, Romanesque, Classicism, and Baroque-style churches. Take this tour to explore the Westphalian religious heritage.
Image Courtesy of Wikimedia and ML Carl.
How it works: Download the app "GPSmyCity: Walks in 1K+ Cities" from iTunes App Store or Google Play to your mobile phone or tablet. The app turns your mobile device into a personal tour guide and its built-in GPS navigation functions guide you from one tour stop to next. The app works offline, so no data plan is needed when traveling abroad.

St. Antonius catholic church belongs to the parish of St. Joseph in Münster. The church building was designed in 1914 by German architect Ludwig Becker. It was planned as a neo-church, displaying the important aspects of Baroque style with a transept and a large dome built over the crossing. The church was seriously damaged during the Second World War, but by 1949 the building was reconstructed under the guidance of the renowned German architects Dominic and Gottfried Böhm. The structure was simplified, the new building didn't have a dome and transept. The interior was carefully restored, creating a new hall, full of light and air, with beautiful large semi-domes on the sides. The ceiling was made out of many parallel ridges resulting in an impressive picture. One of the main features of the church is the large west window sporting an amazing stained glass created by Vinzenz Pieper.
Image Courtesy of Flickr and domjisch.
2

The Church of St. Ludgeri is one of the oldest religious buildings in Westphalia. It was inaugurated in 1173 and has gone through multiple changes before reaching its present exterior style. Initially the church was made of wood, but regardless of this, the premises looked very beautiful and created the impression of true greatness. About three hundred years later, the church was damaged by a fire and rebuilt in a different style. The choir was vastly enlarged on the east side and two Romanesque style towers were added to the sides. The St. Ludgeri Church also maintains some Gothic details, including panel painting, stained glass, fresco and illuminated manuscripts. The tall, majestic tower dominates over the construction, it is crowned with beautiful stained windows and refined ironwork spires. The interior showcases pure Gothic style and is considered to be one of the most important models of Medieval art in Münster.
Image Courtesy of Wikimedia and Johannes Maximilian.
3

St. Aegidii Church, alike St. Ludgeri, is one of the oldest parishes in Münster. It dates back to the end of the 12th century and is located in the historical center of the city. The first parish of St. Aegidii was established in 1174, and there is documented evidence of its existence during this early period. In 1184, the church was used as the base for the first Cistercians Monastery in Westphalia. In 1821, this church collapsed and was demolished to be rebuilt 100 meters further to the east in pure Classicism style. The construction process was planned and controlled by the German architect, Johann Conrad Schlaun on the request of the Capuchin Parish.
Image Courtesy of Wikimedia and Dietmar Rabich.
4

The St. Petri is a Catholic Church in Münster. This church is famous for having wonderful acoustics and is often used for sacred concerts, various official ceremonies, as well as for weddings. The church was built during a 7-year period (1590-1597) by architect and construction manager, Johann Roßkott. The church has been designed as a basilica-type building without a transept. The exterior walls were built of red brick and light sandstone was used for the structural elements. On the inside, the two floors are divided into galleries by elegant arches. Stylistically, St. Petri Church could be attributed to the harmonious combination of the Gothic and Renaissance styles. The whole structure of the church creates an impression of a sound and secure Holy dwelling.
Image Courtesy of Wikimedia and Rabanus Flavus.
5

Münster Cathedral (St. Paulus Dom) is a cathedral in the German city of Münster. It is the city's main church and one of its most important historical monuments, as well as the center of the Diocese of Münster since Diocese's foundation in 805. Perhaps the most famous feature of the cathedral is its astronomical clock. Unlike modern clocks, the Münster clock is divided into 24 hours, runs counterclockwise, and indicates hours and minutes simultaneously. Since the clock faces south, the hands thus follow the actual course of the sun. The main hand, decorated with a silver sun and a rainbow, indicates the time. Each red and white line within the circle of Roman numerals represents four minutes. Five minor hands indicate the position of the planets Jupiter, Mars, Venus, Saturn and Mercury, while a silver ball (half painted black) represents the moon in its phases.
Image Courtesy of Wikimedia and Dietmar Rabich.
Sight description based on Wikipedia.
6

The Überwasserkirche is a Gothic church in the western part of the city of Münster, Westphalia. Its name is translated from German as "Over the water" and originates from the fact that it is located west of the St. Paulus Dom, on the opposite side of the Münstersche Aa river. During the Middle Ages, the church was used as a school for young women of noble birth and for this reason the parish is also known as Liebfrauenkirche, which means the “Church of the Loving Women”.
Image Courtesy of Wikimedia and Dietmar Rabich.
7

The Observantenkirche is an Evangelical Church, built in 1694 by the Franciscan monks. The building was raised by two renown architects Anton Hülse and Johann Bavra. The interior of the church was richly decorated by religious paintings and icons, donated by the wealthier parishioners. Up to the end of the 17th century the church was equipped with the altar, organ and three bells. During the period from 18th till 20th century, the fate of the church was less than fortunate. During the French invasion, the building was used as barracks or mews, as well as a stock place, and all the church equipment was auctioned off. While during the Second World War, the church was almost destroyed by Allied bombing. The full restoration started in 1958 and in May of 1961 the church was transferred to the Evangelical Theological Faculty of the University of Westphalia. The contemporary church is built from red brick and the southwest facade is made with Westphalian light sandstone. The main premises of the Observantenkirche are constructed in pseudo-Gothic style.
Image Courtesy of Wikimedia and Rüdiger Wölk, Münster.
8

The St. Johannes Kapelle (St. John's Chapel) in Münster is a small Gothic church, built in the northwest of the historic old town. The chapel represents a tower-less building with buttresses and sandstone soffits. The west portal of the construction shows clear details of Renaissance style. The inside is rather small, but even so, it is decorated with vaulted ceilings and stained glass windows. During the early 14th century, the chapel used to be a branch of the Steinfurt Knights Commandery. Luckily, the St. Johannes Kapelle was just slightly damaged during Second World War and needed only lightweight restoration, after which it hasn't been changed at all.
Image Courtesy of Wikimedia and Rabanus Flavus.