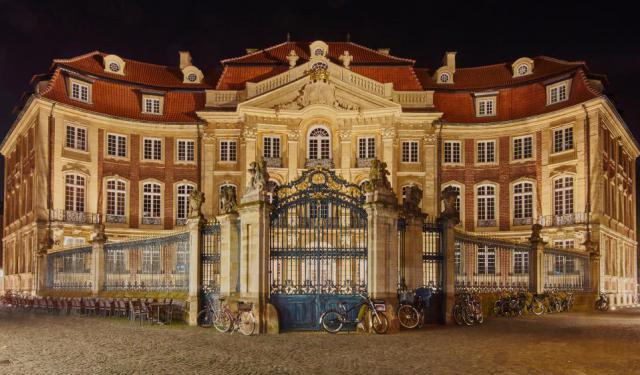 The city of Münster dates back to 793, when a monastery was built on the right bank of the river Aa. This was the historic “headspring” of the town named “Monastery”. Consequently, one could claim it was destined for the new city to glorify the religion. Today, Munster is known for its numerous religious buildings and this tour aims to show you the most beautiful and inimitable of them.
Image Courtesy of Wikimedia and Dietmar Rabich.
How it works: Download the app "GPSmyCity: Walks in 1K+ Cities" from iTunes App Store or Google Play to your mobile phone or tablet. The app turns your mobile device into a personal tour guide and its built-in GPS navigation functions guide you from one tour stop to next. The app works offline, so no data plan is needed when traveling abroad.

The Heilig Kreuz Kirche (Holy Cross Church) is located in the center of the north Promenade alley in Münster. The Heilig Kreuz Kirche was built in 1902 by the Bernhard and Hilger Hertel. The church building represent the grandiose structure crowned with a 87 meter tower, seen from all parts of the old town. The building is designed in the neo-Gothic cross-plan style.
Image Courtesy of Wikimedia and Knoe.
2

St. Martin is one of the oldest religious buildings in Münster. Relying on indirect sources, historians presume that the church was established around the year 1187. The original building wasn't preserved till the present day however and the contemporary exterior of the church is the result of multiple reconstructions. One of the most serious restorations took place in 1760 under the leadership of German architect Johann Schlaun, who replaced the pointed roof of the Romanesque tower with a Baroque dome, the one we witness today.
Image Courtesy of Wikimedia and Dietmar Rabich.
3

The Apostelkirche is a protestant church, it is located in the northern part of the historic old town of Münster. The church was built in the second half of the 13th century as a monastery church for the Conventual Franciscans. It is considered to be the oldest building of its type in the city. During the centuries of its existence, the building was reconstructed several times and at the moment represents pure Gothic style. During the Second World War, the church was severely damaged and the reconstruction process was completed only in 1960. The interior of the church was also carefully restored with addition of contemporary ceiling paintings, simultaneously maintaining the clearly structured Gothic hall, as well as plain and simple nave windows, so that the church appears to be full of light.
Image Courtesy of Wikimedia and Roland Geider.
4

The Lambertikirche (St. Lamberti Church) is located at the crossroads of the two oldest streets in Münster, in the heart of the old town. The church building is considered to be a pure demonstration of late Gothic style in Westphalia. The church has maintained a curious tradition- every night, except Tuesdays, the tower keeper climbs the clock tower and blows his horn every half an hour, from 9pm to midnight. This tradition has also been maintained in Bad Wimpfen, Nördlingen and Krakow. The construction of the church dates back to the 14th century. Since that time, the building has been restored and reconstructed several times before it has reached the shape it demonstrates today. The amazing Gothic tower of the church was built in 1889 by two young architects, Hilger and Bernhard Hertel. During the Second World War, the roof and the tower were partially destroyed. The reconstruction works continued until 1959. The Lambertikirche has one more interesting and scary feature – the baptist baskets. In 1535 these baskets were attached to the tower containing the bodies of Jan van Leiden, Bernd Krechting und Bernd Knipperdolling, after their torture and execution. Today the originals of these baskets are hanging at their historic place as a tourist spectacle.
Image Courtesy of Wikimedia and Günter Seggebäing, Coesfeld.
5

The Dominikanerkirche (Dominican Church) was built by German architect, Lambert Friedrich Corfey, during a 17-year period (1708-1725). The building is designed in Baroque style, with a beautiful sandstone facade and two gracious towers at the eastern part of the construction. The Dominikanerkirche used to be the part of the Dominican Order Monastery, which was totally destroyed during a Second World War Allied bombing. Fortunately, the church building was less damaged. Its restoration was completed by 1974. Today, the Dominican Church is the genuine pearl of the eastern side of the historical center of Münster.
Image Courtesy of Wikimedia and Dietmar Rabich.
6

The Clemenskirche (St. Clemens Church) is a small chapel, located in Münster's old town. It was built during 1745-1753 by a Baroque architect named Johann Conrad Schlaun. The church used to be a part of the Fatebenefratelli hospital. The Clemenskirche is one of the main and, arguably, the most beautiful samples of Westphalian Baroque. Its interior, along with Baroque details, demonstrates Rococo elements; the ceiling is decorated with frescoes, the walls are covered with refined moldings. All these works have been performed by famous artists, such as Johann Adam Schöpf and Jacob Rauch. Today, St. Clemens Church is used not only for worship but also for organ and chamber music concerts.
Image Courtesy of Wikimedia and Karlunun.
7

The St. Servatii Church is listed among the oldest religious buildings in the Westphalian city of Münster, it dates back to the beginning of the 13th century. The St. Servatii is also the smallest of the six medieval parish churches. It harmoniously combines the stylistic elements of late Romanesque and early Gothic architecture. The church is considered to be one of the most beautiful churches in the city, as well as a “must see” spot.
Image Courtesy of Wikimedia and Aarp65.
8

The Erlöserkirche was built in 1950 by German architect Otto Bartning, who used to be head of the construction department of the Evangelical charity society in Neckarsteinach. Subsequently, the Bartning's architectural plan of the Erlöserkirche was used for other churches in Germany. The construction stands on the basement of a neo-Romanesque church built by Karl Siebold and destroyed during Second World War. The only part of the old church that has been preserved is a 15-meter wall in the tower. The tower houses three large bells.
Image Courtesy of Wikimedia and Rüdiger Wölk.