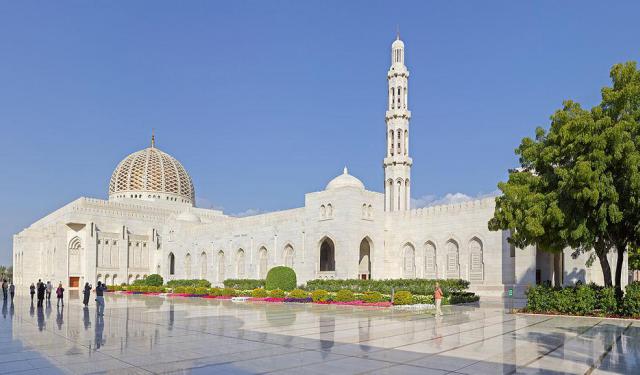 Today's Muscat is a multi-confessional city with many different religious buildings, including beautiful Islamic mosques and a wonderful Protestant Church. Among the mosques, the most notable is the Sultan Qaboos Grand Mosque. Follow this tour to explore Muscat's religious sites.
How it works: Download the app "GPSmyCity: Walks in 1K+ Cities" from iTunes App Store or Google Play to your mobile phone or tablet. The app turns your mobile device into a personal tour guide and its built-in GPS navigation functions guide you from one tour stop to next. The app works offline, so no data plan is needed when traveling abroad.

This Protestant Church is located in Ghala, one of Muscat’s districts, behind the Grand Mosque. The Ghala Church serves a Christian community in Oman who keep it rather busy during the week. The church has a lively morning service on Fridays and a more traditional service every other day at 11 am.
Image by jmwk on Flickr under Creative Commons License.
2

The Sultan Qaboos Grand Mosque is the main Mosque in the Sultanate of Oman. In 1992 Sultan Qaboos directed that his country of Oman should have a Grand Mosque. A competition for its design took place in 1993 and after a site was chosen at Bausher construction commenced in 1995. Building work, which was undertaken by Carillion Alawi LLC took six years and four months.

The Mosque is built from 300,000 tonnes of Indian sandstone. The main musalla (prayer hall) is square (external dimensions 74.4 x 74.4 metres) with a central dome rising to a height of fifty metres above the floor. The dome and the main minaret (90 metres) and four flanking minarets (45.5 metres) are the mosque’s chief visual features. The main musalla can hold over 6,500 worshipers, while the women’s musalla can accommodate 750 worshipers. The outer paved ground can hold 8,000 worshipers and there is additional space available in the interior courtyard and the passageways, making a total capacity of up to 20,000 worshipers.

A major feature of the design of the interior is the prayer carpet which covers the floor of the prayer hall. It contains, 1,700,000 knots, weighs 21 tonnes and took four years to produce, and brings together the classical Tabriz, Kashan and Isfahan design traditions. It is the second largest single piece carpet in the world. The carpet measures over 70 × 60 meters, and covers the 4,343 square meter area of the praying hall, all in a single piece.

Image by Ian and Wendy Sewell on Wikimedia under Creative Commons License.
Sight description based on wikipedia
3

Al Touba Masjid or Al Touba Mosque is located between the Al Azaiba and Medinat Qaboos neighborhoods. Similarly to other Muscat mosques, it represents a magnificent piece of Islamic architecture and is quite popular with both locals and tourists.
Image by rubber bullets on Flickr under Creative Commons License.
4

Abu Sumer is a religious place where you can learn about the world's earliest known civilization and its religion. Scientists say that the Sumerians were the first to write down their beliefs. Eventually, those beliefs found reflection in Mesopotamian mythology and astrology.
Image by GViciano on Flickr under Creative Commons License.
5

Zawawi Mosque is a beautiful Muscat mosque, located very close to the Natural History Museum. It is a gift to the people of Oman by the Zawawi family. The mosque represents a grand religious site with a high minaret.
Image by Adam Houlston on Wikimedia under Creative Commons License.

Create Your Own Walk in Muscat

Creating your own self-guided walk in Muscat is easy and fun. Choose the city attractions that you want to see and a walk route map will be created just for you. You can even set your hotel as the start point of the walk.

Muttrah, an administrative district within the Muscat province, is a formerly major commercial hub of Oman, boasting one of the largest harbors and sea ports in the region. The city's fish market is one of the city's main attractions. Other landmarks include the Bait al-Baranda museum, the scenic Muttrah corniche, Jama Mosque, and Souq Muttrah, a traditional bazaar. To explore the most...  view more

Muscat is the wonderful capital city of a magnificent country which is known for picturesque beaches, beautiful mosques, historic forts, old gates, a splendid royal palace, scenic gardens, natural parks and other interesting sights. The majesty and splendor of Muscat's landmarks remind about the city's glorious past and rich culture. Check out the most popular landmarks in Muscat in the...  view more

Ruwi is a commercial hub and the main business area of Muscat, the capital of the Sultanate of Oman. Among the key attractions here is a variety of multi-confessional religious buildings, an interesting and informative National Museum, and a beautiful Clock Tower and Park. Take the following tour to discover this wonderful part of Muscat.