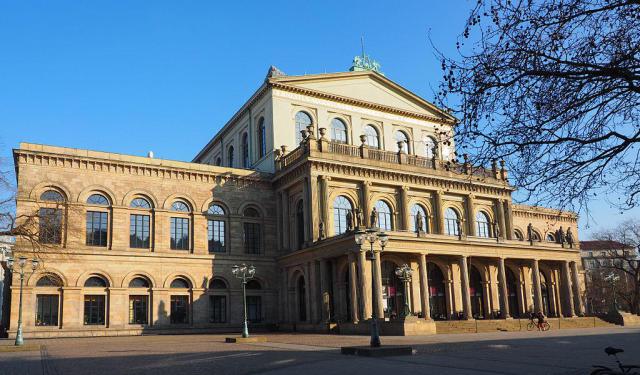 Image by Hajotthu on Wikimedia under Creative Commons License.

Musems and Theatres (Self Guided), Hannover

Hannover is the leading cultural center of the Lower-Saxony Region. Here you can spend days if not weeks enjoying the different sights. Take our Cultural Walk to see all the best museums, galleries and theaters the city has to offer.
How it works: Download the app "GPSmyCity: Walks in 1K+ Cities" from iTunes App Store or Google Play to your mobile phone or tablet. The app turns your mobile device into a personal tour guide and its built-in GPS navigation functions guide you from one tour stop to next. The app works offline, so no data plan is needed when traveling abroad.

The Kestnergesellshaft is one of the largest and best known art institutions in Germany. Its focus on contemporary art has brought creativity and innovation to the masses since it opened in 1916. Since its inception it has proudly provided installations of some of the most exciting artists of the 20th and 21st centuries. The Kestnergesellschaft not only showcases paintings and sculpture, but also draws on design, architecture, fashion, literature, philosophy, humanities and music. In 1936 the museum was temporarily closed under pressure from the Nazi government since it was deemed to be showcasing degenerate art. Following the war, the museum was reopened by publicly minded Hannover residents, Hermann Bahlsen, Wilhelm Stichweh, Bernhard Sprengel, and Günther Beindorff.

In the 1990s the original building could no longer meet the technological needs of the museum and a new space was sought. Some of the premier artists of recent times have displayed their works in the Kestnergesellschaft, including: Picasso, Kandinsky, Klee, El Lissitzky, Warhol and Miro. There is always a dynamic range of exhibitions and educational programs happening at the museum making it an exciting experience for art lovers. Closed on Mondays, the Kestnergesellschaft is open from 11am to 6pm Tuesday to Sunday and until 8pm on Thursdays. There are free guided tours offered at certain times throughout the day.

Image by Friedrich, Caspar David on Wikimedia under Creative Commons License.
Sight description based on wikipedia
2

The Hannover History Museum recounts the history of Hannover and the region since the foundation of the city in 1100 to the present day. The museum is divided into different sections, one of which focuses on the strong ties between Hannover and the English Royal Family between 1714 and 1834. Seamlessly combining the museum with tangible local history, it is housed in the Beginenturm, which is the largest surviving portion of the city wall fortifications.

Artifacts and displays at the museum highlight religious, cultural and folklore aspects of Hannover’s history. Visitors’ favorite museum pieces tend to be the four House of Hannover royal coaches, which are ornately decorated. There are many relics and paraphernalia from the days when the Guelfs ruled the region, including medals, portraits, costumes and flags. In addition to learning more about the Royal House of Hannover, you can learn a great deal about the folklore and stories of the common people dating from medieval times. There is also a fascinating car from 1928 that predated the Volkswagen and served as a model for the omnipotent German car.


Image by Axel Hindemith on Wikimedia under Creative Commons License.
3

A visit to the Kestner Museum in Hannover is an opportunity to experience a range of Egyptian and Greek classical antiquities. The museum is named after August Kestner, who was a private collector during the 18th century and bequeathed his pieces to the city of Hannover under the custodianship of his nephew Hermann. In 1887 the collection was boosted by another bequeathal of medieval items and the museum was opened to the public in 1889. The museum is currently divided into different collections that visitors can enjoy discovering.

The Ancient Egyptian Art collection covers an expansive time period from 4000 B.C through to the Roman era. There are many papyrus documents, amulets, bas-reliefs, stelae and funerary objects, which are exceptional at bringing to life how the ancient Egyptians lived and their religious beliefs. The Egyptian collection is considered to be one of the world’s most significant. The Classical Antiquities collection features many pieces from ancient Greece and Rome as well as Etruscan artifacts. Among the collection are many coins and medals that date back three millennia.

Why You Should Visit:
So much packed into such a small space! Great way to spend a few hours on a cold or rainy day.
There doesn't seem to be a steady flow of tourists so you'll have a quiet and peaceful experience.

Opening Hours:
Tue, Thu-Sun: 11am-6pm; Wed: 11am-8pm
Free on Fridays after 2 pm; any other time €5
Image by AxelHH on Wikimedia under Creative Commons License.
Sight description based on wikipedia
4

The Sprengel Museum has been one of Hannover’s premier museums since it opened in 1979. With its extensive range of permanent and temporary exhibitions, it is considered one of the world’s major 20th & 21st-century art museums. Initially, the museum was founded around the pieces owned by Dr. Berhnard Sprengel who was an avid collector of German expressionism and French modern art. It has since been added to and now houses major pieces from most eras of contemporary art. There are more than 25 exhibitions each year in addition to the permanent range, as well as symposiums, lectures and workshops, making it a place to be experienced just as much as viewed.

The museum's permanent collection boasts significant pieces by Pablo Picasso and cubism pieces by Henri Laurens. German artists include a wonderful range of surrealist art by Max Ernst as well as honoring the lively art scene that sprang up around Hannover in the 1920s and the abstract expressionism movement of the 1950s. There is also a large collection and focus related to photography and new media.

Why You Should Visit:
Probably the best collection of its sort in Europe.
Well laid out and very reasonable admission-wise.
A lovely terrace café/restaurant and a large library...

The Lower Saxony State Museum is located opposite the City Hall in a superb neo-Renaissance building built in the 19th century. The museum features a large collection of artwork, statues and artifacts from the medieval period right through to the 20th century. Additionally, there are exhibitions within the museum that are devoted to natural history, ethnology and archaeology. Originally called the Museum of Art and Science it was renamed and relocated in 1902 when its collections outgrew available space. The building’s cupola was severely damaged during WWII, but the whole museum underwent extensive renovations in 1995 in preparation for Expo 2000.

The State Gallery features artwork from as far back as the 11th century all the way to the 21st century. There are Renaissance and Baroque pieces along with paintings by German masters and impressionists. In the natural history section, there is a life-size dinosaur as well as a vivarium where more than 2000 species from Lower Saxony region are displayed. The archaeology section is truly impressive with artifacts that showcase more than 500,000 years of human history. The ethnology exhibition has more than 20,000 artifacts from cultures and religions all around the world.

Why You Should Visit:
Truly a world-class gallery – you'll be very surprised at the scope of the collection.
Bright, expansive rooms, modern exhibition concepts and informative descriptions.
Children will love the little aquarium with the piranhas and other exotic species, as well as the opportunities to touch and discover things.

Tip:
Take a close look at the ichthyosaur – it's virtually unique in having embryos fossilized inside of it!
On the ground floor, try the very nice café that faces out towards the inner courtyard.

This traditional playhouse in George Street 54 in Hanover has been open for 47 years. Founded in 1962 by theater enthusiast James von Berlepsch, it has since been visited by more than 1.8 million people. This completely unsubsidized private theater has become a focal point for the local arts and cultural scene.
Image by Xurble on Wikimedia under Creative Commons License.
7

Hannover’s Opera House is one of the city’s most outstanding buildings. The Neo-Classical construction was built between 1847 and 1852 and features impressive columns and a portico. The large portico was originally designed for carriages to drive underneath. It was commissioned under orders of the king, who had considered that the theater in Leineschloss was too small, and was designed by Laves, a prominent German architect of the 19th century. Despite extensive damage caused by bombing during World War II, the Opera House has been restored to its former glory. The first performance at the Opera House was Le Figaro on September 5th, 1852. Today it is extensively used for opera, dance, music concerts and theater.

The interior of the Opera House is opulent with the balcony decorated with busts and statues of famous composers and poets. The acoustics of the theater were improved in 1985 and further renovations were undertaken in 1996 and 1998. The productions put on by the Staatsoper at the Opera House are considered to be among the best in Germany; from March to September each year there is a full calendar of events for opera fans featuring classic and contemporary works.

Why You Should Visit:
Really beautiful from the outside, with a lot of space around the building to make it stand out.
The acoustics are great as also is the standard of the production, given that it is the premier venue for opera in Hannover.
Image by Daniel Schwen on Wikimedia under Creative Commons License.
Sight description based on wikipedia
8

The GOP Variete-Theater is the only such venue in Germany to retain its original stage from as long ago as the turn of the 20th Century. This is the place to go to spend hours with friends and family experiencing the best of German culture. Here you may also enjoy a variety of culinary delights, fine meals or drinks.
Image by AxelHH on Wikimedia under Creative Commons License.